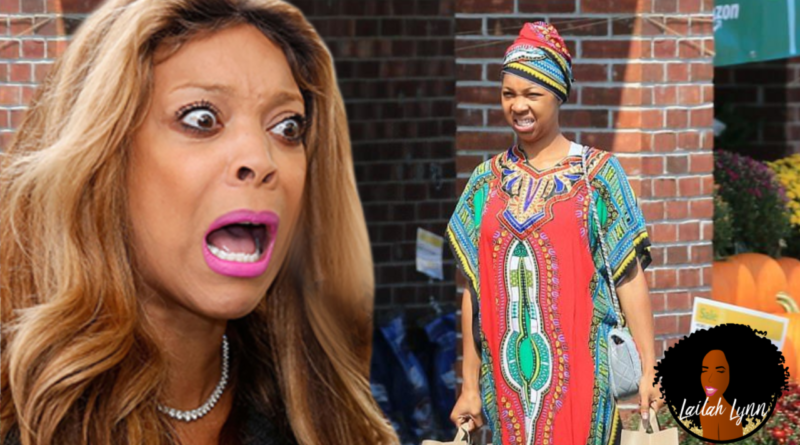 Wendy has been acting very erratically on her show. And I’m not just talking about her sitting so often. If you’ve watched the show lately (when it’s been live-because she’s actually been cancelling shows lately and that’s why the guide says it’s a new show, but it’s actually a re-run) you’ll notice that Wendy now sits when she does audience segments and even when she has guests on her show doing demonstrations. I’m not talking about just that. Wendy has already addressed her balance issues, which are related to the Graves disease.

I’m talking about Wendy just acting plain weird on her show. She’s been stumbling over her words lately more than ever. Her interview with The Lox was a mess! A mess!

And after that interview Wendy actually got on Instagram and explained that she has been high on pain killers. Yes, pain killers, while taping. Which she says explains her erratic behavior. This is what she posted:

So Wendy admitted to being on pain killers, which are affecting her behavior. Meanwhile, an exclusive source close to the Wendy Williams show confirmed to blogger Love B Scott that Wendy Williams is actually self medicating with the prescription pills. But the problems Wendy has, have less to do with her physical health and more to do with her marriage. The source told Love B Scott exclusively,

“[People close to Wendy] suspect she might be self-medicating (either with opioids or prescription pills). [The staff] is routinely having to adjust to her health issues — i.e. not walking out for the beginning of the show, zoning out during segments, etc. They’re really embarrassed about the whole situation.”

And they added that Wendy Williams husband Kevin Hunter’s mistress’ alleged pregnancy is what is driving Wendy crazy. The source said,

“She’s allegedly pregnant and still living just down the street from their house. Word around the show is that they’re going to divorce sometime now that little Kevin has gone college.”

Now this all makes complete sense to me because I’ve always thought that Wendy Williams only stayed married to her husband Kevin because of the child that they share. But now, their child is not a child anymore, and from what I hear he’s actually very mature for his age and considers himself a business man.

Anyway, now that their son is off to college it seems like Wendy and her husband Kevin are going their separate ways, which for Kevin Hunter means starting a family with his alleged mistress Sharina Hudson.

From everything that I’ve read about the situation, people say that Kevin Hunter really is in love with Sharina, not Wendy! And that Sharina’s family has begged her to leave Kevin Hunter but she refuses. And that huge ring she wears on her ring finger is a promise ring from Kevin Hunter, because he’s been promising her that he’s going to be with her in the future, and not Wendy. That’s why they have a house together and everything, because he allegedly plans to be with Sharina in the future and not Wendy.

So, personally, I don’t think Sharina’s pregnancy is an accident or an oops as Wendy would call it.

BTW, do y’all remember when Nick Cannon was on the Wendy Williams show last week and she referred to his youngest son as an “oops baby”. That was so disrespectful! And now it kinda makes sense that Wendy would use that term “oops baby” because her own husband is having a baby without her and she was projecting it onto Nick.

I would say her husband’s having a baby behind her back, but it’s actually right in front of her face. And there’s literally nothing she can do about it.

Anyway, leave a comment and let me know what you think about this situation. Do you think Sharina’s Hudson pregnancy was planned? Or do you think it was “accidental” but just so happened to happen right when Wendy and Kevin’s son is leaving for college?