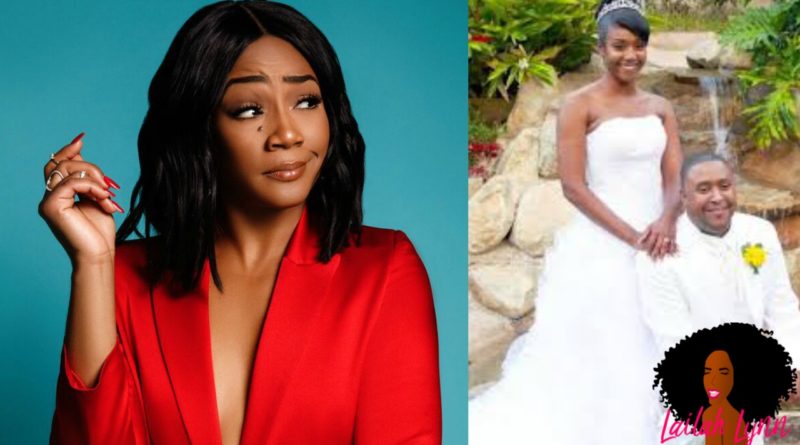 Earlier this year, Tiffany Haddish was sued by her ex-husband, William Stewart, over her memoir, “The Last Black Unicorn.” In the book Tiffany has a chapter titled, “The Ex-Husband,” in which she painted her ex-husband as an abusive stalker during their five-year marriage.  And even though she never mentioned him by name, he still sued her for defamation of character because it was so easy for people to pinpoint him as her ex-husband.

Now, Tiffany’s ex-husband is fighting back against her claims that he abused her by saying she asked him to be “aggressive” with her during sex, including requesting him to choke her!

According to newly-released court documents obtained by The Blast, William Stewart’s lawyers sent several letters to Tiffany Haddish and her publisher Simon &Shuster in an effort to reach a settlement prior to filing a lawsuit.

William Stewart claims he reached out to Tiffany Haddish personally, before making any public statements in an effort to resolve the “harmful and defamatory assertions.” And he claims Haddish responded cryptically, saying,

Be patient your blessings are coming

Start to think positive so positive things can come your way. Because your blessings are waiting on you.

Now, I don’t what Tiffany meant by those cryptic messages but apparently they didn’t do anything to resolve her ex-husband’s frustration with how she portrayed him in her book.  So now he is putting her all the way on blast.

Furthermore, we have information that will demonstrate Ms. Haddish regularly requested Mr. Stewart to become more aggressive with her during sex, including, among other things, to choke her as a part of their sexual intercourse.

Tiffany’s ex-husband also claims that Tiffany gave an interview with comedian Dom Irrera in 2012 where she unequivocally says Stewart never beat her. He claims Tiffany made a joke that

he never beat me up, he just choked me a little bit

and he says that choking was often a punchline in her comedy.

Tiffany’s ex-husband also claims that Tiffany did have a temporary restraining order on him at one point but that she begged the court to drop it and admitted that she had lied on him.

READ  Tamera Mowry-Housley Signs On For A NEW TALK SHOW After Leaving 'The Real'! (Details)
Powered by Inline Related Posts

Tiffany Haddish has admitted to parts of the written book being embellished, but says she told what really happened in the audiobook when she read it.

She even went live to discuss how even she was surprised by some of the things in the book:

#PressPlay: #TiffanyHaddish's memoir #TheLastBlackUnicorn was released last week but there seems to be some discrepancies over what’s true and what was fabricated in the book. Tiffany recently went live and admitted some things may have gotten tweaked during the editing process. This came after multiple sources reported some of the shocking details shared in the book, including an alleged abusive relationship with her ex-husband who she divorced and married twice. __________________________________________ "He grabbed me by the collar, he was like, 'It's time to go to the room now,' in front of everybody," she wrote. "Just snatched me by my shirt, and pulled me to the elevator and threw me in it…once we got to our hotel room, he was so quick. He snatched me by the neck and slammed me into the wall." __________________________________________ She said things got so bad between them that at one point it led to an arrest and miscarriage. Now, Tiffany’s ex-husband is speaking out against the allegations, saying he loves Tiff until his last breath and he never put his hands on her. #Roomies, take a look and tell us your thoughts.

So what do y’all think about Tiffany Haddish’s ex-husband saying she lied on him being abusive in her book and that she requested that he choke her?

Do y’all think he’s going to get any money out of this since Tiffany already admitted to parts of the book being embellished?