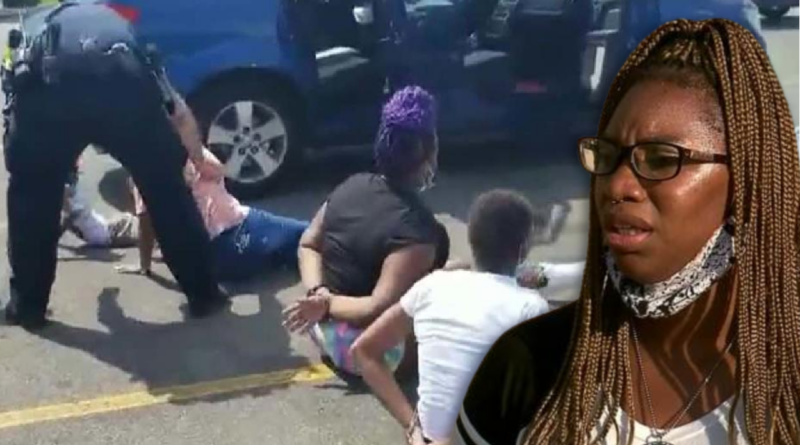 Imagine being a mother wanting to take your daughter’s and your nieces out for a ‘girls day’ as a break from the humdrum of this pandemic. And instead of enjoying a nice day of shopping and getting your nails painted, you’re accosted by police, handcuffed and slammed into the hot pavement.

That nightmare came true for a Brittany Gilliam and her family who were accosted by Aurora, Colorado police, forced to exit their SUV at gunpoint, and handcuffed and forced to lay out on the ground like criminals.

Police in Colorado have apologized after a jaw-dropping video of a Black family being handcuffed at gunpoint began circulating online.

Aurora PD was trending high on Twitter on Tuesday alongside the distressing 90-second clip, which showed a Black woman, along with her children and nieces — one as young as six — spread on the tarmac with their hands pinned behind their backs, surrounded by a team of armed officers.

A spokesperson for the department said officers are trained when contacting a stolen car to do what is called “a high-risk stop,” which is also used when officers know or suspect the occupants are armed.

“In a high-risk stop, weapons are drawn, and occupants are told to exit the car and lie prone on the ground,” Agent Faith Goodrich with APD told 9NEWS. “There is not a written policy regarding when/how we use this stop. Officers can use discretion based on the information they have at the time.”

It later emerged the police believed their SUV was stolen — having confused it with a stolen motorbike.

The five female family members — four of whom are children, aged 17, 14, 12 and six — can be heard wailing in terror as the officers look on, eventually offering to help the driver, later identified as Brittney Gilliam, to sit up off the searing hot tarmac.

In a statement, police later apologized, saying they had received a report of a stolen vehicle at the thrift store parking lot. It later emerged that the stolen vehicle the police were looking for was actually a motorcycle — with Montana plates — that just happened to have the same registration plate number as Gilliam’s Colorado SUV.

Police Chief Vanessa Wilson’s statement, however, only mentions a “vehicle with the same plate information”.

“We want to offer our apologies to the family involved in the involving a police stop of their vehicle,” (SIC) the statement reads.

The incompetence of the police and the Police Chief’s unwillingness to detail the mistake that was made is so familiar to the Black community.

The police in the US are used as instruments of the state and instead of ‘keeping the peace’ they are trained to act aggressively and incite violence. Forcing that woman and her children out of the car was an act of aggression and making them lay out on the hot ground was an act of violence.

And the fact that Colorado police are being trained to do these “high risk stops” and handcuff and slam people on the ground without regard to their age is outrageous!

And their Police Chief’s unwillingness to admit in her statement that the police were sloppy when they confused a Colorado vehicle plate number with a Montana vehicle plate number just shows how egocentric, hostile and inept police leadership is. It starts at the top and it trickles down!

Never forget that the Louisville, KY police who entered the home of Breonna Taylor were just as inept as the police in Aurora, CO. The Louisville police claim that they entered Breonna’s home in search of her ex-boyfriend, who had already been detained earlier that day! They failed to review their database to determine whether the suspect had been detained or not before entering Breonna’s home and murdering her. Just like these police failed to verify the state of the license plate number that they were looking for and the make/model of the vehicle.

The police just sloppily accost, arrest and murder Black people and when they are exposed all they give is an insincere apology at best. But most times (like in the case of Breonna Taylor) they fail to even apologize.