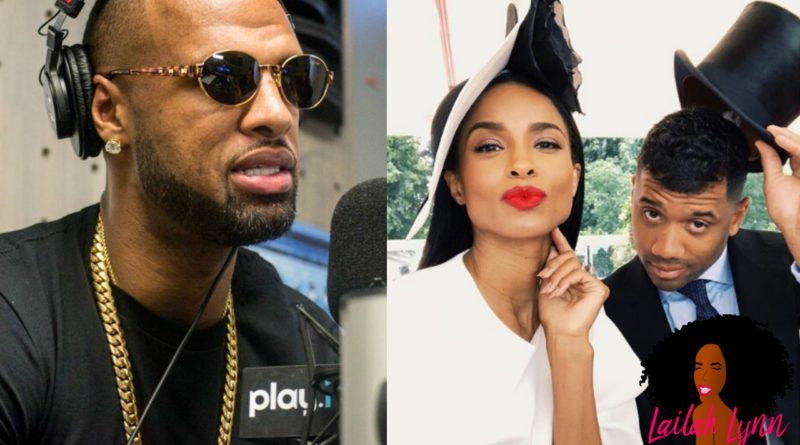 In case you missed it, yesterday Slim Thug got on his Instagram to apologize to Ciara and Russell Wilson for saying that their relationship was “not real”.  (Forget the marriage and the two kids that they’re raising, that are very real!)

Slim Thug was asked in a radio station interview if he felt that a woman that initially was attracted to “bad boys” could truly fall for a clean cut guy.  And he chose to use Ciara and Russell Wilson as an example to say that a woman that was attracted to “bad boys” could marry a clean cut guy, but it would be more for financial and family stability, because in her heart she would still like bad boys.

Slim Thug got a lot of push back after making those comments and that part of his interview actually went viral.  So today he decided to issue an apology.

What y’all think? I did sound like I was hating on those clips 🤷🏿‍♂️

I think Slim Thug is actually speaking from his own experiences when he says that he believes a woman that likes street dudes, like himself, would only marry a clean cut guy for stability.  Because if you recall – Slim Thug used to date Letoya Luckett from Destiny’s Child back in the day. They broke up when he cheated on her and had a baby.  And now, years later, she’s married to a clean cut guy – Tommicus Walker – and she has “leveled up” just like Ciara.

So I think him hating on Ciara was a little misplaced.  And he was probably really reflecting on his own life and relationships.

But what do you think? Do you think a woman that was/is attracted to “bad boys” or street dudes could ever truly fall in love with a clean cut guy?  Or would she always still love bad boys in her heart? Leave a comment and let me know what you think!