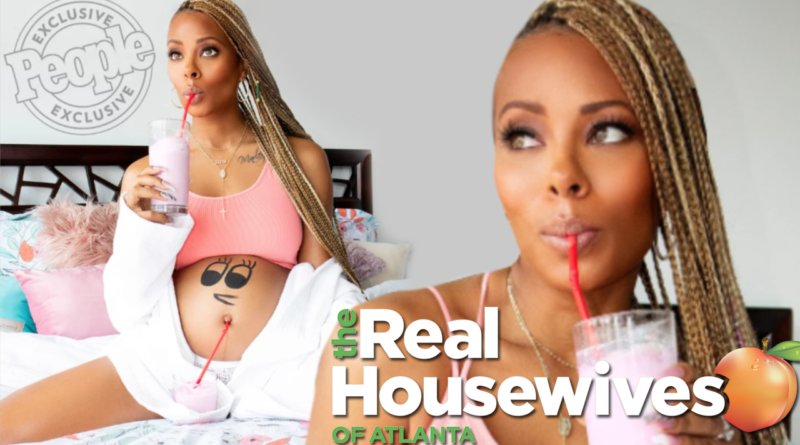 Pop Culture Real Housewives of Atlanta Season 12
May 1, 2019May 1, 2019 lailahlynn 0 Comments
Share this article to start a conversation!

Congratulations are in order for Eva Marcille and her husband Michael Sterling as they have just announced via People magazine that they are expecting baby #3!

In an exclusive interview Eva revealed that she is 17 weeks pregnant with her third child. Her first child being Marley Rae, with singer/songwriter Kevin McCall. And her second child being Michael Sterling Jr.

Eva told the magazine, “Michael and I couldn’t be more excited to announce baby No. 3 is on board!”

Eva, who is 34, reveals her happy news alongside a pair of cute maternity photos, showing her taking a drink from a smoothie glass in bed while her bare belly — complete with a drawn-on face — “sips” from its own straw, using her belly button as its mouth.

SN: I really wish I had thought to take these kinds of pictures when I was pregnant!

Anyway, being that Eva is 17 weeks pregnant, possibly 18 weeks pregnant by now, that means that Eva was actually pregnant at the Real Housewives of Atlanta Season 11 reunion, which was filmed in March. If my calculations are correct she was likely rounding out her first trimester when she filmed the reunion which is probably why she wasn’t quite showing yet.

And that means that this was the second RHOA reunion in a row where Eva was pregnant. Remember when Eva was a friend to the show on Season 10 and she came on for a few portions of the reunion, she was pregnant then and about to pop. And here she is pregnant again.

Eva’s baby news comes on the heels of the news that the Real Housewives of Atlanta is gearing up to film again this month! Today is the first day of May and the Real Housewives of Atlanta Season 12 is scheduled to shoot this month according to the tea on Tamara Tattles! The show is allegedly scheduled to shoot between May through September or October of this year.

I know RHOA just went off the air last month, and Porsha’s baby special is actually still airing. But the big wigs over at Bravo are already gearing up to shoot Season 12 and now that Eva has revealed her pregnancy the timing all makes sense. If Eva is 17 or 18 weeks pregnant now, then her due date is likely some time around the beginning of October. So it looks like the Real Housewives Season 12 has been scheduled so that Eva’s baby delivery will be a part of either the finale, or the reunion. Just like Season 11’s finale ended with Eva’s wedding, Season 12’s finale might end with her baby deliver. And if it’s not a part of the finale, then it may be a part of the Season 12 reunion, making it Eva’s THIRD pregnant reunion.

Leave a comment and let me know what you think about Eva being pregnant with her third child! Are you happy for her or do you think she’s having her kids too close together?

And if you want ALL the tea on Real Housewives of Atlanta, including the tea on Porsha Williams fiance Dennis McKinley, make sure you download the Ask Herbie app and get the tea on Dennis’ alleged addiction.