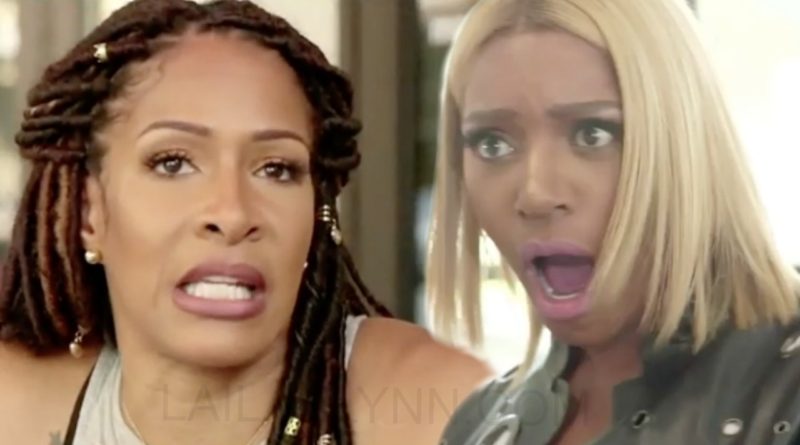 The trailer for Season 10 of Real Housewives of Atlanta has been released and it looks like this season is going to be a good one! The ladies friendships have been re-aligned and it looks like Nene is actually taking the side of Kandi, for once, as she almost comes to blows with Porsha who is now buddy-buddy with Kim.

And the ladies relationships are also being exposed as Kenya’s quickie wedding to Marc Daly is being scrutinized by the other ladies.  And Sheree’s relationship with her prison boyfriend is actually becoming a part of the show.

I’ve done several videos on Sheree and her prison bae over the past few months but I’m actually really surprised to see her relationship with him portrayed on the show.  I received an email from an anonymous source a few weeks ago that claimed Bravo was refusing to show Sheree’s real relationship on the show because it would turn off viewers.  And instead wanted to show Sheree reconciling and co-parenting with Bob Whitfield, despite him abusing her in their past.

This email came from the same source that sent me the ORIGINAL pictures of Sheree and her boo Tyrone Gilliams in prison without the watermark.  So I’m sure they are a pretty reliable source.  Here’s what they had to say about Bravo not wanting to show Sheree’s prison bae on the show.  Keep in mind this was sent to me a few weeks ago, so it seems Bravo has had a change of heart and decided to show Sheree’s real life on the show, instead of the storyline they were crafting for her.

The story line for up & coming season has been #Trumped by Bravo #RHOA threatening to cease and desist any journalist brave enough to cover the story regarding Sheree’ and her love interest who is currently incarcerated. It is also the cause of a recent firing of a line producer who is thought to be the mole leaking information within the network.

Once the “Love Connection” story broke between Tyrone & Sheree’, the story destroyed Bravo’s #RHOA storyline. Sheree’s “real story” having a man in prison doesn’t fit their #RHOA Brand which is the real reason they fired Phaedra. Phaedra initially wanted to support Apollo until the network turned her against him by suggesting that Apollo may ruin her image. Although Phaedra sold Apollo out from the fear of losing her job, she ultimately still was fired from the show for an apparent sex rumor/scandal. Now Sheree’ finds herself in a similar situation because she no longer wants to pretend the scripted role of being in a relationship with her Ex-husband (Bob Whitfield)- who had been abusive in the past and hasn’t supported his kids over the last few years.  The fact is, Bravo #RHOA has been discriminating against women being supportive of their significant other in prison. Because of this Sheree’ is afraid that her job may be next. The U.S D.O.J statistics show there are a total of 1,561,525 State & Federal inmates currently incarcerated. Black men and women are the leading race populating the America prison system. Unfortunately, these statistics negatively impact black families #blacklivesmatter which is obviously not good for the Bravo #RHOA Brand.

Bravo #RHOA would rather promote a lie to protect their Brand instead of delivering a real story that reflects real people. Bravo has a history of forcing black producers out of the network under the gag order. This is a common practice used by Bravo after stealing whatever idea or creative vision the producer brings to the table. According to our sources, Carlos King’s services “were no longer needed”, causing him to leave behind creative ideas and relocate in the hopes of redeveloping his vision. #RHOA has even gone to the extent of recently firing another producer who told Sheree’ that Bob was going to be in multiple scenes her without their permission. They wanted Bob to appear at her house unannounced to show co-parenting which has never been the case since the separation/divorce. Bravo #RHOA wants to show reconciliation between Sheree & Bob because it’s an easier pitch than to pitch her love for a man in prison.

It seems Bravo was forced to show Sheree’s real life love interest on the show due to the info leaked to the blogs about her and Tyrone Gilliams.  And personally, I’d much rather see Sheree’s real relationship with Tyrone than watch her fake one again with Bob.