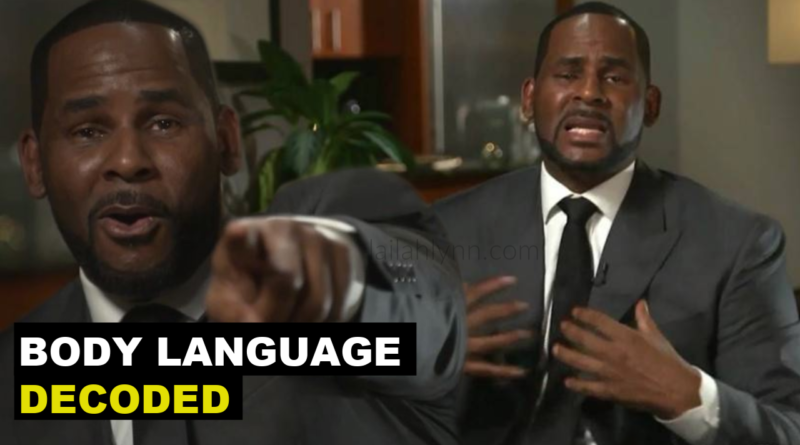 In what turned out to be an explosive interview, Gayle King sat down with R & B singer R. Kelly to discuss the charges of sexual abuse that have followed him throughout his career starting in the 90s up until today. I’m going to be breaking down the body language displayed by both R Kelly and Gayle in the interview since body language can sometimes tell us more than what a person actually says out of their mouth. According to experts, body language makes up a huge part of communication. From our facial expressions to our body movements, the things we don’t say can still convey volumes of information. And body language analysis can be used to detect when someone appears to be telling the truth and when they appear to be deceptive.

I’m not an expertly training body language analyst. But I have been studying body language on my own for years as a hobbyist because I’m very interested in the way people communicate both verbally and non-verbally especially when those people are in the public eye. So let’s get started.

In the first 20 seconds of the interview, the body language of R. Kelly is very telling. He is seated facing Gayle King head on, face to face with no barrier in between them. But although his body is facing Gayle and she is looking directly at him, when he begins to speak to her he actually darts his eyes away several time. Let’s look again at R. Kelly’s eyes when he speaks to Gayle. … Darting eyes always mean the person feels insecure. They often are looking for escape routes from talking to you. So from the very start of the interview R. Kelly’s eye movements indicate that he is actually very insecure with Gayle and that he is looking for a way out of the conversation. We’ll see later in the interview that R. Kelly does actually find a way out of conversing with Gayle. So let’s continue.

R. Kelly lists the accusations against him in a way that is meant to express absurdity. He laughs while naming some of the allegations against him as if they are ridiculous. And he continues to dart his eyes away from Gayle which indicates he is still uncomfortable with the conversation with her. However, he does look her straight in the eyes at one point when he says that the girls living in his house don’t need to be rescued. This indicates that he believes that the girls with him, although he said they’re not even there – which we already know is a lie – this indicates that he does not believe that the girls need to be rescued. It’s one of the few moments when he looks Gayle straight in the eye and it appeared to indicate that he was saying what he believed to be true. Let’s continue.

Here R. Kelly indicates that he has done women wrong in his past. And his furrowed brow and him looking directly into Gayle’s eyes reveal that he desperately wants her to believe him. He’s painting a picture for Gayle and he is using his arm movements to separate the charges he is accused of from what he has actually done in his past. You’ll notice that up until now he has looked to his left when he has recalled information about the allegations against him. But now he uses his arms to direct Gayle to his right to indicate that what he has done is totally opposite of what he’s being accused of. He desperately wants Gail to believe that what he has done is totally different from what he is being accused of. Let’s continue.

In this clip R. Kelly is looking Gayle in her eyes when he tells her that he felt the documentary was not balanced because it only focused on the negative things about him. He appears to be speaking honestly because he is looking Gayle directly in her eyes. But you’ll notice when Gayle directly questions him and asks if everything that was said about him was a lie, he says that they are lying (which is negative) but he shakes his head up and down in the affirmative. This is called incongruence. He is expressing a negative response verbally, but physically he is responding in the affirmative. This is a big indicator of deception and it is most commonly seen when someone is basically a bad actor. Let’s continue.

However, you may also notice that R. Kellys lips are pursed very tightly as Gayle is speaking about the allegations against him. Pursed lips indicate that a person is purposefully withholding information. They are keeping a tight look on what they are willing to share. And so we can tell from R. Kelly’s pursed lips that he is not willing to share all of the truth of the situation. Let’s continue.

In this clip R. Kelly begins to become very agitated. This is where his agitation really becomes evident. He is pointing his finger at Gayle while expressing himself. And he points at her several times. Pointing a finger at a person while speaking is an authoritative gesture. People do this when imposing themselves: parents do it to their children, teachers to unruly students. It’s a way of talking down, usually interpreted as aggressive and angry. When done to a peer, it’s a show of arrogance – it’s confrontational, invasive and offensive. So R. Kelly pointing directly at Gayle at the start of his explanation and several times during his explanation indicates that he was trying to get authority over her. It indicates that he felt that he was not in a position of control and wanted to regain control of the situation by showing dominance over her.

I do have to say that it did not seem to work, as we’ll see throughout the interview. Gayle was not responsive to R. Kelly’s aggressive behavior and you can tell that from her body language which never actually changed during the interview. She started the interview with her legs crossed and her body facing him, and she continued to maintain that same position throughout the entire interview.

Here we see R. Kelly point his finger at Gayle again when she responds that it’s hard for her to believe that R. Kelly has never been intimate with a woman under the age of 17. Gayle is being honest about her beliefs and looking R. Kelly directly in his face and is challenging him. And his response, again, is to start pointing his finger at Gayle as if he is a parent reprimanding a child.

In response to his aggression, Gayle leans in closer to R. Kelly putting her face closer to his face. This indicates that she does not feel threatened by R. Kelly. She is willing to get closer to him and even raise her voice over his because she is not accepting the position of dominance that he has tried to take in the interview. Although R. Kelly has pointed his finger at her several times and been visibly aggressive, Gayle is not showing any signs of backing down from him. Let’s continue.

Here is another example of incongruence on the part of R. Kelly. When Gayle asks him if all of the women are lying on him he responds in the affirmative by saying “absolutely” but he shakes his head in the negative. There is incongruence between what he is saying verbally and his non-verbal communication. This incongruence indicates deception.

Here is where things are starting to hit the fan. R. Kelly is very animated in explaining how “stupid” it would be to believe that he holds women hostage. He is using his hands and arms in a very aggressive manner while he is speaking. And he even pounds his fist into his hand at one point. Fist pounding is a very obvious sign of aggression. R. Kelly has demonstrated in this interview that he becomes aggressive when he is not in control. And the fist pounding is where his aggression level is starting to rise. But instead of directing his aggression to Gayle, he re-directs it to the camera.

Here R. Kelly’s aggression has become obvious. He is standing up, screaming, and pounding on his chest. He is trying desperately to convince the world that he is not guilty of the charges against him. And he is playing the victim, which is why you see him begin to tear up and his voice cracks. This is another example of incongruence, however, because although his words indicate that he is a victim of society, the fact that he is standing up, yelling, and beating on his chest indicate that he is a not a victim but an aggressor. This incongruence reveals that R. Kelly is acting and that he is a bad actor.

As R. Kelly begins to calm down he continues to talk directly to the camera instead of to Gayle. Again, this is because he is not comfortable speaking to Gayle. He still wants to escape the conversation with her and instead say what he wants to say directly to the camera. And you can see if even turns his head away from Gayle very sharply as if he is ignoring her. He only glances back at Gayle when she asks him what kind of help he needs. This indicates that he is receptive to being viewed as a victim. It’s very important to note that R. Kelly ranted and raved at the camera for several minutes, who knows how long, but he only returned to looking Gayle in her eyes when she, for a moment, played in to his attempt to look like a victim.

Then when Gayle outright tells him that he is playing the victim, you can see R. Kelly’s head fall into his hand. Letting your head fall into your hands is a sign of defeat. When Gayle pulls his card and outright tells him it is obvious that he is playing the victim, R. Kelly’s body language indicates that he feels defeated. His aggression did not work, and his attempt to play the victim did not work, and now we can see that R. Kelly feels defeated.

Next R. Kelly begins to defend himself and says that he’s just telling the truth. But again, while his words say that he is being truthful, which is affirmative, his body language is portraying negativity. He is shaking his head no, while speaking of being truthful. This is another example of incongruence, because his body language does not match what is coming out of his mouth, and this is another indicator of deception. It appears that R. Kelly is being deceptive when he says that he is telling the truth. And it’s a very obvious deception.

Throughout this entire interview R. Kelly’s body language has been very easy to read. His eyes indicated from the start that he did not want to speak to Gayle. He was very aggressive during the interview and even directed his aggression at Gayle at times. But when his attempts to intimidate Gayle did not work, he gave up on speaking to her.