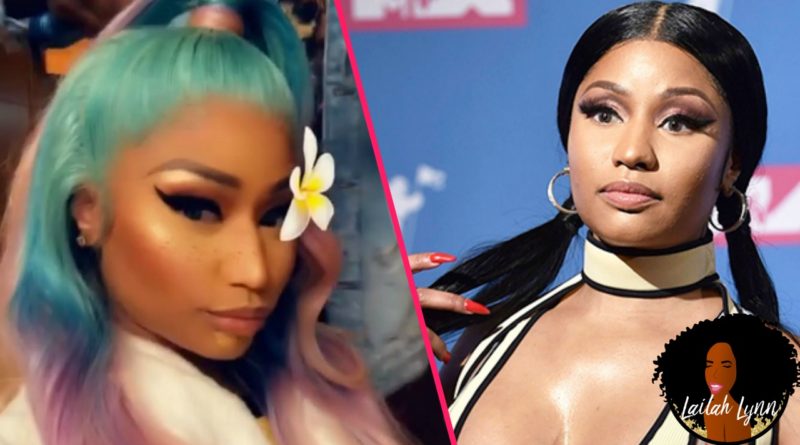 Nicki Minaj has reportedly fired her glam squad – most notably legendary celebrity hair stylist Kim Kimble – after being dragged for her VMA pigtails.

It all started when Tokyo Stylez, who had done Nicki Minaj’s hair in the past, responded to someone hating on the hair he did for Cardi B at the VMAs.

Tokyo posted this video of Cardi B backstage at the VMAs along with a caption crediting the entire glam team that put together her look.

And in the comments someone posted that the hair was “ugly ass tf”.  And Tokyo responded “let me guess, u thought those thin ass ponytails was cute” referring to Nicki Minaj’s VMA hair and assuming that if this person came all the way over to his page to hate on Cardi B’s hair, then they must be a fan of Nicki Minaj. 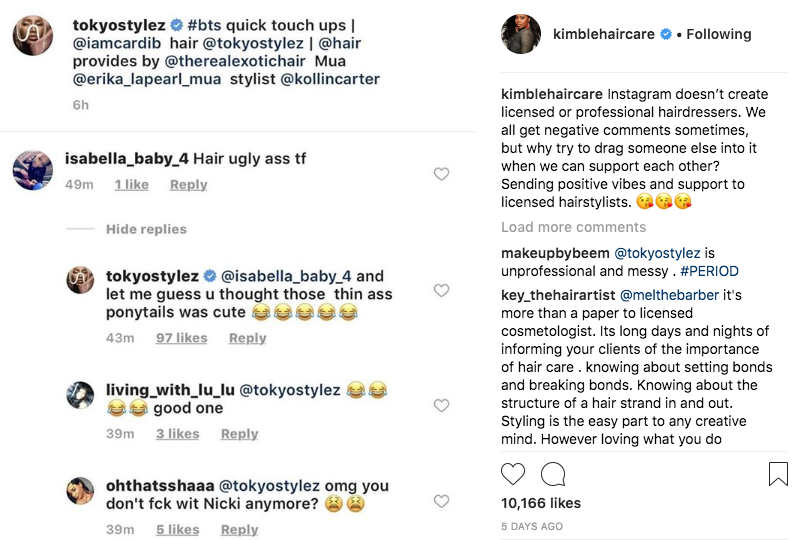 Kim Kimble, who did Nicki Minjaj’s hair for the VMA then screen-shotted the conversation that Tokyo was having in his comments and posted it on her page.  Now, I was surprised to see Kim Kimble do this because I thought she was above all the drama.  But she’s an artist and she’s sensitive about her ish! So she posted the conversation and said:

Instagram doesn’t create licensed or professional hairdressers. We all get negative comments sometimes, but why try to drag someone else into it when we can support each other? Sending positive vibes and support to licensed hairstylists.

I have a lot of respect for Kim Kimble and what she’s accomplished.  But I don’t think it’s positive vibes when you’re over in someone else comments screen shotting what they said on their page.

But anyway, just two days after Kim posted that, Nicki was on Instagram looking for new stylists!

Nicki revealed that she has found a new hairstylist, Arrogant Tae. And YouTuber Aaliyah Jay has been doing her makeup.

Colorful Hair Don’t Care 🎀 Thank you for making my #BarbieDreams come true lil baby @arrogant_tae123 Welcome him to the Kingdom y’all ☺️🦄 @aaliyahjay miss baby, you skilled Barbie’s face. Love you. Don’t give away the surprise tho. ♥️😘

READ  Safaree Reveals Nicki Minaj SLICED HIM & He Had To Pretend It Was Self-Inflicted To Protect Her!
Powered by Inline Related Posts

God is so good , god I thank you every single day cause u never let me down!!!!! I prayed n I prayed n I continue to pray for moments like this!! You just really changed my whole life! I been wanting this for years n it might took a while bt im living my dreams literally 😢🙏🏾🙌🏽🙌🏽 I let my cockiness show through my work cause it’s my passion bt im the most humble human being because I’m so blessed man!! I use to sit n dream all this n it’s happening!!! A real legend!!!! I will never forget this at all!!!💞💞💞💞💞 my favorite person in the world since day fucking one!! If anybody knows me knows I always say “I WANNA SLAY NICKI, I WANNA BE NICKI HAIR STYLIST” n now look 🙏🏾🙌🏽🙌🏽🙌🏽

And a lot of Nicki’s fans seemed to be excited that Nicki got rid of Kim Kimble. 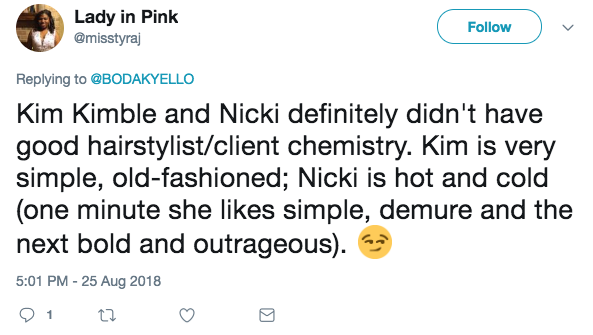 I agree with the last tweet. I’ve had to switch hair stylists too when they thought I was coming in wanting one thing, and couldn’t deliver when I wanted to do something totally different.  And I can see why Nicki switched up her stylist after that VMA look.  To me, long low pigtails are not for grown women.

But that’s just my opinion.

What do you think about Nicki switching up her hair stylist? Are you glad she found someone new? Or did you like her VMA look?