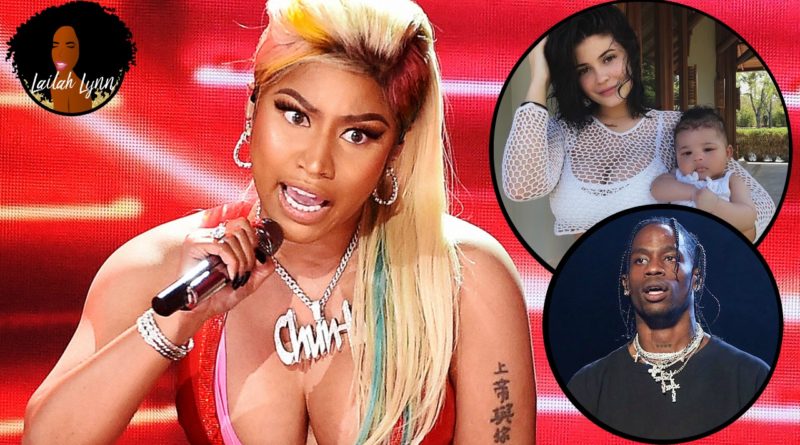 It has been a tough day for Nicki Minaj.  People are accusing her of having a “meltdown” on Twitter when it was revealed that her “Queen” album charted at #2 and not #1 as expected.

Nicki explains how Kylie Jenner, Travis Scott and even Spotify caused her album to not perform as she expected.  But first let’s clarify that she claims she is not having a meltdown, she is just on Twitter speaking her mind.

After going off about her album landing at #2, Nicki tweeted:

People are calling me thinking I’m huffing & puffing. Omg y’all this is sarcasm/dry humor. Yikes. I’m having the most iconNIC time. Come let me kiss you. 😩😘😘😘 Who’s coming to the secret show? When people call me & hear me crackin up laughing they seem so puzzled. Loosen up 😅

Alright, so to explain how her album was outsold by Travis Scott’s “Astroworld” Nicki posted a picture of an “Astroworld” tour pass that Kylie Jenner had posted to Instagram for her 113 million fans to buy, saying that her and Baby Stormi were ready for the Travis Scott tour.

me and storm ready for tour 🎪♥️ shop.travisscott.com

Travis sold over 50K of these. With no requirement of redeeming the album! With no dates for a tour, etc. I spoke to him. He knows he doesn’t have the #1 album this week. I love my fans for the #1 album in AMERICA! I’ll explain on #QueenRadio 4 albums in, #1 in 86 countries ♥️ pic.twitter.com/CiYEuczgm3

My first album sold 400K. No one is doing that with debut albums now. So I’m so grateful. I lost out on 12 hours of sales and did 200K in one week after I was supposedly cancelled. I bit my tongue last #QueenRadio but I won’t On Tuesday. I love you guys so much

The 12 hours of sales she is referring to is the sales she lost by not dropping Queen right at midnight on Thursday night.

Then Nicki mentioned how Travis Scott  boosted his sales by including ASTROWORLD in tour and merchandise bundles.

I looked at the numbers the Carters, Kanye, Nas, etc recently did. Travis sold 200K in his first week of clothes alone. I spoke to him last night & he said he’s been selling clothes b4 the music. Billboard says they’ll change the rules cuz of this, so it should be changed now!

I put my blood sweat & tears in writing a dope album only for Travis Scott to have Kylie Jenner post a tour pass telling ppl to come see her & Stormi. lol. Im actually laughing. #Queen broke the record of being number 1 in 86 countries. Thank Jesus & thank you to my fans.

Nicki also explained how Spotify decided to “teach her a lesson” for playing her album on Apple radio 10 minutes earlier than it was available on Spotify.  She said:

Spotify put drake’s face on every playlist but told me they’d have to teach me a lesson for playing my music 10 mins early on #QueenRadio. Even tho they’ve been giving away my music for free for years & I am one of the top Spotify artists of all time.

Spotify had to teach me a lesson but rewarded the man who has had an Apple radio show the longest; inadvertently helping the Apple platform the most. Oh I can’t wait for #QueenRadio on Tuesday. They took away my promotion they had promised for the 1st cpl days b/c of this. #Queen

My music went up on Apple so I played it. I assumed it was on Spotify & Tidal at the same time. Spotify said that Apple tweeted fans advising #Queen was up & therefore they had to teach me a lesson. But PRAISE BE TO GOD!!!!!!

And Nicki explained that her label didn’t want to stand up and defend her because they have other artists that Spotify might try to teach a “lesson” to too!

My label didn’t want to defend me for fear of Spotify trying to teach Ariana a “lesson” too! https://t.co/1dAdbcbWVd

So what do y’all think about Nicki Minaj’s point that artists are using all kinds of tricks – like babies, billionaire girlfriends, and merchandise to boost their album sales? Does she have a valid point? Or should she start pulling tricks out of her bag to beat the system too?