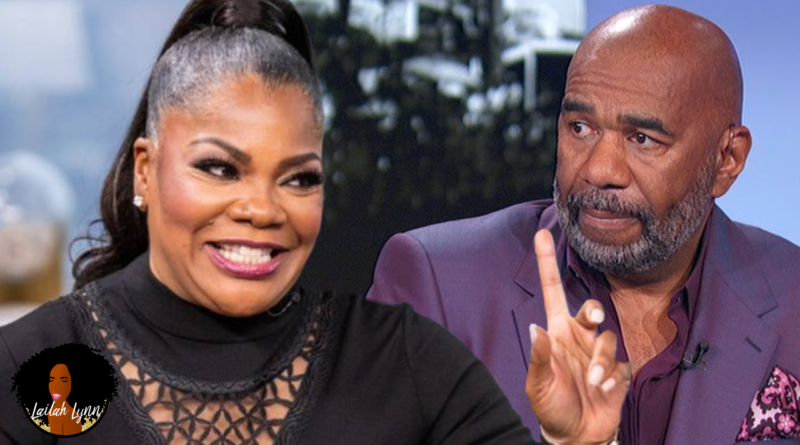 Sources claim that this week, comedian/actress MoNique and Steve Harvey sparred in a fiery argument. They were told that Mo’Nique was on the show to promote her Las Vegas residency show. Allegedly, things got so heated that she threatened to get physical with Steve.

They were told that the disagreement was sparked while the pair were discussing Mo’Nique’s controversial comments about Whoopi Goldberg, Tyler Perry and others.

As previously reported, Mo’Nique recently referred to Whoopi in an interview as ‘the help’. Allegedly, Steve told Mo’Nique that she needed to apologize to Whoopi and others that she publicly slammed. Sources tell the Jasmine Brand:

“Steve said she needs to apologize.”

“She threatened to hit Steve in the face. He told her if she hit him, her husband would have to come out and square off.”

It has not been reported yet if that part of the episode will actually air. IMO, I think Steve Harvey will definitely make sure it airs just for the ratings!

Since that initial report I have been seeing headlines everywhere about Mo’Nique threatening to slap Steve Harvey. And people have been tagging Mo’Nique on social media asking her if the rumors are true. Mo’Nique took the time today to respond to some of her fans that asked her about the rumor on social media.

Now if Mo’Nique and Steve Harvey really consider themselves brother and sister then I can understand the context of their conversation because I’ve threatened to slap by brother before when I was a child. I don’t think I ever have as an adult. But I feel like this conversation that Mo’Nique and Steve Harvey had that is being reported as being “heated” and “fiery” was really just jokes. Comedians say crazy stuff all the time, I, personally don’t think Mo’Nique ever intended to physically slap Steve Harvey. She don’t want it with Marjorie!!