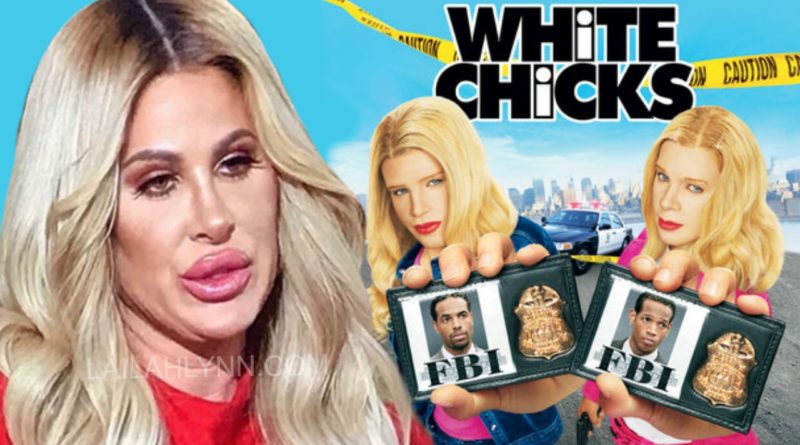 I think it’s safe to say that Marlon Wayans is NOT a fan of Kim Zolciak-Biermann.  He posted this pic of her on Instagram early this morning with the caption “no we are not in production for White Chicks 2. [WTF]?!”

I can’t believe Marlon Wayans had the cajones to actually post Kim’s picture on HIS instagram just to make fun of her lips, but then again, I can! lol

Of course, Kim saw the pic (I’m sure her fans were tagging her in the comments) and she commented back “Was always a super big fan of yours and my kids loved you.  This hurts but I guess it’s all for laughs.” 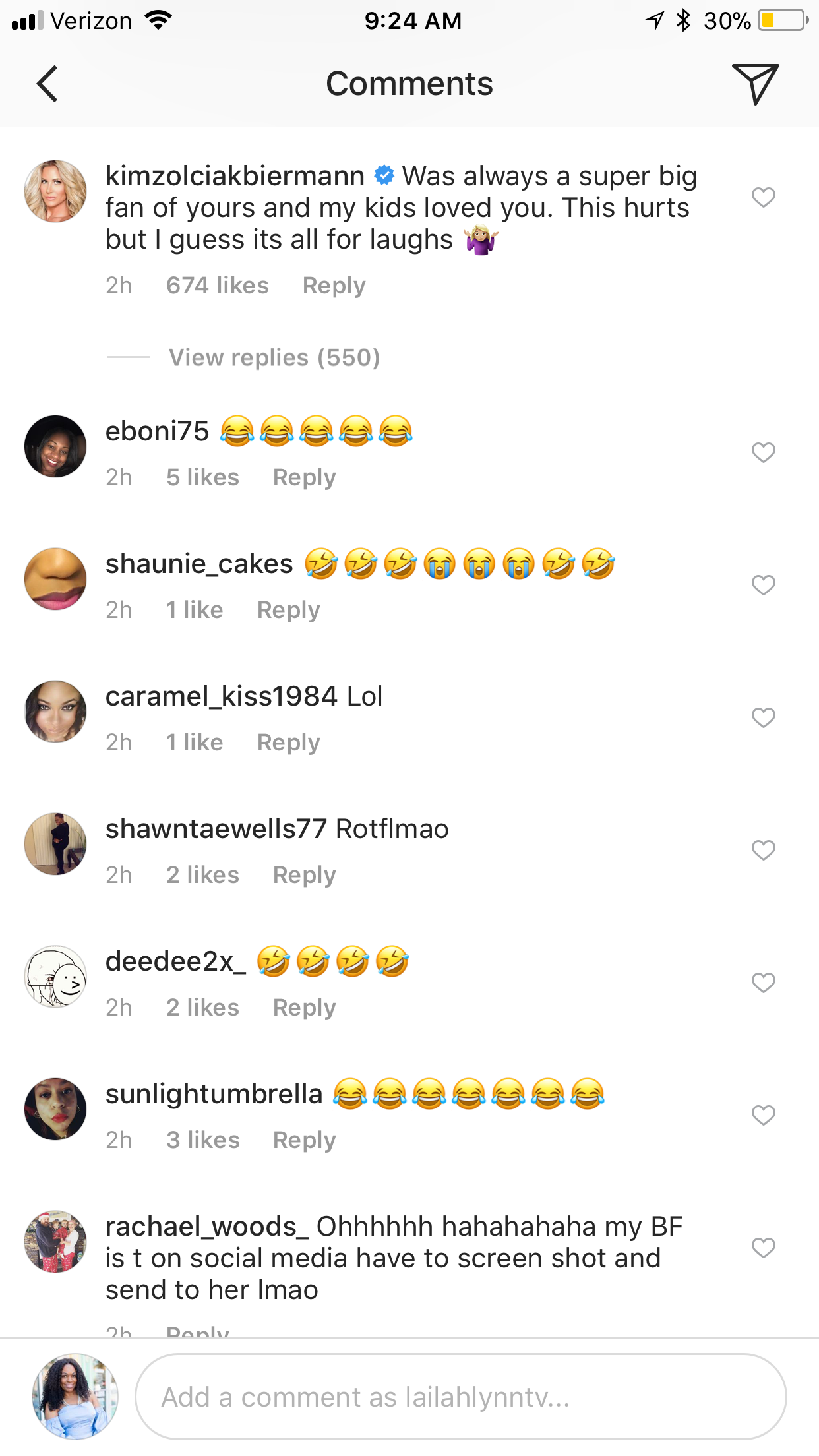 Personally, I don’t know if it’s for laughs or if it’s a serious issue that Kim tries so hard to look like the women that she acts like she hates.

She acts like she hates Nene.  But then she goes and tries to buy Nene’s lips!

And she has been back and forth with Kandi ever since she stole Kandi’s money for producing “Tardy For The Party”.  And they were still going at it last night.

I don’t like how Kim is calling Kandi “sweetie” but anyway, Kandi didn’t like how Kim was accusing her of having failed spinoff shows – so she had to pull up some facts for Miss Kim Z.  She posted a picture of an article stating that her spinoff “Kandi’s Wedding” premiered with higher ratings than any other RHOA spinoff. 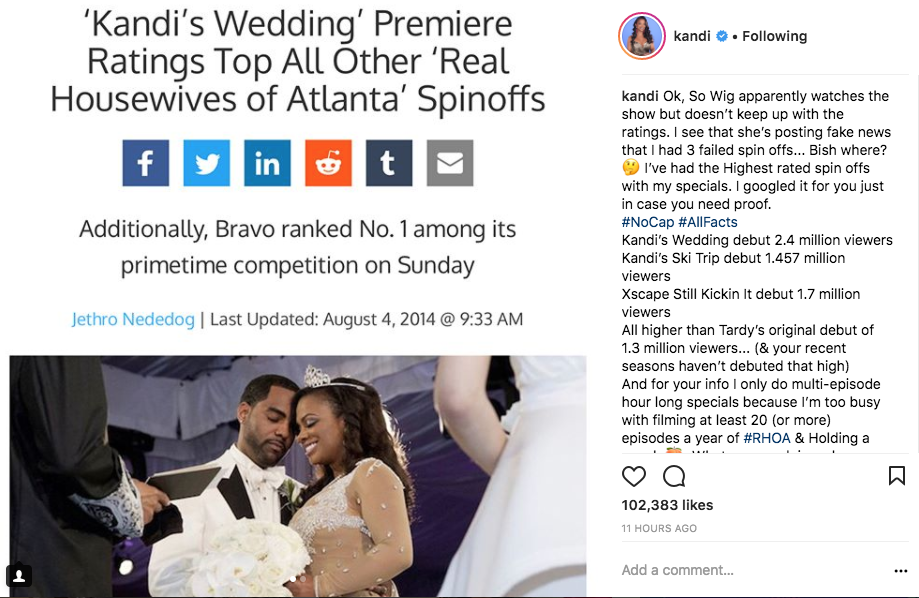 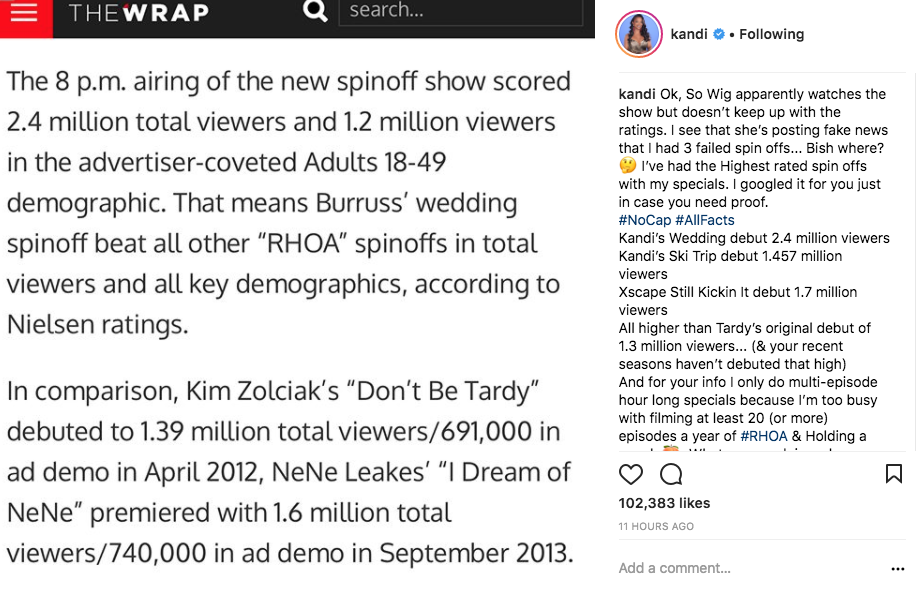 And she captioned the pic:

Ok, So Wig apparently watches the show but doesn’t keep up with the ratings. I see that she’s posting fake news that I had 3 failed spin offs… Bish where? 🤔 I’ve had the Highest rated spin offs with my specials. I googled it for you just in case you need proof.
#NoCap #AllFacts
Kandi’s Wedding debut 2.4 million viewers
Kandi’s Ski Trip debut 1.457 million viewers
Xscape Still Kickin It debut 1.7 million viewers
All higher than Tardy’s original debut of 1.3 million viewers… (& your recent seasons haven’t debuted that high)
And for your info I only do multi-episode hour long specials because I’m too busy with filming at least 20 (or more) episodes a year of #RHOA & Holding a peach 🍑. What are you doing when you’re done with your much shorter season of 30 minute episodes of Tardy? 🤔 Oh yeah, watching us! Thanks boo! No love lost! Keep being Tardy! 😘

OK!! So Kandi cleared that up!

Do y’all think it was out of line for Marlon Wayans to post Kim’s picture on his Instagram like that?  Or do you Kim deserves to be made fun of for how she treats the ladies on Real Housewives of Atlanta?