In case you missed it, Kenya Moore decided to address the rumors that she’s been demoted from a Housewife to a friend of the show on The Real Housewives of Atlanta Season 11.  She posted this throwback video on Instagram of her behind the scenes interviews on the show and captioned it:

#FAKERHOANEWS .No one has EVER asked me to be a friend to show… .fact: I am THE housewife that has had THE highest rated episodes the past 3 seasons… even last year having missed 3 episodes.🤔 .#Fact: the Barcelona Lineup didn't work… ratings slipped. The fans have spoken. I've never been called boring 💅🏾 .#Fact love me or hate me I may not be the "fan favorite" (my sister @kandi is and well deserved) but thank you for being invested in my life and continuing to contribute to the success of #RHOA and my success in my career on all levels .Don't worry #teamtwirl you will get to see #babytwirl and all that I'm experiencing as a new wife and mother-to-be one way or another .You will see my raw truth… the good the bad and the ugly one way or another ☺️ .Fact# I am good effing TV! ❤️ .Fact# I will be a HW or nothing at all. 😘 Fact# I don't discuss business but know that I know my value #queen #👸🏾 #kenyamoore #truth #shadequeen #shadeassassin #blameitonmyhormones #letaBishknow

Now, after a scorching caption like that saying more than one time that fans are going to see her one way or another – meaning she has options – of course the first question a fan asked was “so does this mean you’re not returning?” to which Kenya replied “I didn’t say that chile.”

And she didn’t say that.  What I heard her say was that she knows her worth and she’s not settling for less than she’s worth.

Nene and a lot of the other ladies also chimed in and commented on Kenya’s post.  First Nene said “You’re making me laugh out loud, chile” which is SO good for Nene considering what’s she’s being going through with Greg lately.  And then Nene commented on @therealhousewivesofatlanta fan page “Something about this just makes me go, hmmmm… Just saying @thekenyamoore.”

It seems Kenya is always strategic so I definitely get where Nene is coming from.  And I do think this post was doing more than just setting the record straight about not being a friend to the show.  I think Kenya is really trying to let us know that she might be getting her own show if she’s not holding a peach on Season 11. The fact that she keeps saying that we will get to see her being a wife and mother one way or another, let’s me know that she likely has other show offers on the table that she might just take if Bravo doesn’t give her a peach and her coins.

READ  UPDATE!Tamar Braxton FIRES Her Band After They SKIP Her Performance In Philly! [live video]
Powered by Inline Related Posts

But we’ll have to wait and see.

Kandi, Claudia, Carmon and Kenya’s best friend Brandon all left encouraging comments on Kenya’s post.  And it seems the cast of The Real Housewives of Atlanta does want her to come back. And Justin Diego from BingeworthyTV here on YouTube was also here for it!

A fan even pointed out that there are other stars on Bravo that are either married or are in relationships that don’t show their partner on TV. This person commented: 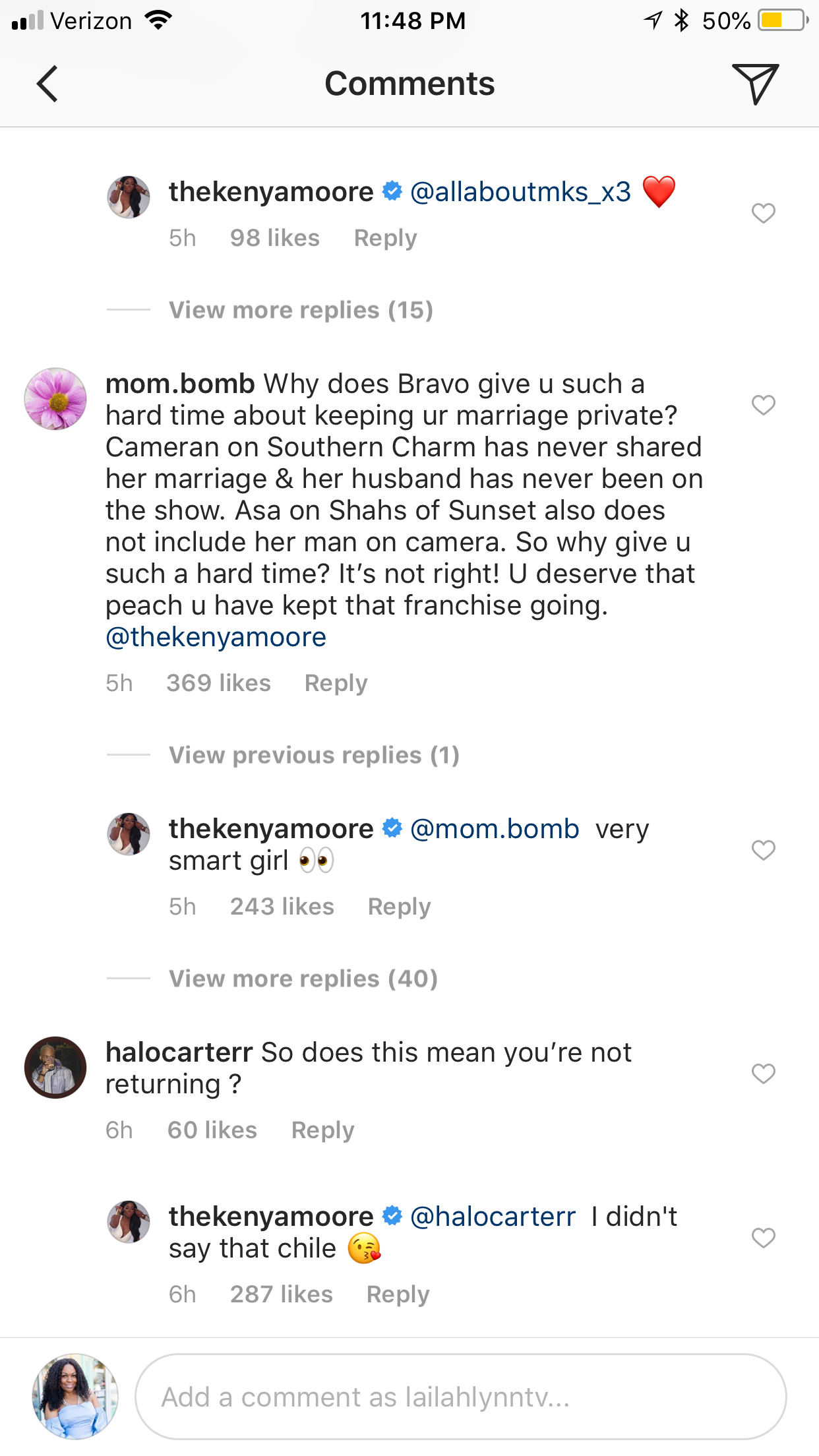 That is a good point! Asa from Shahs of Sunset, who is dating a Jackson, NEVER shows him on the show.  I think she might have shown the back of his head one time, but that’s it.

But those other shows are not Housewives shows.  The Real Housewives of Atlanta is allegedly about being a housewife, and now that Kenya is ready to show that side of her life on the show – she might not be able to!