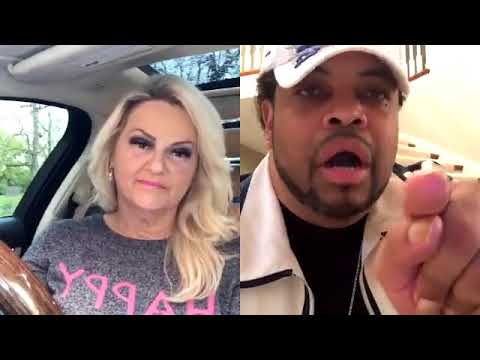 I want to preface these live videos that I’m about to share with you with an explanation of what’s really going on and the people involved in it. Recently Gospel music artist Vicki Yohe, went live from the jaguar purchased for her by Apostle David Taylor and exposed him for lying, cheating, and having a harem of women, some of whom attempted to brainwash her. Vicki Yohe is very well known in the Gospel music community and some people refer to her as a “blue eyed soul”. And she claims that her popularity in Gospel music is what drew Apostle David Taylor to her. Basically, in her own words, she’s saying that he was clout chasing when he met her. And he ended up sleeping with her and buying her extravagant gifts, like the car she is sitting in, in exchange for her presence and her promoting him to her audience. In this live video David and Vicki did together a few months ago he mentions that he wanted to promote his ministry through her.

Keep in mind, just a few years ago this same man, David Taylor, was investigated for misappropriating the church funds, which he denied. His deposition was posted to YouTube and went viral, he later claimed that he was actually testifying in the divorce hearing of couple who’s husband was upset that the wife had donated to a “Black man’s ministry” and that the video had just been editing to make it look like he was being investigated for fraud…

And if the name Apostle David Taylor still is not familiar to you, he is also the man behind Joshua Media Ministries which holds miracle crusades where people are healed of ailments, diseases, etc. And he especially focuses on helping people have a face to face encounter with Jesus.

He was also formerly married to Tabitha Taylor, who also went live on Facebook recently and exposed him for cheating on her with other women IN the church. She said she had seen signs that he used women in the church prior to their marriage and things only got worse after they exchanged vows. She explained that even though her ex-husband was having multiple affairs with the women in the ministry, she stayed because she believed that is what God wanted her to do. And she prayed for God to make her numb to the pain, instead of leaving. But eventually she did wake up to the madness and now she’s teaching other young women in church how to avoid falling into the same trap. Here is a portion of what his ex-wife had to say about him…

From the sound of it, it sounds like Vicki Yohe also fell into the trap of falling in love with the way God is using a man and not the man himself, and that’s why she made the poor decisions she made with him like letting other women in his harem brainwash her, sleeping with him, and sending him pictures of her in her birthday suit, which she reveals in this video.