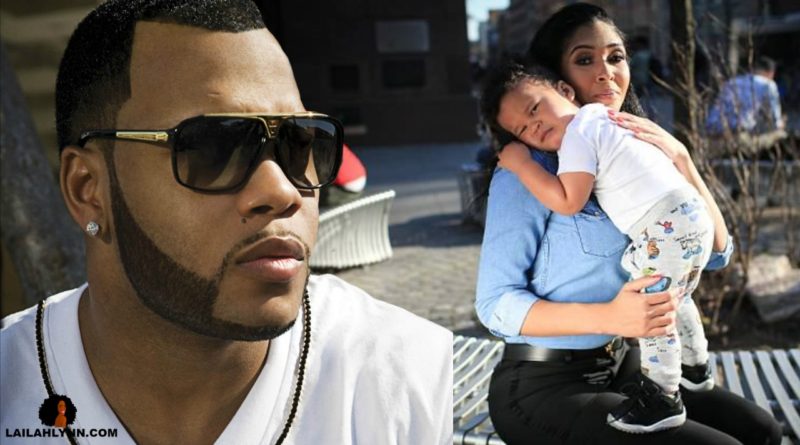 The mother of Flo Rida’s son, Alexis Adams, has revealed the rapper refuses to meet his toddler, who suffers from a rare brain disorder, and has called him an ‘evil f**king child’.

Alexis met Flo Rida, who is worth an estimated $30 million, in 2015 on the West Coast but would not disclose the details of their meeting. ‘We were friends at first, very casual,’ she recalled. ‘He traveled a lot and I was on the West Coast, he lived on the East Coast. ‘We were getting to know each other. That’s how our relationship was in the beginning.

‘We became romantically involved at the end of the year. We were just dating, it wasn’t exclusive, not at that time, but we did do intimate things together. ‘It went on until I discovered I was pregnant in 2016.’

Alexis, claims that when she told Flo Rida about her pregnancy, he put pressure on her to have an abortion and sent vile insults about her unborn child.

She said ‘It caught me off-guard. I was pregnant and hormonal – one minute happy, then sad. You want support. You don’t know what to think when you’re pregnant and someone’s like that.’

Alexis said, ‘He called my baby “an evil f***ing child”. Those were his exact words.’

Alexis, who now lives in her hometown of New York, claims that she and Flo Rida only spoke a few times early in her pregnancy and then she lost contact with him.

Around that time, Alexis also discovered that she was having a high-risk pregnancy.

‘I was in my second trimester and I noticed the doctor looking at the sonogram differently. They noticed that the baby had water on the brain and diagnosed him with hydrocephalus,’ she said.

She described the remaining months of her pregnancy as extremely stressful.

‘When you are high-risk it’s not like a normal pregnancy,’ Alexis said. ‘They check you every two weeks, it’s a full exam on the baby and then you speak with counselors.

‘They tell you all the things that can go wrong – he might need surgery as soon as you give birth, he might need a helmet, a shunt. You really don’t know until the baby is born.’

By the time she gave birth, she was only communicating with Flo Rida through attorneys and there was no suggestion that he would be in the delivery room.

She said: ‘I didn’t think that my baby was going to make it. I tried not to get an attachment.

‘When he first came out, he didn’t cry so we were all nervous. I was losing so much blood and they took him away from me.

‘I remember a lot of doctors, lights, alarms going off. My aunts and mom were staring at me. They told me later they had never seen so much blood.

She said, ‘I lost three times the amount of blood [than normal] and suffered from a stressed hip nerve. I had to relearn how to walk. They kept me [in hospital] for eight days.’

Alexis’ lawyers advised her to let Flo Rida know that his son had been born via text message.

‘He didn’t respond,’ she said. ‘Flo Rida was aware of how high-risk my pregnancy was and he is entirely aware of Zohar’s condition. He does not want any involvement.’

Alexis also claims that none of Flo Rida’s  family  have tried to build a relationship with their nephew.

She said, ‘None of Flo Rida’s family has reached out to check on Zohar at all – not at Christmas, New Year or his birthday. No one has expressed any kind of concern. I believe they couldn’t care less.’

In an exclusive interview with DailyMail.com, Alexis Adams, 34, said that Flo Rida initially denied that 19-month-old Zohar Paxton was his son and literally turned his back on the baby when she brought him to a medical center for a paternity test.

Alexis said, ‘Flo Rida has only seen his son once – during the paternity test – but kept his shades on and his back turned. They were in the same room. He didn’t try to hug Zohar, nothing. It was very cold.’

That DNA test revealed a 99.9 percent match that Flo Rida, whose real name is Tramar Lacel Dillard, is the child’s father.

In his early months, Zohar was on government programs for his healthcare needs and Flo Rida did not provide ANY financial support.

Alexis said ‘If it was up to Flo Rida, he would allow the government to take care of his son.’

Alexis also shared: ‘I’ve had to chase Flo Rida for child support until a judgement was made.

‘He’s trying to bury me in legal fees and paperwork. To be honest, this could have been settled. My attorney reached out to them when I was pregnant.’

Although Flo Rida is now covering his son’s medical insurance and provides $5K in child support each month, Alexis’ legal battle with Flo Rida is ongoing because ‘she does not feel the support is enough for a special needs child’, according to her attorney.

Their son has hydrocephalus, a neurological condition which causes an abnormal accumulation of cerebrospinal fluid within cavities in the brain.

Although symptoms vary, they can include the abnormal enlargement of a baby’s head, nausea, vomiting, headache and vision problems. Since birth, Zohar has had numerous doctors’ appointments, tests and ultrasounds for the incurable condition.

Last month, he underwent brain surgery – but there was no visit or phone call from his father, according to Alexis.

‘Even after Zohar’s surgery, he hasn’t reached out to find out if he’s okay,’ she said. ‘I find it strange because Flo Rida is always involved in charities pertaining to kids.

According to Alexis’ attorney, Flo Rida began paying child support for his son around March 2017 – but the payments were an amount chosen by the rapper and ‘significantly less than the later provisional amount determined by the judge’ and the payments did not arrive on a consistent basis.

By the way, in 2013, model Natasha Williams sued Flo Rida for child support after a DNA test proved a 99.99 percent result that he was her son’s father.  She also alleged that Flo Rida had offered to pay for her abortion.

Do you think the mother of Flo Rida’s special needs son is being greedy by wanting more than $5K a month in child support for their son?  What do you think is an appropriate amount based on Flo Rida’s net worth of $30 million?