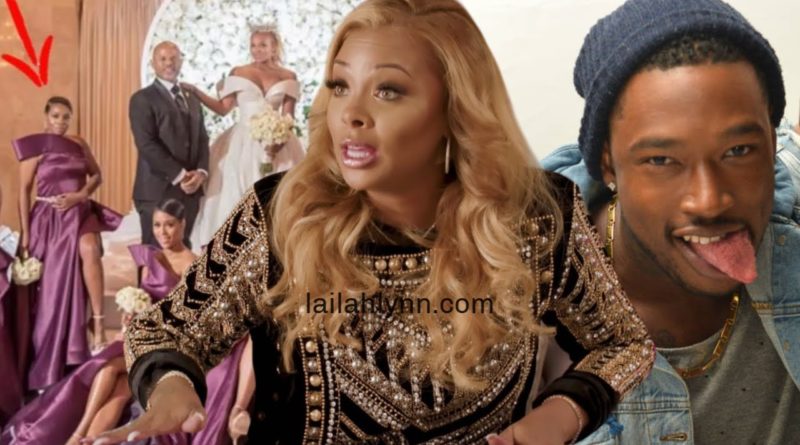 This whole story with Miss Eva Marcille has so many twists and turns its ridiculous! I almost don’t know where to start – so I’ll just start at the beginning with last night’s episode of the Real Housewives of Atlanta.

On last night’s episode, one of Eva’s bridesmaids – who she called not just a friend but a SISTER – spilled tea to Marlo (of all people) claiming that Eva and her husband are broke, renting houses, and that Eva used a whole ‘other SSN to get her car!

It makes sense that the person would call Marlo with the allegations being that Marlo is known for being messy on the show and she will carry a bone, especially if it’s about Eva.

Marlo was getting dragged on social media for being the one to carry the bone, so she got on her Instagram and explained her part in the mess:

Newbie Tanya Sam is actually the one who brought Eva the news at Kandi’s new restaurant opening. And she defending herself for bringing Eva the information as well. She said:

I can also see Marlo delivering the info to Eva in front of all the Housewives so I understand where Tanya was coming from. But at the same time, I also think she was just trying to get some extra camera time.

Eva’s bridesmaid responded to Terrell calling her out in his comments. She said:

And then the STORE where Eva got the bridesmaid dresses commented too!

Meanwhile, Eva’s ex-fiance Kevin McCall – the father to her child, whom she refers to as “donor” was on Twitter implying that the things the bridesmaid said about Eva and Michael being broke were true!

First Kevin responded to a fan who asked if Eva was making EVERYTHING up:

Then he tweeted implying that Eva’s husband, Michael Sterling is broke and can’t pay the rent!

Then Kevin responded to a fan who said that he is crazy and that it is documented. I think this fan was referring to social media receipts of Kevin McCall’s rants that “prove” he is crazy, but he responded and said:

And then he said:

If Kevin McCall really does want to see his daughter, he might want to stop referring to her mother as a “Real Hoe of Atlanta”. I’m just saying!

Leave a comment and let me know what you think about Eva’s bridesmaid putting her on blast, and Eva’s cousin turning around and putting the bridesmaid on blast.

And what do you think about Kevin McCall saying that Eva is just using him for a storyline? It’s obviously her real life, put do you think Eva is exaggerating about the situation? Leave a comment and let me know what you think!