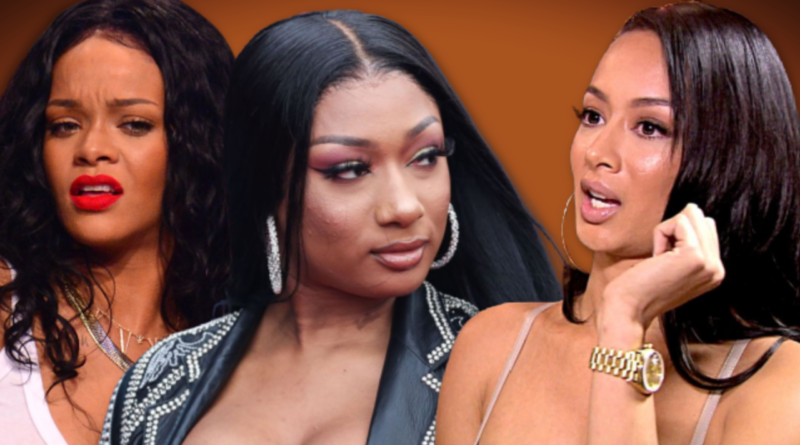 Draya Michele appeared on Van Lathan’s Wine and Weed podcast and shared that she was here for Megan Thee Stallion and Tory Lanez having their own Bobby and Whitney moment and that she wants someone to love her so much that they shoot her in the foot.

Considering that Draya Michele is a Brand Ambassador for Savage Fenty, and Rihanna was the victim of a DV situation with Chris Brown, this wasn’t very smart for Draya to say.

What she said about Tory and Meg is,

I predict that they had some sort of Bobby and Whitney love that you know, drove them down this Snapped-esque type of road. I’m here for it. I like that. I want you to like me so much you shoot me in the foot, too.

This is so problematic on so many levels. Megan Thee Stallion has already expressed that she feels traumatized by this situation.

Of course Twitter blew up in response to Draya’s insensitive comments.

And their response has people speculating that Draya is about to lose her job because Rihanna doesn’t play when it comes to glorifying DV.

Meg The Stallion also responded to Draya’s foolishness on Twitter. She said:

And Meg also addressed the adult males who have been making jokes about her getting shot. Retired rapper Cam’ron recently re-posted a meme suggesting that Meg Thee Stallion is a man

And 50 Cent also implied that Meg Thee Stallion is a man when he posted this Boyz n The Hood meme.

Meg thee Stallion responded to the men that having been making jokes about her as well. She tweeted:

And by hoe ass niggas, I’m sure she meant retired rappers 50 Cent and Cam’ron.

Meanwhile, Draya Michele has apologized twice for her ignorant comments. She tweeted:

And she posted on her IG stories:

Now, in my opinion, I think all these apologies from Draya are an attempt not to lose her job with Savage Fenty and the other woman owned and operated brands that she works with.