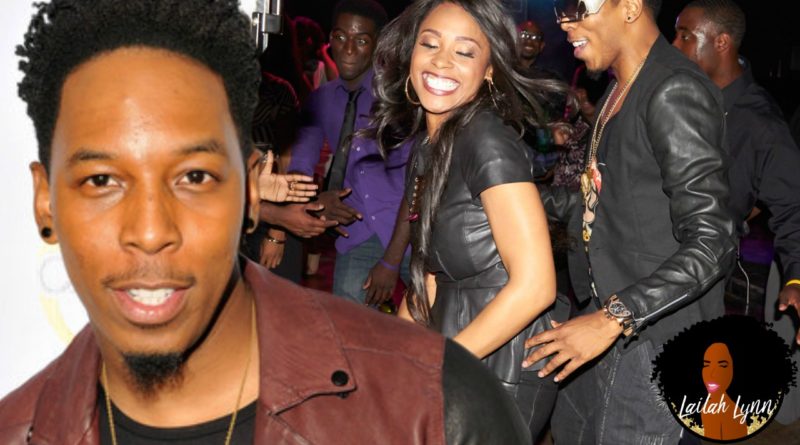 This next story some of y’all might find disturbing, and some of y’all might not.  But just a few days ago, Gospel music artist and Pastor Dietrick Haddon previewed a new song on his Facebook page that is so sexual, and so explicit, and to some people so disturbing!  Let me give you guys a preview of the lyrics in case the song audio gets blocked, then we’ll listen to the actual song.

Stars are shining bright to set the mood for you and I,

Been a good leader

Just call me Santa (I love) cause her milk & cookies Imma eat it up.

Alright so here is the song.

Leave a comment and let me know your first thoughts on hearing the song. Do you like it? Would you listen to it? What do you think of it overall?

A lot of people in Deitrick’s comments are NOT feeling the song and are dragging him for making such a sexual song when he is a PASTOR. 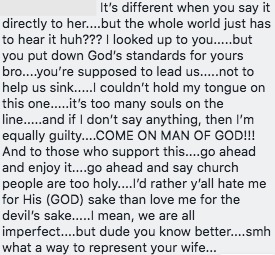 For the record, I think Dietrick and his wife agree on most things because she has backed up a lot of the controversial statements he’s made in the past about having sex outside of marriage and things like that, which I’ll get into in a second.  But I just want to share a few more of the responses to his music with y’all. 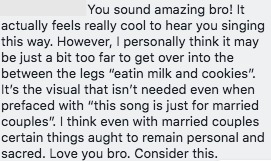 And another person said:

There were some people that actually supported Deitrick’s new song and they commented as well.  This person said:

Personally, I agree with the person who pointed out that there’s a difference between Love and Lust and that this song is specifically about Lust.  And there’s nothing wrong with lusting after your spouse, clearly! That’s how you should feel.  But your lust for them should still be between you and them, not you, them, and the world!  And when someone, like Deitrick, makes music that is so explicit talking about milk and cookies and eating it up – it’s sharing your lust with the world – which I don’t think is OK!

But Dietrick Haddon is known for being very controversial.  When he was on the reality TV series Preachers Of LA he got into it with several of the other pastors because he seemed to endorse living together before marriage.  I’ll include a clip of him defending himself in this video so you can get a feel for his point of view.

But leave me a comment and let me know what YOU think of Deitrick Haddon’s new song.  I specifically want to know if you would be OK with YOUR pastor making this kind of music? Leave a comment and vote in the poll!