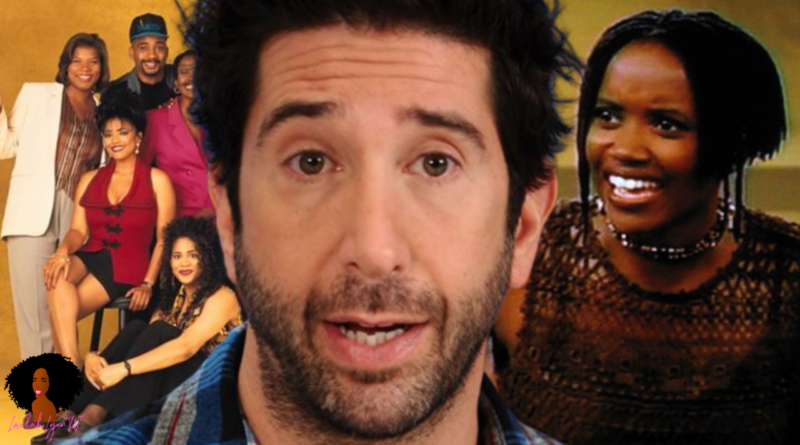 Queen Latifah, who starred in Living Single, a woman who is definitely a “credible source” explained to James Cordon on the Late Late Show in 2016 exactly how Warren Littlefield, who was president of NBC at the time, openly admitted that he wanted the show Living Single – which aired on Fox – he wanted that same show on NBC, and then the next thing she knew, Friends premiered on NBC.

“It was interesting because, when Living Single came out, shortly thereafter, Warren Littlefield, who was at NBC, they asked him if he could have any show on television — any of the news shows — which one would it be?” Latifah said. “And he said Living Single. It was in the newspaper. And then the next thing you know here comes Friends.”

In the full interview with The Guardian, the statement suggesting an all-Black re-make of Friends is crouched between David Schwimmer defending the criticism that Friends receives currently, in the new millenium, for racism, sexism, transphobia and homophobia – it’s crouched between that defense and him explaining how he is aware of his own privilege as a White male who’s parents could afford to send him to a private school.

Here is an excerpt from the interview so you can see how this interview actually started out with David Schwimmer painting himself as an ally to Black people, then took a nose-dive in to White savior mode.

Millennials watching Friends on Netflix shocked by storylines,” ran a headline in the Independent two years ago, noting criticisms of sexism, homophobia and transphobia. It cited, for example, Chandler worrying about being perceived as a gay man, Ross asking a male nanny if he is gay, and jokes about Monica’s weight.

It is the only moment of the interview where Schwimmer appears a little defensive. “I don’t care,” he says, dismissively. “The truth is also that show was groundbreaking in its time for the way in which it handled so casually sex, protected sex, gay marriage and relationships. The pilot of the show was my character’s wife left him for a woman and there was a gay wedding, of my ex and her wife, that I attended.
“I feel that a lot of the problem today in so many areas is that so little is taken in context. You have to look at it from the point of view of what the show was trying to do at the time. I’m the first person to say that maybe something was inappropriate or insensitive, but I feel like my barometer was pretty good at that time. I was already really attuned to social issues and issues of equality.”
Friends is also a product of the pre-“woke” era when it comes to race. “Maybe there should be an all-black Friends or an all-Asian Friends,” Schwimmer says. “But I was well aware of the lack of diversity and I campaigned for years to have Ross date women of colour. One of the first girlfriends I had on the show was an Asian American woman, and later I dated African American women. That was a very conscious push on my part.
Schwimmer’s social activism started with his parents. “My mom was a very vocal, groundbreaking feminist activist lawyer [and occasional actor]. So my earliest memories of theatre were watching these feminist productions that my mom was in and being on the picket line with my parents and fighting for women’s rights and gay rights.
“That’s the environment I grew up in. I’m very aware of my own privilege as a heterosexual white male whose parents were able to pay for a private education for me. I’ve always felt a sense of responsibility to give back and to call things out if I see an abuse of power.”
For more than two decades Schwimmer has worked to raise public consciousness about rape and sexual harassment. In 2018 he made a series of short videos called #ThatsHarassment and he serves on the board of directors of the Rape Foundation in Santa Monica, California.

So the fact that this story has gone viral for the opposite of what he was clearly trying accomplish is probably devastating to him and to his ego.

But to me, and a lot of Black people seeing this story unfold, the fact that David Schwimmer can’t acknowledge that the show he starred in, and still makes millions of dollars a year from in syndication, was preceded by an all-Black show, is what tells us that even though he wants to be seen as an ally, he’s actually operating out of a White savior complex.

So, like I said earlier, I would like for this video to be productive. So I’m going to give some advice to David Schwimmer and other people in his position who want to be allies but who’s egos get in the way. My advice is to educate yourself on the history and the current issues of how whatever industry you’re in treats Black people in that industry.

So the creativity of a young, intelligent Black woman is what the White male president of NBC to was trying to replicate with the show Friends.

Starting out seeking that type of knowledge and educating yourself on how your industry currently and historically treats Black people in your industry is how you can begin to be an ally to Black people without your ego taking you down the wrong road where you think you’re actually helping Black people but in reality you’re showing that you’re ignorant to the struggles that Black people go through.