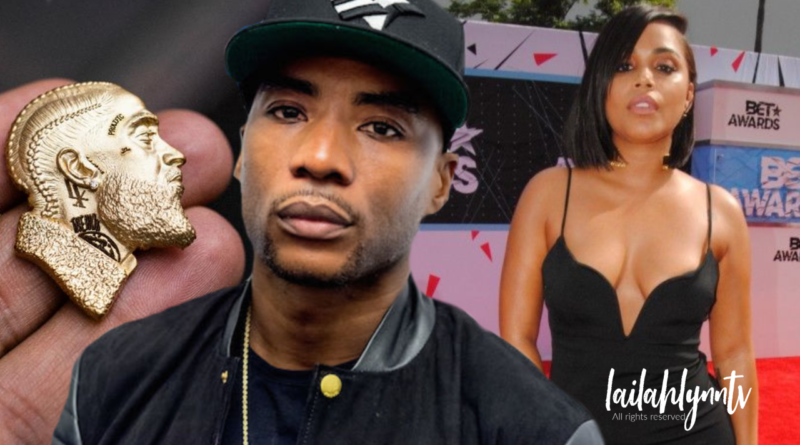 The pendant was designed by renowned jeweler Greg Yuna. And Greg Yuna is the one that has actually done interviews about the pendant from what I’ve seen online, not Charlamagne. So at this moment I can’t say that Charlamagne was trying to publicly give Lauren London this gift to get some type of clout or something like that, because it seems that Charlamagne was giving the gift privately and the jeweler who made it, is the one that wanted to do press about it and talk about exactly how he made it.

Greg Yuna told Hypebeast “I originally wanted to make a tribute piece regardless of being approached, but to make one with this purpose was even more fulfilling. I had to find the best picture of him that I thought would be most suitable and iconic. Then we make a cad and spend tedious endless hours on the computer trying to get as much detail as possible in so we can print it on a state of the art 3D printing machine. Finally, we cast it in gold and laser in the tattoos and do the finishing touches including the hand-selected full cut diamond in his ear.”

The detail in the piece is pretty intricate so I appreciate the jeweler breaking down exactly how it was made. But as far as Charlamagne is concerned, a lot of women online are commenting that it’s strange for Charlamagne to want to give Lauren London a gift like this after body shaming her a few years ago.

Back in 2015 Charlamagne was giving commentary on an awards show that Lauren London attended not long after giving birth to her son, and Charlamagne tweeted:

Personally, I think it was insensitive for Charlamagne to comment on the size or shape of anyone’s body, especially a woman that recently gave birth. So I can understand why some women online are questioning Charlamagne’s motives.

Charlamagne responded reminding Nipsey that he’s just a little kitty cat and he apologized for what he said about Lauren London and said that he didn’t know that Lauren London was Nipsey Hussle’s girlfriend.

In CTG tweet where he apologizes, he specifically states that he is taking the blame because he didn’t know that Lauren London was Nipsey Hussle’s girlfriend – as if Lauren London is not worthy of respect as a woman on her own – but when she’s connected to a man that he respects, then she becomes worthy of respect.

That sounds like a double standard to me, and that what I have a problem with. A woman should be worthy of respect regardless of whether she’s connected to a man or not. In my opinion, Charlamagne should have never body shamed Lauren London in the first place – nevermind the fact that she had just had a baby. Just as one human to another, he should have had enough respect for her not to body shame her. And Charlamagne shouldn’t have regretted body shaming her just because she Nipsey Hussle’s girlfriend. He should have had more respect for her as an individual, period. That’s my opinion!