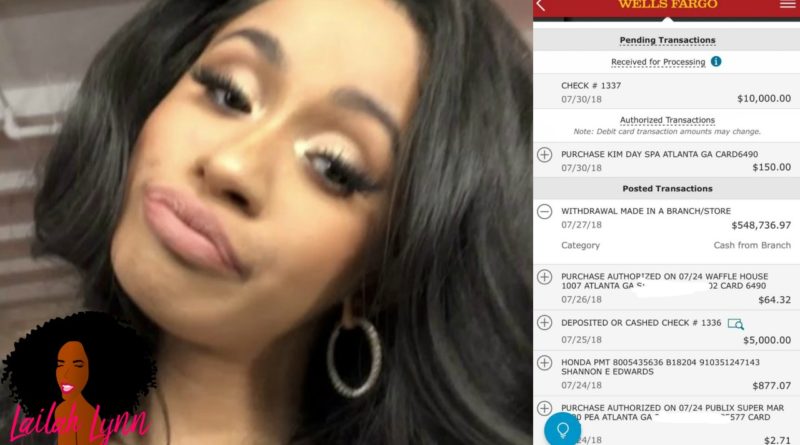 New mommy, Cardi B, recently took to social media to show off her and Offset’s new matching lamborghinis.   She captioned the picture of them sitting on their new cars:

HIS & HERS @OffsetYRN OFFICIAL LAMB OWNERS

And even though she clearly said official Lamb OWNERS (not leasers) apparently some people accused her of leasing her Lambo.

TBH, I only saw one blog accuse her of leasing her Lambo. And they actually mentioned that leasing is a better option for these types of luxury vehicles.  But apparently for Cardi, even the slightest mention of her leasing her Lambo got her upset enough to actually post the picture of her bank receipt proving that she paid for the car cash.

Now I don’t know which is worse, paying half a million dollars for a luxury car that depreciates the moment you drive it off the lot.  Or posting your bank account information online where scammers can easily guess your debit card number. 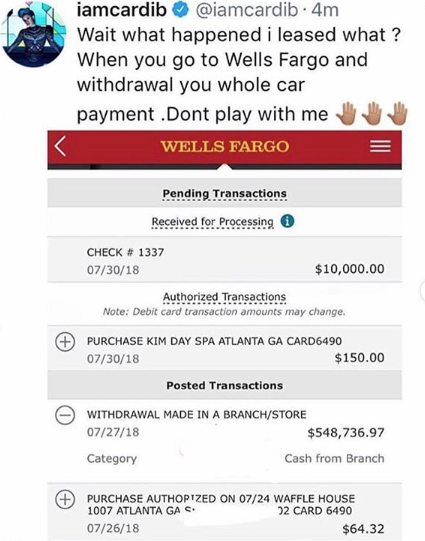 And she captioned the picture:

Wait, what happened? I leased what? When you go to Wells Fargo and withdraw your whole car payment.  Don’t play with me.

A lot of people were surprised to see Cardi B was so pressed that she actually posted her own bank records.

I don’t know why Cardi B feel the need to post receipts to prove to the poor that she’s rich. 😕

Did Cardi B really just get on IG to show her car receipts because ppl in the comments said her car was leased…..these people be rich as fuck but still caring what strangers on the internet think! That shit blows my mind lol.

Cardi B is posting all of these receipts for her Lambo and I’m like cool you spent half a million dollars on a car like you know how quick that shit depreciates??

Which is true! Cars depreciate faster than THIS! But if that’s how she wants to spend her money, that’s on her.  I’m just wondering why she is out here buying her own Lambo when she just had a baby and her husband just got out of jail.  If anything, you would think Offset would have purchased it for her, but that’s just my opinion.

I was just talking to Daytime Tea Time about this and she pointed out that Cardi B basically purchased her OWN push gift.

Cardi responded to people criticizing her for posting her bank transaction by saying:

People love doubting you then when you hit them with receipt is still a problem 🤷🏽‍♀️🤷🏽‍♀️🤷🏽‍♀️Suck my dick 😎Now goodbye !Im finna do a song to get nikkas mad 🤪🤪…Studio 🙂

What do y’all think about Cardi B posting her bank transactions to prove that she purchased her car cash?  Do you think she’s too pressed about what people think about her? Or do you not blame her for wanting to prove people wrong?