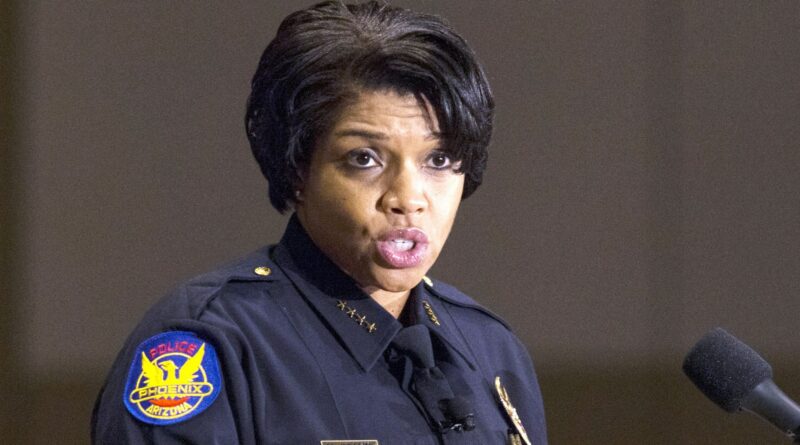 I’ve had my eye on social media over the past few days and I’ve been following the story of the Phoenix, AZ police offers who threatened to kill a Black man in a car with his family as they allegedly left Family Dollar with a stolen Barbie doll.

The below 2 minute clip has gone viral, sparking outrage all across the country.

But did you know…

Phoenix PD had the most officer-involved shootings in the country in 2018 with 44 police shootings.

When the record number of police involved shootings in Phoenix, AZ garnered national attention last year and was a top story in the New York Times, Police Chief Jeri Williams defended the Phoenix PD and said the media coverage of the high number of police shootings was “misrepresented.”

In the video, which was posted to the Phoenix PD Instagram, Police Chief Jeri Williams makes it clear that she is “disturbed” by the words and actions of the Phoenix Police Department. However, she goes on to say that their behavior is not representative of the majority of the Phoenix PD. And that’s what I, Lailah Lynn, have a problem with.

From a PR standpoint, Chief Jeri Williams is minimizing the actions of the police officers involved by stating that the actions of those particular officers do not represent the majority of the Phoenix PD. Although statistically speaking, she is correct. If only 10% of the Phoenix PD threaten to kill fathers in front of their children; then statistically speaking, those 10% of officers do not represent the majority of officers because they are less than half of the officer population.

However – and this is a big effing HOWEVER – this is not a statistics class! This is real life with real lives being threatened! And I am appalled that this Black woman would trivialize the bad behavior of those White officers by saying that they don’t represent the majority of the Phoenix police department.

And I’m saddened to see this Black woman defend the Phoenix PD once again! I’m not surprised, but I am saddened by it.

And for those wondering why I am “bringing race into this” here are my beliefs that influence how I see this situation:

I believe that the racism engrained in this country has affected the behavior of both the Phoenix PD involved in the altercation and Chief Jeri Williams herself.

I believe racism is transmitted from generation to generation.

I believe the Phoenix PD who conducted the arrests were fueled by generations of racism.

I believe that the 13th Amendment allows for slavery as a punishment for a crime.

I believe that the police were the original slave catchers and the actions of the Phoenix PD are the vestiges of slavery.

And I equate Chief Jeri Williams to an Uncle Tom who has more loyalty to the people in power than anyone else, even herself.

Leave a comment and let me know what you think about Chief Jeri Williams message about the actions of the Phoenix PD!