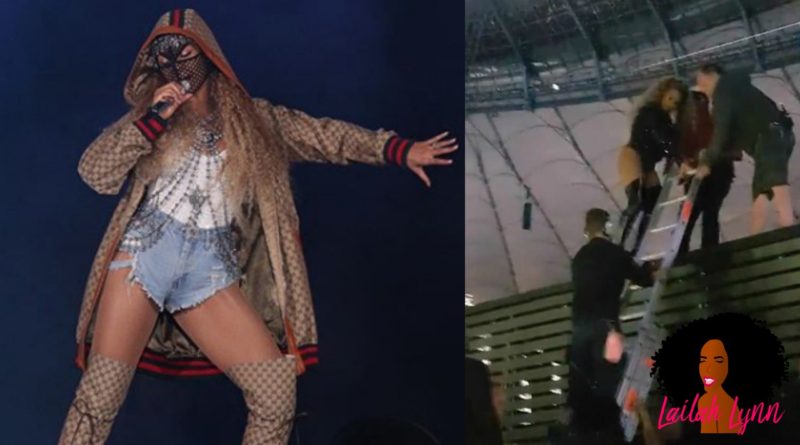 Beyonce and her husband, Jay-Z, performed in Warsaw, Poland, on their On The Run II concert tour over the weekend.  And the Poland concert was going great, but towards the end of their show on Saturday night Beyonce got stuck in the air on a “flying stage”.

The elaborate “flying stage” that’s featured as part of their performance malfunctioned, according to reports, leaving Beyonce stranded.

As Beyonce stood around, with no way down to the stage, stage staff gathered to discuss the situation before deciding to prop up a ladder to get Beyonce down. Stage hands brought the ladder on stage and propped it up, extending it to reach the flying stage.

But despite encouragement from a stagehand, and a group of nearby fans chanting her name, Beyonce initially seemed reluctant to step onto the ladder to make her way down.

But at the same time, Beyonce was not about to take her heels off! Ya’ll know Beyonce does not accept defeat and that stage was not about to get the best of her. So eventually she did climb down – heels and all!  But not before doing a little dance and keeping her crown entertained.