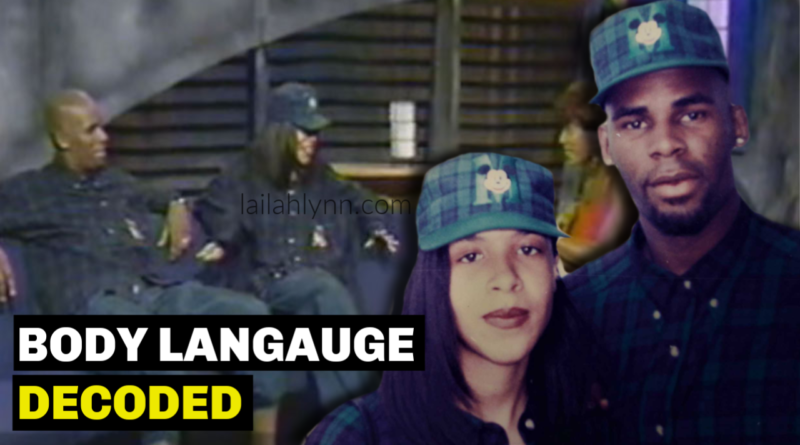 The first interview we’re going to examine is from BET Video Soul Gold and it took place in the fall of 1994, which was around the release date of Aaliyah’s second single “At Your Best”, from her debut album “Age Ain’t Nothing But A Number.” At this time, Fall of 1994, Aaliyah and R Kelly had just gotten married. It was only a rumor then, but we now know that that rumor was true and they were married. Their marriage certificate indicates that they got married on August 31, 1994. So in this interview, following the Aaliyah-R Kelly timeline, they are actually newlyweds, although they never admitted to being married to the public.

Back in the 90s it was popular for couples to dress alike to signify that they were together, together. And when you look at how they’re dressed, they’re definitely dressed like newlyweds. They come out dressed alike both rocking the University of Michigan/Mickey Mouse co-branded emblem on their shirts. Aaliyah was from Detroit, Michigan, so obviously she would want to represent her home town. And obviously she probably still liked Mickey Mouse because she was only 15. But R Kelly (being from Chicago) but representing for Michigan too revealed that he was representing for Aaliyah’s hometown as well, which makes sense if you view them as husband and wife because husband and wife are supposed to be “as one”. So already from their clothing choice you can see that they’re representing themselves as being united as one. So they’re sending a strong message before they even say a word!

Now let’s get into their body language. When they sit down you can see R Kelly positions his body in a very open manner. He spreads his legs wide open and he leans back and stretches his arms back onto the back of the sofa that they’re sitting on. And he nearly puts his hands behind his head, he is so relaxed. Now you might think that this open body posture meant that R. Kelly was open to the interview questions. But actually, by stretching out all of his limbs R Kelly is making his body appear larger and take up more space than it would normally and it’s actually a way of demonstrating control, not openness. This position is known as The Cowboy by body language experts.

And you can see that the two hosts are leaned in toward R. Kelly and Aaliyah, which signifies that R. Kelly’s posture of control was effective and the hosts felt like they had to physically come to him for answers to their questions.

You can also see that Aaliyah tries to mimic R Kelly’s relaxed posture. When she first sits down she doesn’t rest her arms on the sofa, she has them at her side. But once R Kelly sits down and leans back on the sofa she assumes the same position. But her positioning actually looks very awkward because her torso and her arms are open and leaned back, but her legs are tightly crossed. According to body language experts, women subconsciously cross their legs to appear smaller and more submissive.

So while R Kelly is stretching himself out to appear larger and therefore dominant, Aaliyah is doing two things with her body. She is trying to mimic R Kelly by positioning her arms similar to his, but she is also showing submissiveness to him by crossing her legs. So she’s both following his lead and being submissive to him in her body language.

And it’s clear, not only from the copycat outfits, but from how Aaliyah tries to copy R Kelly’s positioning that she has been trained to follow his lead. At this point R Kelly has already molded and manipulated Aaliyah to do what he wants her to do. Remember, R Kelly originally met Aaliyah when she was 12 and he was 24, so this is three years into their relationship at this point. And R Kelly has molded her to do what he tells her and follow his lead. And that’s what Aaliyah does in this entire interview, she follows R Kelly’s lead and says what she’s been told to say.

In another interview that the female host of this show, Big Leslie, did she explained that she was told not to ask if R Kelly and Aaliyah were dating, but she couldn’t resist asking because they were sitting in their faces dressed alike! You know how if somebody is putting something blatantly in your face you have to say something! But to soften the question, she also asked if they were cousins. And Aaliyah (at the 1:00 minute mark) avoids the dating question and only answered the question about them being related… Only answering the question about them being related is classic avoidance, which is a tool used to deceive people. Instead of flat out lying, people just simply avoid answering the question. And you see Aaliyah do that in this interview very clearly.

I want yall to keep in mind that the Video Soul Gold interview that aired was an edited interview, so we only saw part of what went on, we didn’t see the behind the scenes footage. Well, a few months after this interview, the male host interviews Aaliyah again and he reveals that Aaliyah was barely allowed to talk to him during the whole filming of this interview. So apparently R Kelly was keeping her from talking and socializing with this host behind the scenes while they were there at the BET studio, just like he keeps his other women in his home now from talking to other men…. R Kelly probably saw this guy as a threat since he’s nice looking, and he didn’t want Aaliyah talking to him. We’re going to examine that follow-up interview in a minute. But first let’s take a look at the legal actions Aaliyah’s family took after finding out about her and R Kelly’s marriage.

Although Aaliyah and R Kelly tried to keep their marriage a secret to begin with, Aaliyah’s family found out about their union and, according to reports, were ‘outraged’ and demanded an annulment, which Aaliyah agreed to in October of 1994. So they were only married from the very end of August that year until October of the same year. The BET Video Soul interview we just looked at was filmed in the Fall of 1994 – no specific air date was published except to say that it was the Fall of 1994, so following the timeline of R Kelly and Aaliyah, which shows they got married at the end of August 1994, it’s safe to say that they were actually married during that interview.

By January of 1995, Aaliyah and R Kelly’s marriage had already been annulled and she was attempting to move on with her career without R Kelly backing her. And instead she had her family, including her Mom, Dad and brother, accompanying her everywhere she went. In this next interview that we’re going to examine you’ll see Aaliyah’s family with her, and how her body reacts when she’s asked if her family is always with her.

In this interview with Video Music Box backstage at the Apollo at the 3 minute mark the host firsts asks Aaliyah to address the rumors that she married R Kelly. And she immediately starts rocking back and forth. It almost looks like she’s trying to comfort herself by rocking herself back and forward. These subtle changes in body language are what tell us what is really going on with a person. It’s not always the large, overt movements that people make that make it obvious what’s going on with them. A lot of times it is the small, subtle movements that indicate how they are really feeling. And body language experts say:

So Aaliyah’s initial body language of rocking herself back and forth indicated that she was uneasy with the question. But then you see when she’s giving her answer she is very rehearsed with her words and her movements and she basically says what her family and her team has trained her to say.

Later in this interview around the 7 minute mark the host asks Aaliyah about her family and if they are always with her. And Aaliyah goes from an open relaxed position to one with her legs crossed. Again, crossing legs is an indication of submission. And Aaliyah dramatically crossed her legs as soon as the host asked about her family. You see her pat her leg with one hand and then cross her legs, which made it kind of a dramatic gesture. Aaliyah crossing her legs so dramatically indicates that she was now being submissive as well as closing herself off. You can see she not only crosses her legs but also brings her whole body inward as if she’s hugging herself. This also indicates her uneasiness with questions about her family always being with her. Looking back, we now know that her family was NOT always with her and judging by Aaliyah’s closed off body language, that’s not a topic that she felt comfortable discussing.

Alright, so let’s fast forward to the second time the male host from the Bet Video Soul Gold interviewed Aaliyah. The first time Aaliyah and R Kelly were allegedly married. But this second time the marriage has been annulled. The body language is harder to read in this interview because they are playing basketball. But I want you to hear the questions the host is asking Aaliyah. Around the 3 minute mark the hosts points out that this is his second time interviewing Aaliyah, and that the first time he interviewed her she barely talked to him.

The hosts points out that after releasing two singles, Back & Forth and At Your Best, Aaliyah kind of disappeared. It was rumored that the reason Aaliyah disappeared from the media for a few months was because her family had found out about her marriage to R Kelly and her alleged pregnancy and went crazy! So it took a few months for them to get the marriage annulled and to separate Aaliyah from R Kelly.

Aaliyah was actually supposed to go on tour with R Kelly. And R Kelly had even gifted her with a puppy named Tour! …From the timing, it sounded like the Aaliyah and R Kelly tour was almost supposed to be like their honeymoon, just based on the timing! I know that might sound crazy, but the tour was scheduled for right after their August wedding, AND he gave her a puppy named Tour, so clearly the tour was very significant to them…

But when everything with R Kelly ended, Aaliyah had to re-group and re-start her career without R Kelly beside her. And her family arranged for her to tour overseas in Japan and Europe to get her away from R Kelly….

So clearly, you can tell from Aaliyah’s body language that she was very much controlled as a child. When she was a child and married to R. Kelly he was controlling her, which you can see in both their body language and their speech. And when she was separated from R. Kelly her parents took back control of her, and you can see that in her interview with her family present. Aaliyah was trained to give certain answers to questions about R. Kelly and she gave them in almost the same exact way every time she was asked, so you could tell she had rehearsed them and they were not exactly the truth.