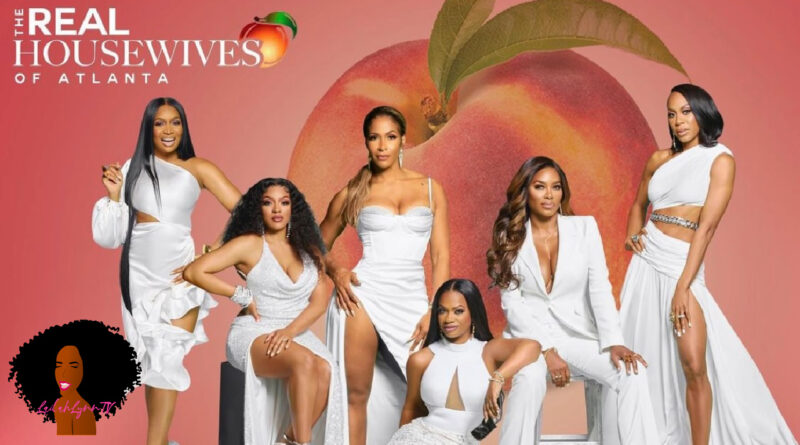 It’s almost time for The Real Housewives Of Atlanta Season 14 premiere and the ladies have actually taken promoting the new season into their own hands and re-shot the Season 14 cast photo!

The original cast photo featured the ladies dressed in gold and silver metallic dresses. And they are posed much like the Housewives are usually posed, with their hands on their hips or upper thigh. And the shortest Housewives are seated. And the Housewives with the most drama (in this case, Kenya and Marlo) are front and center. Sanya Richards Ross and Sheree Whitfield are on either end of the cast photo in more embellished dresses.

The background is a light gray and the chairs that Kandi and Drew are sitting on are pretty plain.

And, apparently some of the ladies were not feeling the photo because they all agreed to take marketing into their own hands this season and redo their cast photo.

The new photo features the ladies dressed all in white with a peach background and it’s completely refreshing compared to the old cast photo. The ladies are posed in what looks to be more natural poses for their personalities.

You can tell they were not forced to put their hands on their hips like they were in the original photo. And Kandi actually got low with it and is laying on the ground.

Drew is posed like a queen giving you power, especially with her facial expression. And Sheree is giving you body and attitude with her hair pulled back into a ponytail, which I think fits her as her signature look.

Kenya is giving you power in her power pantsuit!! I can’t recall ever seeing one of the Atlanta Housewives in a pantsuit in the promo pic and Kenya is doing it!

The background is a peach representing the peach state, Georgia. And I feel like they are really repping for Atlanta the same way New Yorkers rep for the Big Apple. And I love it!

There’s also a new video to go along with the new photo.

RHOA insider Anthony Dominic tweeted about how the new cast photo came to be.

So what do you think about the RHOA cast shooting and designing their own cast photo and promo instead of what Bravo set up for them?

I think the fact that the ladies felt they had to do their own photoshoot and promo exposes a gap in Bravo’s understanding of the different wants and needs of each city’s cast. Not every city’s cast is going to want to be posed in a way that looks and feels stiff and traditional, almost like beauty pageant winners. Some casts are going to want a little more personality in their photos and I think this situation is proof that a “one size fits all” approach doesn’t actually work for all.

Leave a comment and let me know what you think about the old and new cast photos and promos!