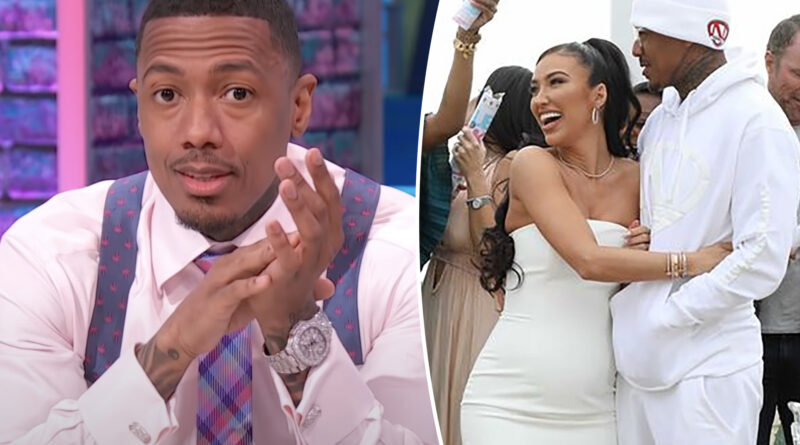 So as you all may have heard, Nick Cannon recently revealed that he is having another child, this time with model Bre Tiesi.  This will be Nick Cannon’s eighth child in 10 years, and the first one to be born since his son Zen unfortunately passed away.

The news of Nick and Bre’s pregnancy broke prematurely when TMZ posted pictures of their gender reveal party over the weekend.  And Bre has expressed her horror that her baby’s gender reveal was exploited by the media because she was trying to keep her pregnancy private.

And most people may assume she wanted to keep her pregnancy private because of the unfortunate passing of Nick and Alyssa Scott’s son, Zen.

And that may be true.  But there is another, LEGAL, reason she may have wanted to keep her pregnancy a secret.

If you count back the weeks of Bri’s pregnancy (Nick has revealed that she is 20 weeks pregnant) it looks like Bre allegedly got pregnant while she was still LEGALLY married to her former husband, Johnny Manziel!

The décor included pink, blue, and white balloons. At the party, the guests were provided with ‘cannons’ that, when fired, shot confetti that indicated the gender of Nick’s newest baby.  And the cannons shot blue confetti – indicating that the couple is expecting a baby boy.

Nick Cannon then confirmed that they are expecting a baby publicly on his daytime talk-show.  On the show, Nick shared a picture of he and Bre, and told the audience that he wanted to share the incredible moment with them. He said,

“This is me and Bri – the next mother of our child”.

And he mentioned how weird it sounds to say, “the next mother”, because he has quite a few children already.

Unfortunately, in December 2021, Zen, Nick’s child with Alyssa Scott, passed away at five months due to a brain tumor caused by hydrocephalus, which is an abnormal increase in fluid in the brain.

Nick talked about the difficulty of sharing the news on his talk show,

‘What is the right time? How do I share this?’ No one – we didn’t expect Zen to pass away … All of the news was so unexpected…I wanted to definitely respect the grieving process with Alyssa, and Bre was respectful enough to — She held off making our announcements and speaking on social media. She’s a very, you know, in the public eye type of person, but keeps her stuff private as well. And it was just one of those things like, you don’t – I didn’t know what to do.

So a lot of people are assuming that is the main reason that Nick and Bre decided to keep her pregnancy a secret.  But that may not have been the only reason.

It seems that Bre may have actually still been legally married when Nick Cannon impregnated her.

Bre Tiesi and 2012 Heisman trophy winner, Johnny Manziel, were married from 2018 until the divorce was finalized in November 2021 – about three months ago.

According to The New York Post, Bre is quoted as saying that vows were broken, and she subsequently filed for divorce from Manziel. And Bre’s closest friends threw a lavish divorce party to celebrate her dis-entanglement from her ex-husband.

Bre posted about the divorce party on her Instagram.  She said,

“I do, I did, I’m officially done. Thanks to all my girls for the craziest divorce party. No shade to J, wish you nothing but the best, love ya ❤️😂”

And her ex-husband seemed to not have been offended since he commented with several laughing emojis.

According to reports, their divorce may have been in the works since 2019, but it was not LEGALLY finalized until November of 2021.  And Nick Cannon has shared that he and Bre found out about the pregnancy in October of 2021.

Bre spoke out recently about her horror at her private gender reveal photos being made public.  She posted,

“Given the recent announcement regarding my pregnancy, I would like to address a few things. From the day that I found out I was pregnant, I was over the moon excited and filled with joy. I am still incredibly excited and eager to be a mommy,”

“I purposefully kept my pregnancy private for various personal reasons, and am horrified that this precious moment was exploited and plastered all over TMZ. This was not how I’d hope to share this news especially given that I’ve been able to protect this news for almost my entire pregnancy.”

So it seems that one of the various reasons that she was referring to, may have been her marriage to her ex-husband, which hadn’t actually LEGALLY ended when she and Nick got pregnant.