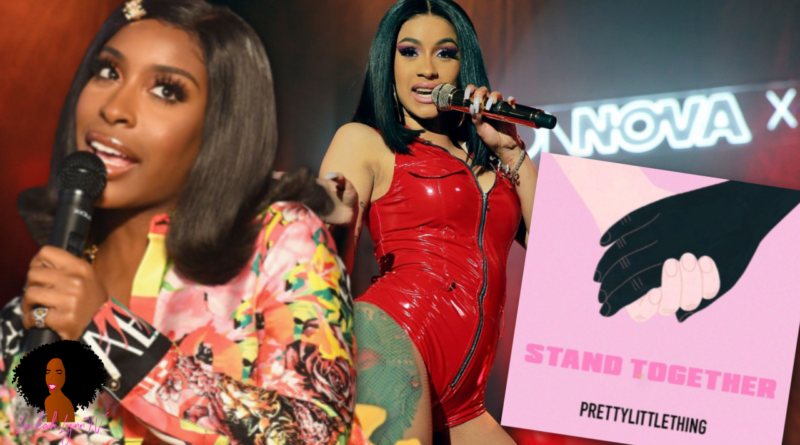 YouTube mega star and influencer Jackie Aina has called out fast fashion brands like Fashion Nova, Revolve and Pretty Little Thing for using our culture to shape the aesthetic of their brands but being silent when our people are being treated worse than animals in the street.

Brands like Fashion Nova and Pretty Little Thing in particular make millions on millions of dollars each year from our culture. They imitate our rhythm – the way we talk, the way we talk, and our overall swag. But when it comes to our blues – they are silent!

And so she is calling them out to pay their dues to the culture that they use!

After Jackie’s videos a lot of her fans were waiting for a response from the brands that she specifically called out and mentioned by name. And she posted that they had seen her stories.

Pretty Little Thing did respond to Jackie’s call out with a tone deaf illustration – they literally posted a picture in response to all that Jackie asked of them. Not a donation to the cause. Not a heartfelt message with a plan of action. But, literally a picture. A stock image at that.

And in the picture was a peachy colored hand holding a jet black hand. As if Black people are literally the color black.

And someone pointed out how PLT is aware of our culture and the words we use when they design their marketing emails. But when it’s time to address a real issue, they’re tone deaf:

Then another person pointed out that PLT actually just colored in a stock image and they purposefully made the choice to color it in jet black.

And someone else took the time to actually redo the picture and make it reflect actual skin tones, like brown instead of black.

Anyway, after Jackie called out these brands people assumed that the others hadn’t even responded, but Jackie explained that some actually called her and talked to her personally.

Speaking of cute, non-problematic brands, I made a video a few months ago about a brand called Risque Dukes that Fashion Nova had actually copied! This brand was started by a Black woman, a Black woman veteran at that, and Fashion Nova literally copied her style and sold it to their customers.

So when Jackie is saying that they use us, she means they literally TAKE from us. Not borrow, not inspired by, but literally take from us.

So it’s only right for US to call them out and demand they speak up when we are being targeted.

Jackie also shared Revolve and Lululemon’s response to her calling them out. And regarding Revolve, she shared:

This is how Lululemon responded, with a donation:

So it looks like Jackie Aina calling out these brands is starting to work. And I want to say this: I think these brands got it twisted when it comes to working with influencers like Jackie. I think, prior to now, they looked at Jackie as someone who influenced her subscribers or her followers or fans – basically consumers. But I think she’s showing them that she has the ability to influence them too!

Just like she can influence what makeup or clothes people buy based on her recommendations, she can also influence them and how they treat the culture that they steal from!

Leave a comment and let me know what you think about Jackie Aina calling out these brands for using our culture, but not contributing back to our culture!