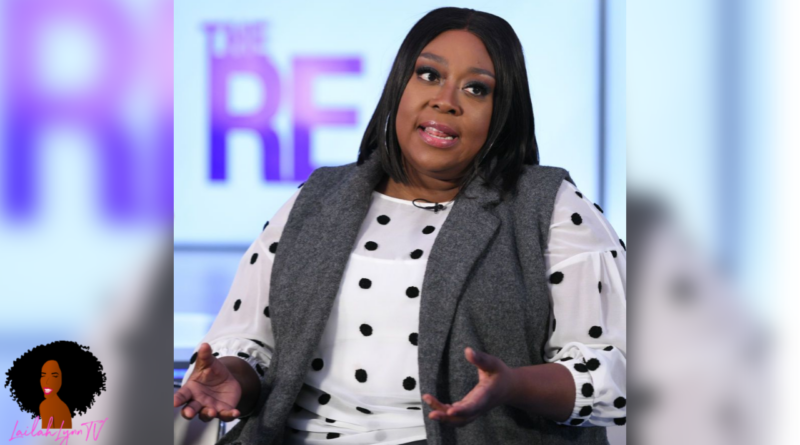 Loni Love recently say down with the women at Madame Noire for a revealing interview regarding Amanda Seales faces, claims that she got Tamar fired, and backlash for saying that a lot of Black women don’t know how to eat healthy.

MN: Recently, you were doing the WW ad on “The Real” and you got emotional saying that you were taught how to eat properly growing up. It caused a lot of discussion online because Black women felt like that was an incorrect statement to make or you were speaking for the entire Black community. Did you see any of that discussion online and what did you think about it?

I didn’t see any of that discussion cuz I was working on—I’m also the voice of “Bridezillas” so I was working on that. But I did hear about it. First of all, I never speak for every Black woman. If you go to my book, it actually explains how I grew up so my statement was for some women. Although, there were some women who were upset, there were a lot of women who understood what I was saying about accessibility capitalism has caused in the poor communities- that has caused us not to be able to eat clean. And not be able to eat the correct way. Which is why you see an obesity rate that is highest among Black females—more than any other race. Even with Black males. Black females have an obesity problem.
The thing that I realized about being on a show like “The Real,” I don’t have the time to explain myself. Unfortunately, we have 6-8 minute segments and you have four other hosts. By the time I get in, I may have 30 seconds and then we have to get out. So that’s one of the downfalls. But I also notice that when I’m saying something, I start a conversation. And that’s more important to me to start the conversation. And they’re conversations that we need to have as a community. It’s not meant to embarrass. It’s meant to have conversations. That’s my whole goal and that’s what my platform is.

[The diet company] is a tool to help some women if they want to try to learn how to eat right. 85 percent—and I didn’t know this— of weight loss is about what you eat, what you put in your body and I just was not taught that. Being from a project environment, with us having the government cheese and everything like that, a lot of us grew up like that. I think if people really understood my heart and where I was coming from—and a lot of sisters did— I feel like people may have felt an embarrassment of you saying we don’t know how…I didn’t say all women and I don’t speak for us. I’m giving you a tool to try to help you. I try to work with brands that want to help our community.
But there was also another component about it, which was Amanda who didn’t understand because she’s new to the show. She didn’t understand. She personally called me and she was like, ‘Yoo…you were talking and the next minute you started crying.’ And it’s like, “Girl, that’s what we do on the show. It’s called “The Real.” It caught her off guard and that’s why you see the reaction that she had. She was like, ‘Do you want to do an IG?’ I said, ‘No, Amanda, this is a show. This is “The Real” and this is what we do.’ And like I said, she didn’t have time to come back and go, ‘Loni?’ We just had to get out. So, it is what it is.

MN: The criticism Amanda Seales has received since she came on the show. I wanted to know how you all are handling it internally. Personally, watching you all interact. But the criticism can be a lot. You have all dealt with it. What do you think about the new wave of criticism Amanda is receiving?
You know, and I don’t speak for Amanda, I’m speaking for myself. I want to be clear about that. It is hard coming on a show that has already been established. That’s the first thing. It’s hard being on a talk show when you’ve never been on a talk show. It’s not a reality show. I think we’re used to only seeing Black women on reality shows. You’re not seeing more than one Black woman on a talk show. And it’s three different Black women right now on “The Real.” For Amanda, this is new territory for her. And I think she is actually maneuvering it very well. You have to respect the space that she’s in. She studies African American history. There was a reason they put her on the show. And we as a group have no problem with it.
Because society looks at Black females like, ‘It’s gotta be reality. It’s got to be drama.’ But you also understand the history of the show, “The Real.” If we would have started the show differently, then maybe wouldn’t be so like, ‘Oh, they don’t like her.’ Stop looking at it as a reality show. Look at it as a talk show. I think also because they put her on the show, some of the fans feel like they’re going to get rid of somebody. Nobody knows what is going to happen to “The Real.” They put her on, from what we were told, was because they wanted another voice. I agree with that. I like the different voice. I like what she brings. She brings something different. And it shows that not all Black women are alike. And that’s what we need. So for Amanda, it’s nothing but a learning curve and she’ll learn. I talk to her off line and I told her, ‘Look at yourself on tv, see how people are receiving you.’ But we all have went through it. This is just her period of going through it. And she has a right to be on that show.
The one thing I will tell her and I’ma put it on here so y’all write it out, is stop listening to what everybody else is saying and stay true to who you are. And that’s what she’s doing.

When you saw what the lady did with Extra, that’s that reality show stuff. We not a reality show. That’s why I grabbed her hand because I’m like, I know what’s happening. And Amanda feels like she’s being attacked and she shouldn’t feel like she’s being attacked. That question should have never been asked. Sorry! It’s supposed to be a soft interview. She’s dealing with a lot. It’s about a learning curve. But let her enjoy it. Let us enjoy it while we can. Like I said, we all get along. And let her make her faces. If she don’t understand, let her make her faces. I was trending, I was happy. She called me and said, ‘This memes…’ I said, ‘What?’ I promise you when you’re booked and busy you like, ‘What?!’ I was like, ‘Girl, let them people have their fun.’

Deep down, we are talking about issues that no other show is talking about. We’re not gon’ be perfect. We’re going to make some mistakes. Let the people give their opinions. We have to let Amanda be Amanda. Let her be herself and she’s going to be fine.

MN: I don’t know if you want to talk about this or not—but Cookie Hull recently did an interview with Comedy Hype and she made some claims that it was you who wrote an e-mail to get Tamar fired and you wanted to be the only ‘ghetto’ Black girl on the show. You addressed it a little bit on “The Real” but didn’t say her name. So I wanted to know what you thought about that.

I do have thoughts about that that I addressed in my book. But I will say this, anybody that knows me, knows that I will not describe myself as a ghetto girl. I wouldn’t describe Tamar Braxton as a ghetto girl. I might say that we believe in the power of being ourselves. But ghetto girl?! I would never do that. And also, there’s a lesson in this. When you try to help people, you have to watch who you help. I’ve never been against any Black woman. My fans know that. That’s the reason why I wrote this book. When you read the book, you will see. I’ve been trying to get the truth out for years. But here, we dealing with this reality show type [mentality]. I do address that in my book.

What do you think about Loni Love’s responses? Leave a comment and let’s discuss.

One thought on “Loni Love Addresses Amanda Seales Faces, Claims That She Got Tamar Fired & More In New Interview”