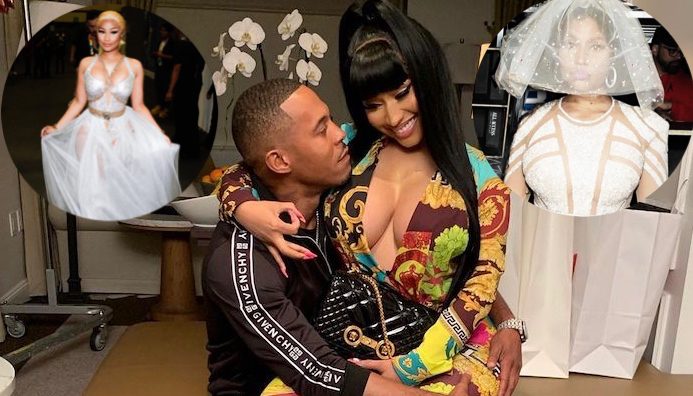 Nicki Minaj recently took one of her yearly 3 month breaks from social media. She accepted her Billboard award in December 2019, and then went MIA shortly there after.

When she returned her slim look had people wondering if she’d gotten surgery.

Bossip reported Nikki was hips galore, but she seems to have slimmed down a lot especially in the posterior.  The outlet said, “she looks exceptional, we can’t lie, but is it organic?”

And fans believed she’d gotten everything knifed up “from her eyes to her thighs.”

However, there’s no need to wonder what’s going on with Nicki’s weight loss. Nicki Minaj was very candid about her fitness journey during the latest episode of her radio show “Massive Attack” sharing:

I was trying to do this diet and I kept putting it off. I didn’t think I could have the discipline in what I ate. Once my mind was committed to it, my body committed to it. I’m still 20 pounds away from my goal weight.

It seems that Nicki Minaj may be trying to reach her goal weight before her upcoming formal wedding ceremony to husband, Kenneth ‘Zoo’ Petty.

Nicki told Revolt Magazine in October 2019 that even though her and her husband had done the legal part of their marriage, she still wants a formal wedding ceremony.

You know when you’re a little girl and you want this big beautiful wedding, and I used to think I was one of those girls, I always wanted the fairytale. But then the things that used to matter to you don’t matter as much because I remember wanting those things with people, where real love wasn’t there. So now I feel like now that everything has finally lined up and matched up being that I’m madly in love with this man, he’s also my best friend, the things that used to matter to me before, don’t matter as much now. So yes, we’re going to have a big wedding eventually.”

What do you think about Nicki Minaj’s new, slimmed down body?