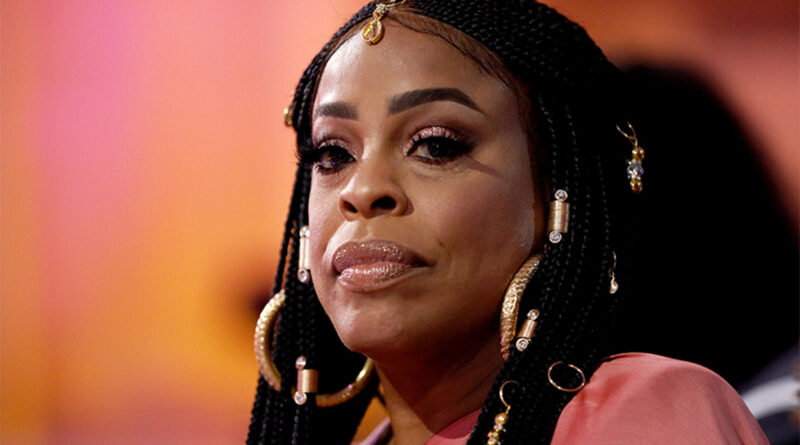 Niecy Nash is that chick! I’m SO moved by her speech at the Essence Women In Hollywood Luncheon where she explained how she managed to break free from her family’s expectations of her and choose HER when deciding to leave her unhappy marriage.

Niecy Nash was married for 13 years to Don Nash before filing for divorce in June 2007.  She then later married Jay Tucker during a lavish TLC-televised ceremony in Malibu in 2011 .

However, back in 2019 Niecy Nash ended her marriage with second husband Tucker due to the strain of living in different cities as well as tensions over her graphic sex scenes on the TNT show CLAWS. And the additional cosmetic surgery she’d undergone also played a part.

There was a huge myth that I inherited from the women in my family which is, ‘You are nothing without a man. Get one, keep one, no matter what — blind, cripple, crazy, married or lazy — get one, baby girl, because they will validate you!

But of her failed marriage to Tucker, she said, “When I owned we were better friends than life partners, my family was quick to say, ‘But you all look so good together.’” And, “‘Well, if the man ain’t beating you, what you leaving for?’”

“The one that made me laugh the most was an ode to him being attractive. [They said,] ‘Well, you never had to put a sack on his head to sleep with him.’”

“And I replied, ‘What about my happiness?’ The untethering from my family’s beliefs, the internet’s expectations and my marriage ending caused me so much pain.”

Nash continued, “Pain is putting things in necessary order. You’ve got to acknowledge how you feel. Trust that it is so much easier to walk in your shoes than it is run towards a lie.”

She continued to the power crowd at the Beverly Wilshire luncheon, which included Ava DuVernay, Billy Porter, Issa Rae, Gabrielle Union, Janelle Monae, Lena Waithe and host Eve, “This long line of women that I come from had never been taught what choosing themselves looks like.”

“You’ve got to own the part you play. I encourage you to walk in your truth, live your trauma and live your best damn life.”

Now as a proud single woman and mother of two girls, Nash added, “I am the most grateful because I now know myself much better than before.”

“I let my daughters watch me walk through the whole thing. Because I want them to get up every single day and choose themselves,” she said, holding back more tears.

“I realize I did right when my daughter said to me, ‘I am so proud of you, and I want to be just like you when I grow up.’ [My] generational curse is broken!”

I’ve heard people reference single motherhood, and other forms of singleness as being generational curses. But I agree with Niecy Nash that insecurity and the need to have a man to validate you can also be passed down from generation to generation and that’s not healthy!

2 thoughts on “Niecy Nash Speaks On Breaking Her Family’s GENERATIONAL CURSE Of NEEDING A MAN Whether ‘Blind, Cripple, Married or Crazy’”