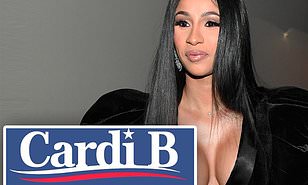 Back In August of 2019 Cardi B sat down with Bernie Sanders  where they filmed a Presidential Campaign. Leading up to the sit down, Cardi had been touching on politics here and there.

Whether she was discussing taxes, health insurance, government shutdown, social security, or chiming in on POTUS she didn’t mind being outspoken on any matter.

“ I think I want to be a politician. I really love government even tho I don’t agree with Government.”

“No matter how many weapons a country have you need people! How are you trying to go against a country and possibly start a when this country lacks patriotism? I barely see people claiming they LOVE being American.”

Cardi then acknowledged that she’d after further explain herself through video.

She came back later and added:

“I do feel like if I go back to school and focus up I can be apart of congress. I deada** have sooo much ideas that make sense. I just need a couple of years of school and I can shake the table.”

I love Cardi’s confidence and belief in herself. Most of the time that’s half the battle! So I’d love to witness her (or other women like ethnic-minority first-term Democrats Alexandria Ocasio-Cortez, Rashida Tlaib, Ilhan Omar and Ayanna Pressley) continue to focus on their education and continue to become elected officials. Leave a comment and let me know what you think!