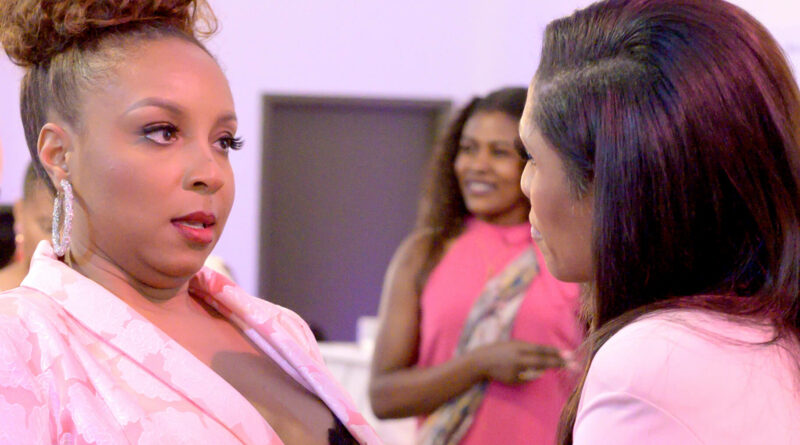 Sunday night on Married to Medicine I saw what had to be the strangest scene I had ever scene on this show so far. Dr. Jackie, who is a well-respected Obstetrician and Gynecologist got on stage at her book cover reveal party and announced to the crowd that, Buffie, the newest member of the cast, is infertile.

The weird, awkward silence around the clip of Jackie saying that on stage made me think that this had to be the case of bad editing and maybe she was going through the crowd one by one and saying how she could relate on some level to each woman there.

In my mind I’m trying to make sense of it, so I’m thinking she might have told each of the ladies how she can relate to them kinda like how Quad was singling people out at her book release party.

But according to Buffie, it was not bad editing or a trick of the camera. Dr. Jackie really did single her out on stage and call her infertile, which is not actually true.

When the preview of the show was released Buffie posted on her Instagram:

And Sunday night after the show aired Buffie posted quotes from Michelle Obama and Gabrielle Union about miscarriages and pregnancy loss.

The comment did seem insensitive and definitely out of place. But Dr. Jackie has tried to explain her side of what happened that night. She did a phone interview with Bravo Daily Dish and she said:

“I hate that it happened. You know, if I could definitely take it back and do it all over again, because I really was not aware what Buffie wanted to share. And I can certainly say it isn’t my place to share. But after we had talked about it throughout the group I really thought it was OK.”

“And so, certainly being a physician, and, you know, a board-certified physician who takes care of tons of celebrities and people from all over the country, I would not have shared something like that had I thought it was not OK with her. You know, I am sorry. I should have asked her, and I hate that [it hurt her]. That is what definitely bothers me the most.”

“We actually talked on Mother’s Day about motherhood being nature versus nurture and that we nurture a lot of young people and we were really mothers. And so, just that little text conversation, a short text, and her being open about all of her life, I thought OK. And I really didn’t even plan the speech. I just got there in the moment, and I started talking.”

“I really did intend to connect with Buffie and all of the women in the room who could relate to infertility. I actually went throughout the room, and I talked about infidelity, I referenced my husband [Curtis Berry] by looking at him. I talked about infertility and really was saying to her that that was something we shared and we knew how it felt. And the group definitely empowered women around that,” she said. “But when you look at it, it’s like, ‘And Buffie, you’re infertile.’ Um, we know that’s not my nature, and I would have never done that in a malicious sense. And I hate that it looks like that. But most importantly is to just let every woman know, one, I’m human. I made a mistake by sharing it without asking her. But definitely with no malicious intent.”

“I’m desensitized to a lot of it. You know, we have to tell people they have cancer. And you don’t typically cry with them. Well, I think that, that we do cry with them. But yeah, I don’t know how to explain it, ’cause I can’t not be a doctor.”

Dr. Jackie also said that she wasn’t aware how upset Buffie was at her book reveal party.

“I didn’t see any of the tears, any of the upset faces or any of it until several weeks later,” she shared.

She also didn’t see Buffie’s Instagram post at first because she said Buffie had blocked her. So Dr. Heavenly forwarded Buffie’s post to Dr. Jackie for her to view.

Though Dr. Jackie said that she and Buffie are not currently on speaking terms, she’s confident that they will talk about this moment again in the future. However, she also knows that it’s going to take time for her and Buffie to move on from this.

“I can’t force the healing. You know, she has to take her time and heal. So, I’m not saying she’s not hurt. It’s in her own time. So you have to offer to do a sincere apology and then just allow that person to heal.”