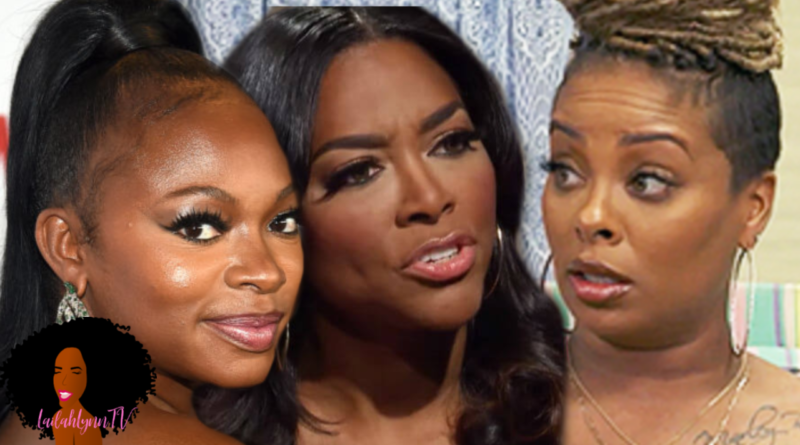 I almost don’t know where to begin with this whole situation with Eva Pigford Sterling and the comments she makes about Black women on the Real Housewives of Atlanta. It started last season with the comments about Shamea and her dark skin tone and the whole Blaque with a Q “joke” that nobody seemed to find funny.

And now it’s gotten to the point where she’s calling Porsha and Kenya nappy headed, despite the fact that she literally buys nappy hair and wraps it around her own hair. And on top of her RHOA shade, she’s even made fun of Naturi Naughton, who is not even on Real Housewives, for her edges.

So in this video where just going to recount every time Eva has called out a dark skin woman about her physical features like her hair, her eyes or her skin tone.

Now, to be clear, I’m not calling Eva a colorist, because it’s obvious that her baby’s father Kevin McCall has dark skin. And she famously dated Lance Gross, who also has dark skin.

However, I would like to bringing attention to the fact that there is a thing called Misogynoir – which is hatred or contempt directed specifically towards Black women where race and gender both play a role.

And someone, even a Black woman, could literally LOVE dark skin men. But have hate and contempt for dark skin Black women, because of their physical features like their skin tone, hair texture or even their eye color.

So let’s get into every time Eva has called out dark skinned Black woman because of their physical features and then we’ll get into what Eva had to say about all the “reading” she’s been doing on this season of the Real Housewives of Atlanta.

On Season 11 of The Real Housewives of Atlanta, Eva Marcille found herself in hot water after the comments she made about cast mate Shamea Morton.

When Eva, Kandi Burruss, Porsha Williams, Nene Leakes and Cynthia Bailey went to “ATL Live On The Park” on the Nov. 18 episode, they took in a performance by Shamari DeVoe and her group Blaque.

Eva took to Instagram to contend that her comments were not colorist. She posted:

Fast forward to Season 12 of The Real Housewives of Atlanta and Eva is still making controversial comments about the dark skinned women on the show.

When Eva was questioned for saying that she wasn’t sure what Kenya’s energy would be at her daughter Brooklyn’s party Eva said “I’m not here for these nappy heads” referring to Porsha and Kenya. And then started talking about how there’s “not enough edges in the group to keep gathering ponytails.”

To some people, Eva’s jokes about her darker skinned RHOA cast mates having nappy hair or not having edges may seem like just “light shade” or like she’s just going back and forth with the ladies since they go in on her too – I actually think it’s more than that because on a recent episode of The Real, Eva Marcille made fun of Naturi Naughton’s hair and Naturi is not even on Real Housewives.

When Eva was a co-host on The Real they brought up 50 cent making fun of Naturi Naughton by posting a picture of her making fun of her edges. While Loni was trying to point out that Black women’s receding edges should not be a topic that other Black people make fun of in public, Eva is actually co-signing 50 Cent and said that being made fun of because of receding edges is not a Black woman thing, it’s an every woman thing. And when Loni tries to say that it’s just a bad angle of Naturi, you can hear Eva saying “that’s a push back, she’s pushed back.”

Once Loni called out how Black people are often the ones making fun of other Black people, then Eva flip flopped and tried to act like she didn’t just say publicly that Naturi’s edges are “pushed back.”

Earlier this year, Ricky Smiley announced that he’s moving his show from Atlanta to Dallas this coming January as he takes over for Tom Joyner who is retiring. Tom Joyner’s morning show is the nation’s #1 syndicated urban morning show. (Y’all know urban is a code word for Black.) So now The Rickey Smiley Morning Show is about to be the #1 Urban/Black morning show.

And Eva is scheduled to move with Ricky and Gary With Da Tea. But now, sources are saying that Eva’s job on Black radio may be in danger because of her comments about darker skinned Black women.

Porsha posted Eva’s comments on the show on her IG calling out Eva for calling her and Kenya “nappy heads” and Kenya commented that she was shocked and utterly offended.

Y’all know when people start using phrases like shocked and UTTERLY offended, those are human resources buzzwords that they want some action to be taken. And it just might be. Not by Bravo but by “urban” radio stations that have a majority Black female audience.

Leave a comment and let me know what you think about Eva’s comments about Porsha, Kenya and even Naturi. Do you think she’s prejudiced toward darker skinned Black women? Or do you think she’s just being misunderstood season after season?