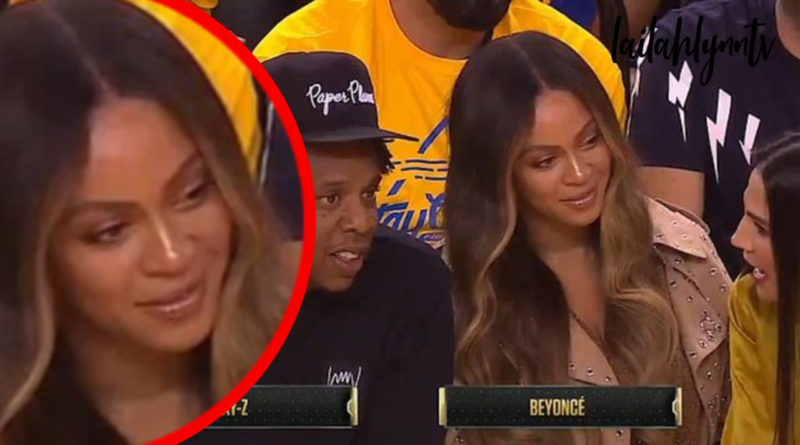 A clip of Beyonce Knowles-Carter has gone viral as it appears to show Beyonce low-key shoving a woman who cut across her to talk to Jay Z.

The clip shows Beyonce and Jay Z enjoying with Warriors game and even smiling and waiving at someone, when they look to be rudely interrupted by a woman, who has since been identified as Nicole Curran, the wife of the team owner.

In the clip you can see Beyonce’s smile turn into a frown as she patiently waits for the woman to finish talking over her. And if you watch Beyonce closely it looks as if Beyonce is annoyed that the woman has touched her leg or something because at the end of the clip when Beyonce re-adjusts herself she gives the woman a little shove. Check it out:

You can clearly see the shove at the end. And of course Beyonce stans were not having it! Check out some of the reactions on Twitter:

Anyway, the Beehive was hard at work trying to find out who this woman was who dared to disrespect Beyonce like that. And they found that the woman’s name is @warriornicole on IG.

She actually posted a photo of herself where she looks to be “helping” Beyonce with her jacket with the caption: “We should all help and support each other.”

And before she turned off her comments you can see that the Beyhive was in full effect!

Beyonce also posted some pictures from the night, including a video where she pettily cropped Nicole out of the frame:

In all fairness, Beyonce has been seen talking to Jack Gyllenehaal, at a basketball previously.

One thought on “Beyonce SHOVES A Woman For Cutting Across Her To Talk To Jay Z!”