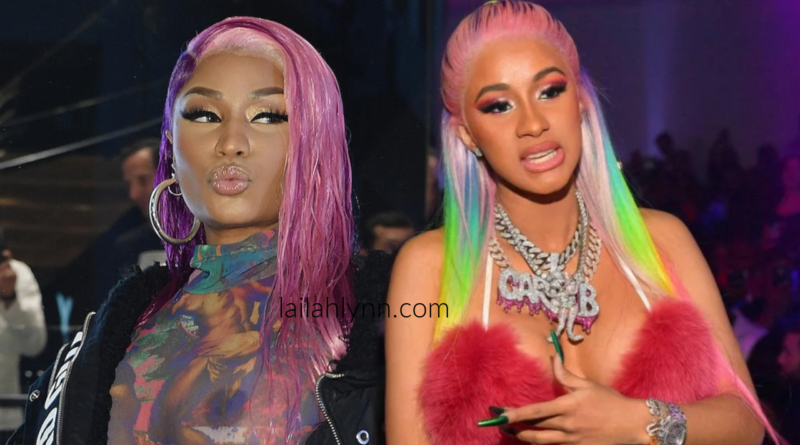 ICYMI, Cardi B has been under fired for comments she made in a live video from three years ago, that recently resurfaced. In the video Cardi B says, “I had to go strip, I had to go, ‘Oh yeah, you want to f–k me? Yeah, yeah, yeah, let’s go back to this hotel,’ and I drugged n—–s up, and I robbed them. That’s what I used to do.”

Since that old live has been dug up and gone viral, many people are saying that Cardi B should suffer the same fate of any other criminal that has drugged, robbed and raped people.

Cardi B has defended herself. And in a lengthy statement posted to her Instagram she said, “There are rappers that glorify murder violence drugs an (sic) robbing. Crimes they feel they had to do to survive. I never glorified the things I brought up in that live I never even put those things in my music because I’m not proud of it and feel responsibility not to glorify it.”

Apparently, Nicki Minaj is one of the rappers Cardi is referring to that has allegedly glorified crimes that they’ve committed in their music.

In a now deleted tweet, Cardi B responded to a Nicki Minaj fan that said Cardi B was headed to jail, just like Remy Ma.

Cardi B responded “You fav says the same in their lyrics so keep the same energy and get off my dick.”

The reference to “your fav” looks to be a reference to Nicki Minaj since the person’s screen name is NickiDelRay. And allegedly, the Nicki Minaj lyrics that Cardi is referring to are from Nicki’s song “Miami” from her Queen album.

In that song Nicki raps,

I flew in from Trinidad, peep this nigga pressin’
I think that he popped a molly ’cause look how he sweatin’
I’ma let my niggas rob him as soon as it set in

So from first listen it might sound like Nicki is saying that she set up a robbery the same way that Cardi B confessed to setting up robberies in her live video. And that’s why Cardi B said what she said in her tweet and Instagram post about other people glorifying crime in their lyrics.

But from my understanding, Nicki Minaj is not talking about an actual crime she committed in this lyric. She’s playing off of Trinidad James song where he says “popped a molly now I’m sweating.” Nicki’s lyric is a response to his lyric.

What Nicki is doing is telling a story in her lyrics, not necessarily confessing to a crime. At least that’s what I get from it!