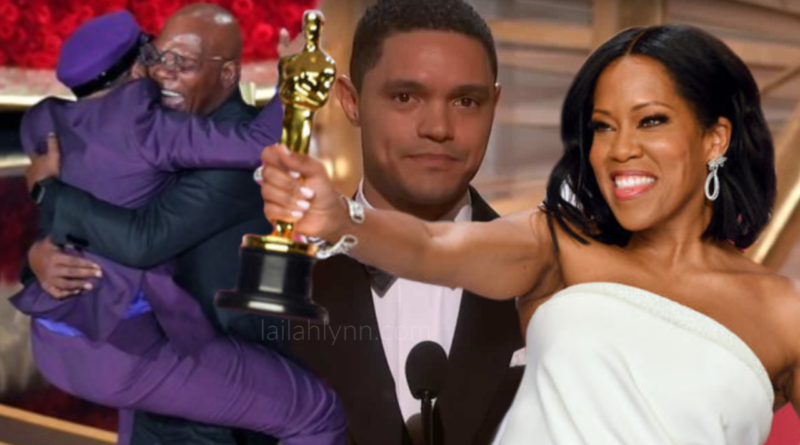 Black History Month started off kinda rocky, but last night #OscarsSoBlack may have just saved Black History month! Last night was quite the night for Black actors, actresses, producers, directors and designers who have worked hard for YEARS who were FINALLY acknowledged by the Oscars!

somewhere between Regina King being deservedly celebrated and Green Book getting begrudgingly acknowledged, Trevor Noah gave a unique introduction to Best Picture nominee Black Panther. The Daily Showhost, who was born and raised in South Africa, cheekily referred to his time growing up in Wakanda under the rule of King T’Challa. He then ended on a more sentimental note, delivering a heartfelt message in the Bantu language of Xhosa. At least, that’s what he lead viewers to believe.

In reality, as a number of outlets have reported, the phrase Noah claimed translates to, “In times like these, we are stronger when we fight together than when we try to fight apart,” actually translates to “White people don’t know that I’m lying.”

Also awarded last night was Mahershala Ali, who became the first Black male actor to win two Academy Awards with his second Best Supporting Actor trophy for the film ‘The Green Book.’ He scored his first Academy Award for best supporting actor for “Moonlight” in 2017, so he is definitely on a winning streak.

Spike Lee also won an Academy Award last night and threw a little shade at ‘Green Book’, but we’ll get to that in a second.

Spike Lee won the Academy Award for Best Adapted Screenplay for ‘BlacKkKlansman,’ marking the filmmaker’s first Oscar win. In case you didn’t see ‘Blackkklansman’, it’s about Ron Stallworth, an African American police officer from Colorado Springs, CO, who successfully manages to infiltrate the local Ku Klux Klan branch with the help of a Jewish surrogate who eventually becomes its leader. And the movie is based on actual events.

In Spike Lee’s acceptance speech he directed people to ‘do the right thing’ in next year’s election after talking about America’s history of slavery.

President Trump took that speech as being a “racist hit” on him and responded on Twitter.

I don’t think mentioning America’s history of slavery automatically makes a speech racist. Our country has a racist past (and present) and that’s just reality. So if Spike Lee wants to speak on the slavery IN HIS OWN FAMILY, then SHAME on 45 for berating him!

The movie ‘The Green Book’ has been compared to ‘Driving Miss Daisy’ because it also has a more Hollywood friendly story of race relations that makes White people more comfortable compared to movies like ‘Do The Right Thing’, which is why Spike Lee made the comments he made after he won his award:

Ruth E. Carter made history as the first African American woman to win for Best Costume Design. And those who’ve seen the move ‘Black Panther‘ know exactly why. Her afro-futuristic costume designs were simply amazing and she deserves every award she’s received for them. Carter’s been nominated for Oscars twice before, for her work in Spike Lee’s Malcolm X (1992) and Steven Spielberg’s Amistad (1997).