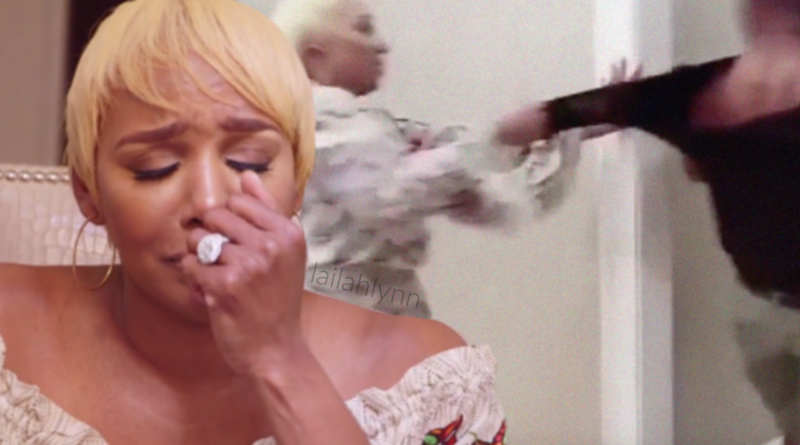 In case you missed it, the mid-season trailer of the Real Housewives of Atlanta was released just the other day, and it was a mess! (kinda)

For most of this season, Season 11, the Real Housewives have been a bit boring to me. Just being honest. Although I enjoy the fact that there hasn’t been any ugly or messy drama this season, compared to the previous season, I still feel like the producers should have tried harder to steer the show in a more entertaining direction.

Their little catfights about who shaded who, and who can’t dress, just don’t do it for me! But I’ve been holding on hoping the show would pick up later in the season, and it looks like it just might, based on the trailer.

At the end of the trailer you see Nene jump up and attack a cameraman! You can see her pull him by the arm and attempt to lunge at him. I’ve slowed it down so ya’ll can get a good look at it.

It looks like they may have been filming in her home and as you hear someone ask if there is a bathroom nearby the camera man turns to go down the hallway and Nene grabs him by the arm and attempts to keep him from going down the hallway.

I’m trying to figure out why Nene was trying to stop this cameraman from going down the hallway, and two scenarios are coming to mind.

The other scenario is Nene trying to stop the cameraman from filming near her bathroom. Earlier in the trailer the ladies discuss Shamari Devoe possibly drinking a little too much when they turn up, almost as if she has a drinking problem. And at one point you see the other ladies helping Shamari walk, as if she’s drunk and they are taking her somewhere to throw up. So I’m wondering if the cameraman was trying to film Shamari drunk and throwing up and Nene was trying to stop him.

But as far as the facts of the situation. You can see clearly for yourself from the video that Nene did in fact grab that cameraman, which could be considered an assault. And sources have leaked to the blogs that Nene was actually fined for attacking that cameraman and she was suspended from the show.

Allegedly, Nene Leakes is paid $200K for each episode of the RHOA. And she was suspended for 1 episode, which amounted to a $200K fine!

I know Nene is rich, but that’s still a lot of money to me! I could buy a whole new house for 200K where I live.