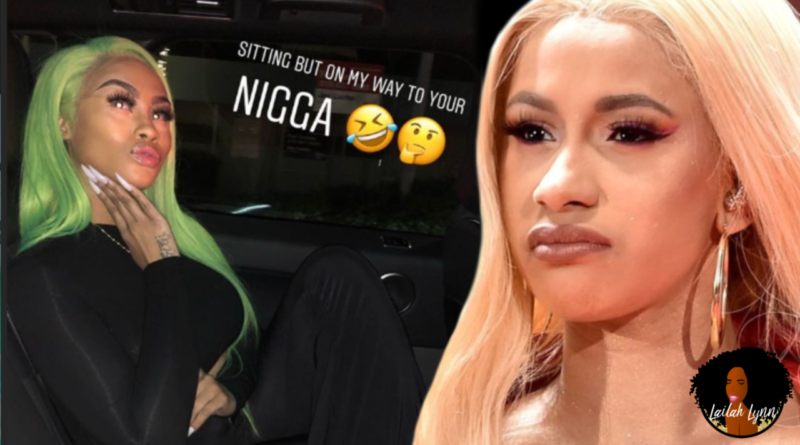 If you watched the video I just posted then you saw Cardi B going off on The Shade Room for posting her today. … But if you go to TSR Instagram page you can see the REAL reason Cardi B is mad about them posting her. So here’s what happened, TSR re-posted a picture Cardi B had posted on her own page with the caption “B sit down before I sit you.” Now, I feel like Cardi B could have been talking about a lot of people in that caption because she has beef with a lot of people, not just Summer Bunni. But anyway, Summer Bunni responded to the post on her page with a picture of her in the back of a car with the caption “Sitting. But on the way to your ninja.” And TSR re-posted Summer Bunni’s picture next to Cardi B’s picture talking about “Oop Summer Bunni put on her petty boots tonight!” Which is pure shade to Cardi B, and that’s why she’s going off like this. …

Now what y’all might not know is that Summer Bunni did an interview with Power 106 recently telling her side of everything, but it’s being blocked from coming out. In a live video that has since been deleted, Summer Bunni claims that Cardi B’s team has called up to Power 106 and told them not to post their interview with Summer Bunni. And she claims that Cardi B is stopping her bag. That’s what she’s saying in this live video that I recorded. The audio actually stopped recording because of an Instagram notification I received. But when I watched it, she was saying that Cardi B was stopping her bag. So when you hear Cardi B say in her live video that people are trying to make money off of her name, she is not just talking about TSR and bloggers, she’s talking about Summer Bunni doing interviews and getting clout off Cardi B’s name.

Personally, I think Cardi B is mad like this because she wants to go back to Offset and Summer Bunni doing interviews and still talking about the situation with her and Offset in the media will make Cardi B look stupid for going back to him. I think Cardi wants everything to just die down so she can go back to her husband in peace. She already told y’all she misses the ‘d’. … So IMO she is not going to make it thru the withdrawals and IMO she’s going back to her husband, which is her choice and her business. But if the media is still giving Summer Bunni a platform, it’s going to make Cardi look dumb for going back. That’s what I think! Leave a comment and let me know what you think! Do you think TSR is wrong for posting Summer Bunni when she shaded Cardi B? And do you think Cardi is getting back with Offset? Leave a comment and let me know what you think!