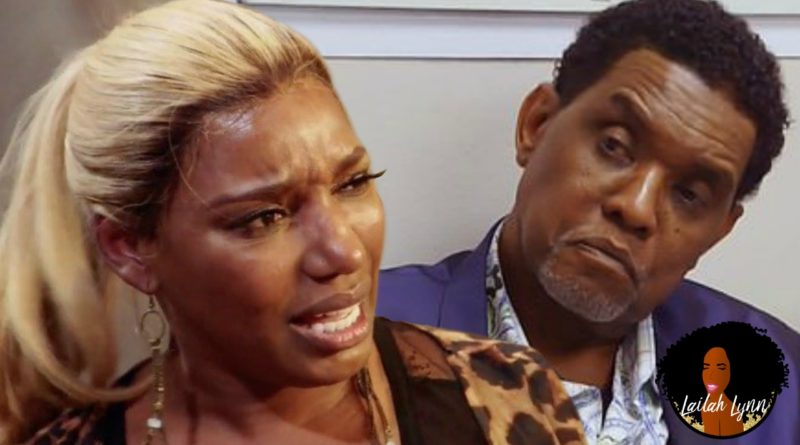 Nene Leakes is making headlines AGAIN today, this time for putting her husband Gregg Leakes on BLAST on social media last night.  Nene has not been quiet at all about how Gregg’s cancer diagnosis has affected their marriage over the past few months.  She revealed to US Weekly that they are not doing a lot of things they used to do as a couple before, including sleeping in the same bed.  She told the magazine,

he sleeps downstairs, I sleep upstairs, out of all the years we’ve ever been together, we’ve never done that before.”

And she also told US Weekly:

I need a f—king support system because so many people look at me and they say, ‘Oh, she’s so strong. She got this, you got this NeNe. I mean, God wouldn’t have put it on you guys if they knew you guys were strong, they knew you could handle it. Gregg has the perfect life, they can handle this. I’m like, ‘No, no, no, no bitch. I’m weak. Please come over here and support me.’ We’re not that strong. There’s a lot of things happening over here. There’s been days when I felt like I can’t do this anymore. Like I’m gonna have to leave Gregg, I cannot be with him anymore. Like, I’ve had every thought, because it’s been so difficult, and he’s not been the easiest patient in the world, so I’ve just felt everything.

I know caring for someone sick can be very hard for caretakers, even though I’ve never been one.  So I tried not to judge Nene when she said that she thought she might have to leave Gregg.  Even though most marriage vows do say ‘in sickness and in health.’

But now Nene’s lashing out a Gregg is getting worse and she’s clapping back at her own husband in his Instagram comments. 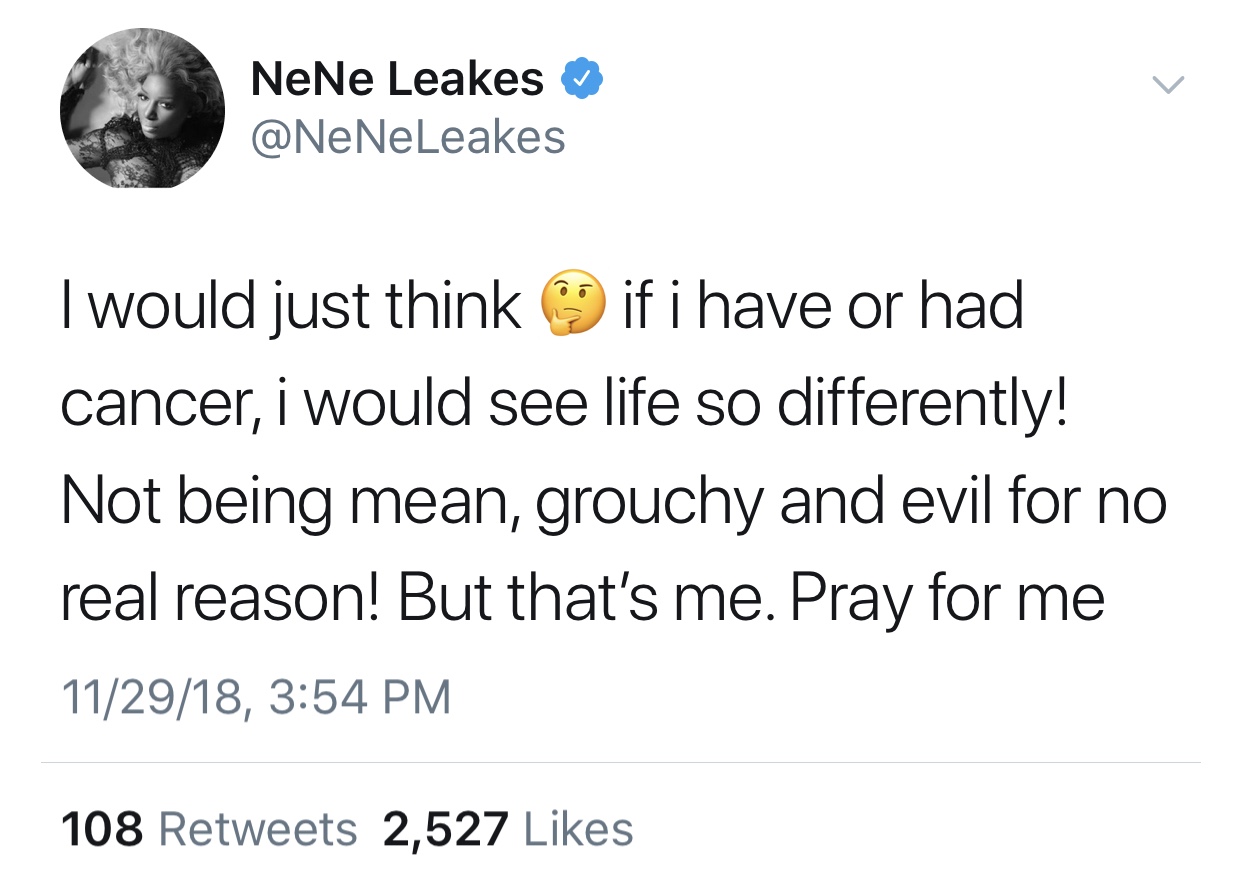 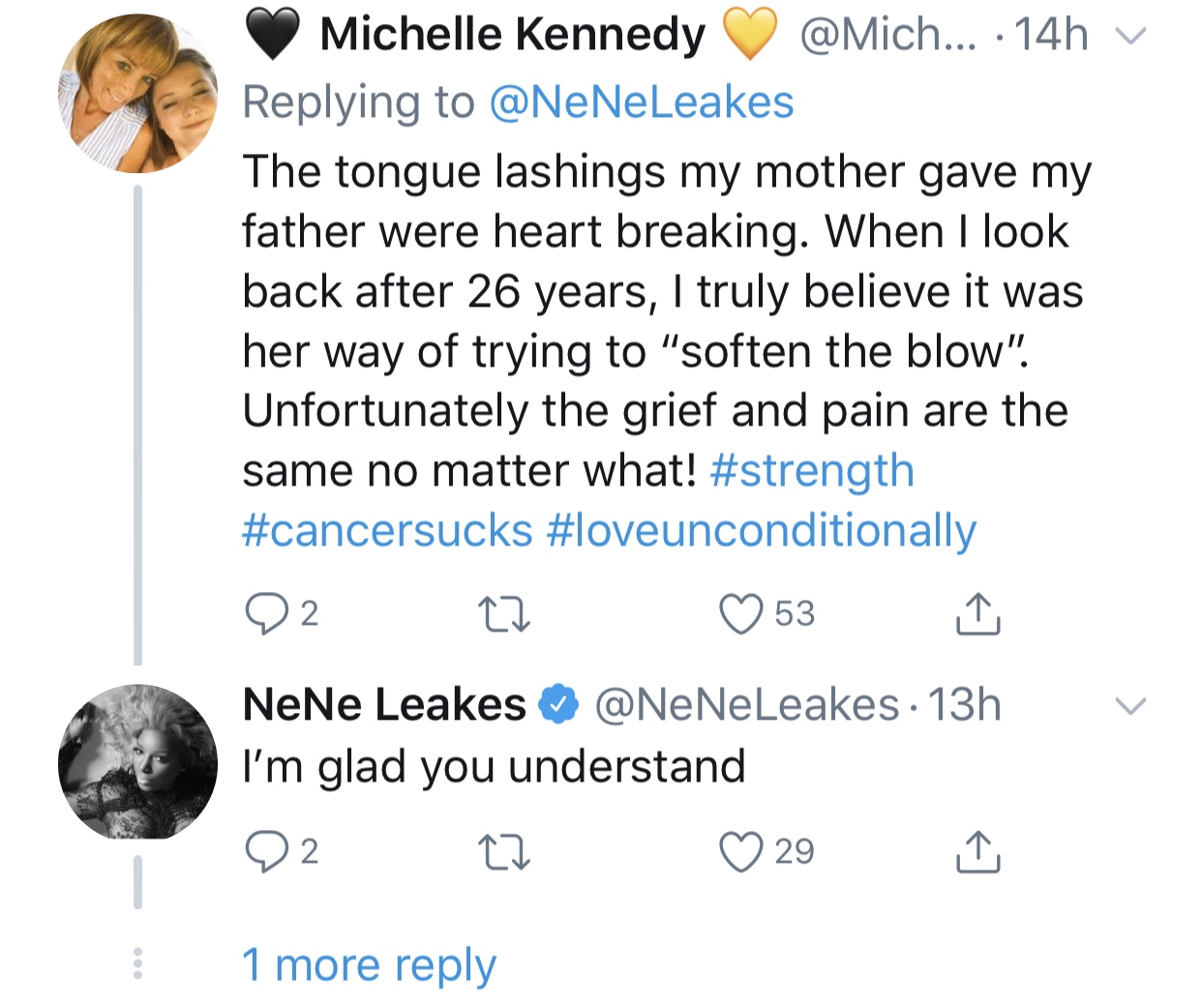 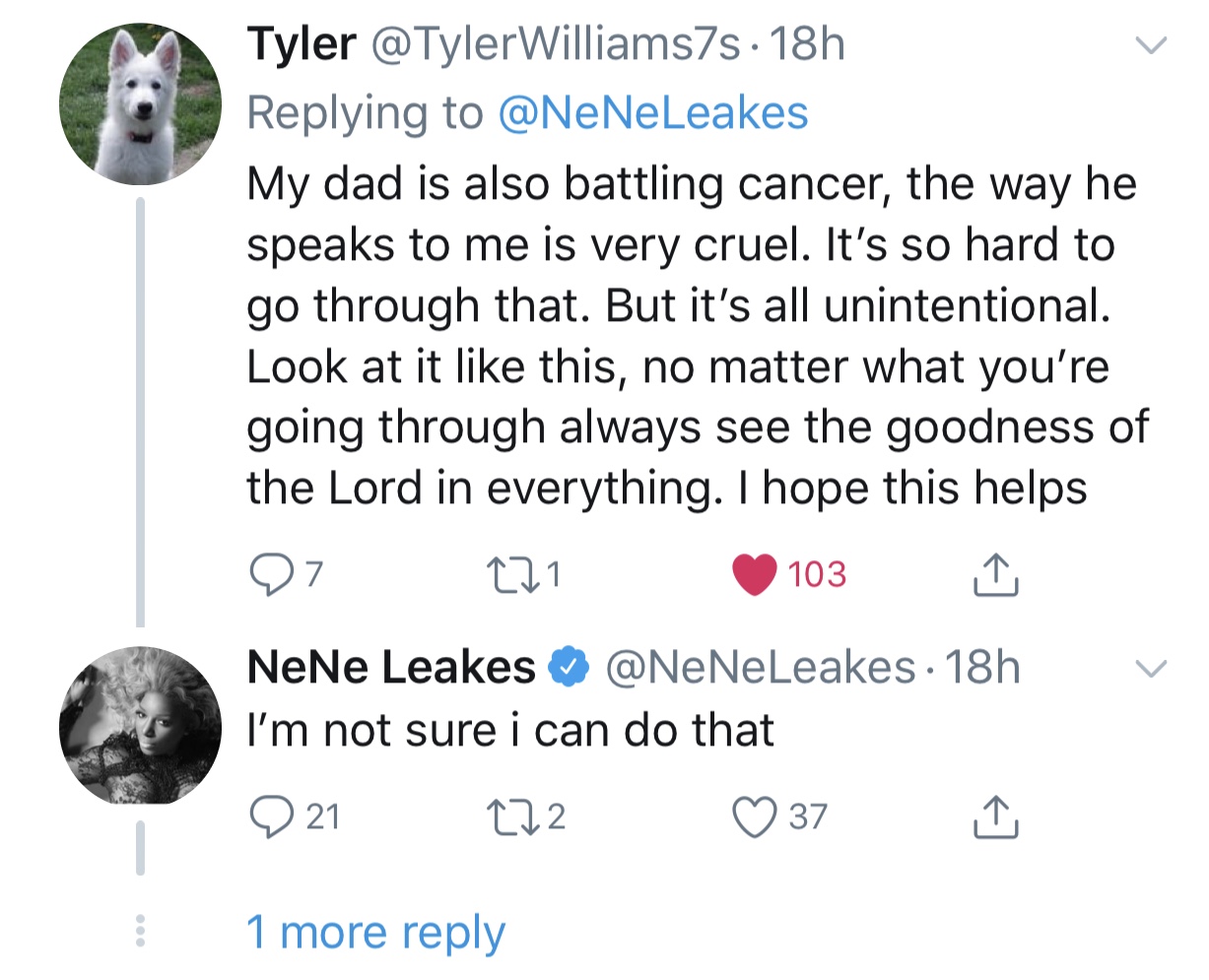 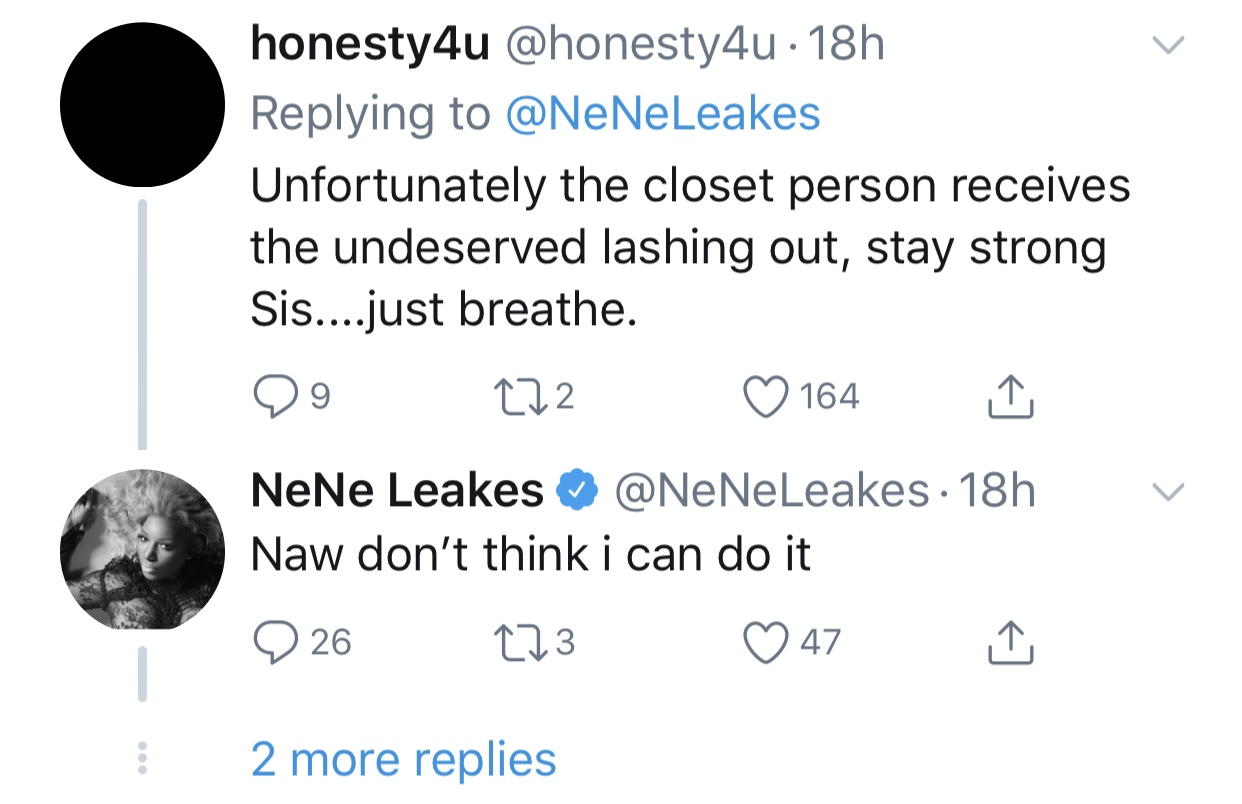 Then Gregg posted this touching tribute to brotherhood on his Instagram that reads:

To All my Men… Happy Brothers Day… Thx for touching my life..

Honey, when Nene saw that Gregg posted about ‘loving the people that treat you right’ she went off!

First she posted three eye rolling emoji’s underneath his post. 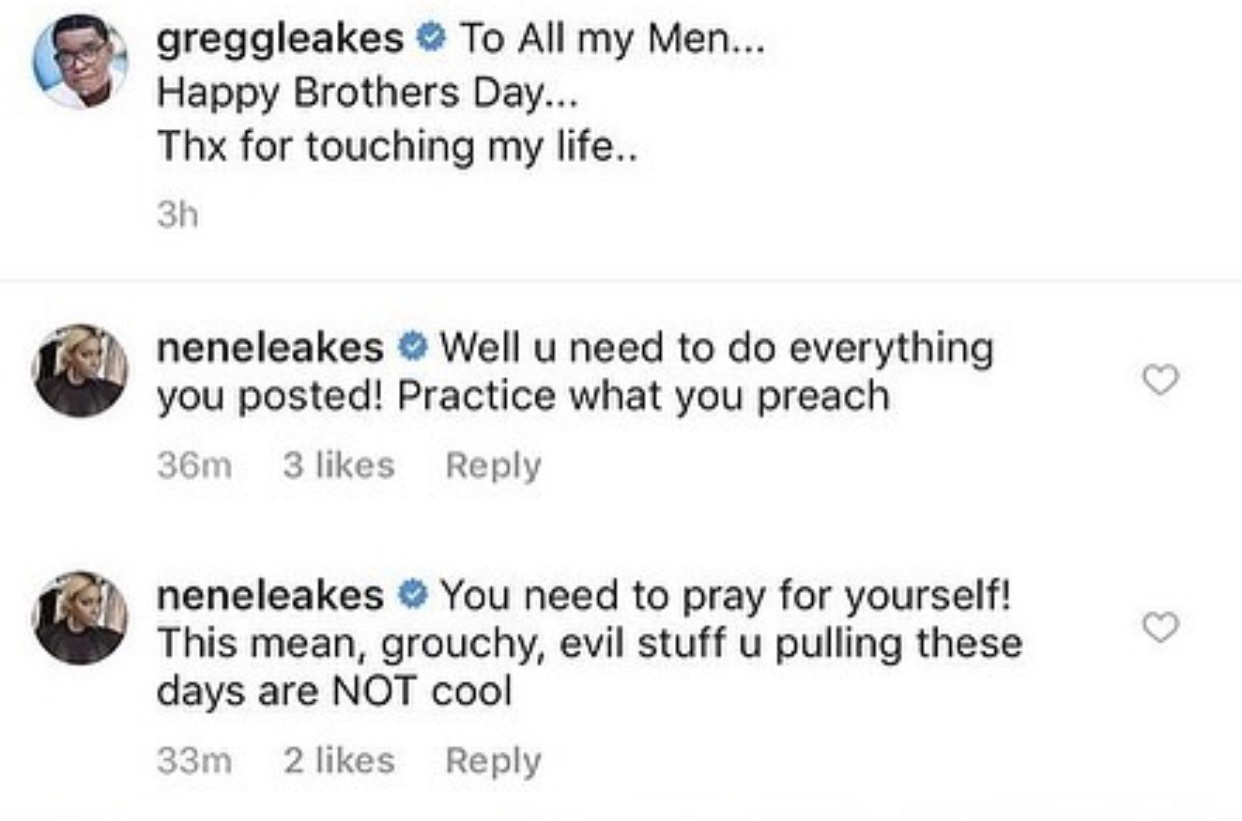 And of course some fans of Gregg chimed in and tried to check Nene for talking to him like that on social media. 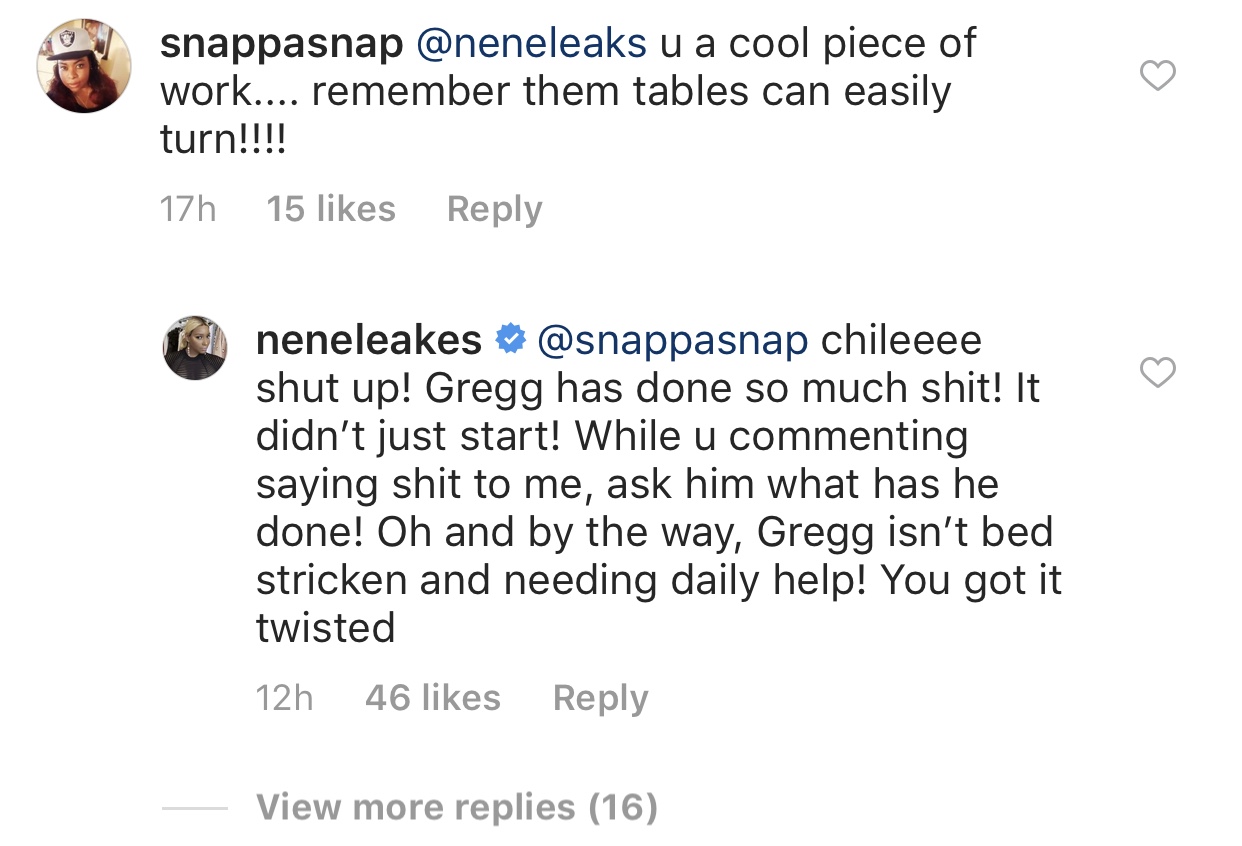 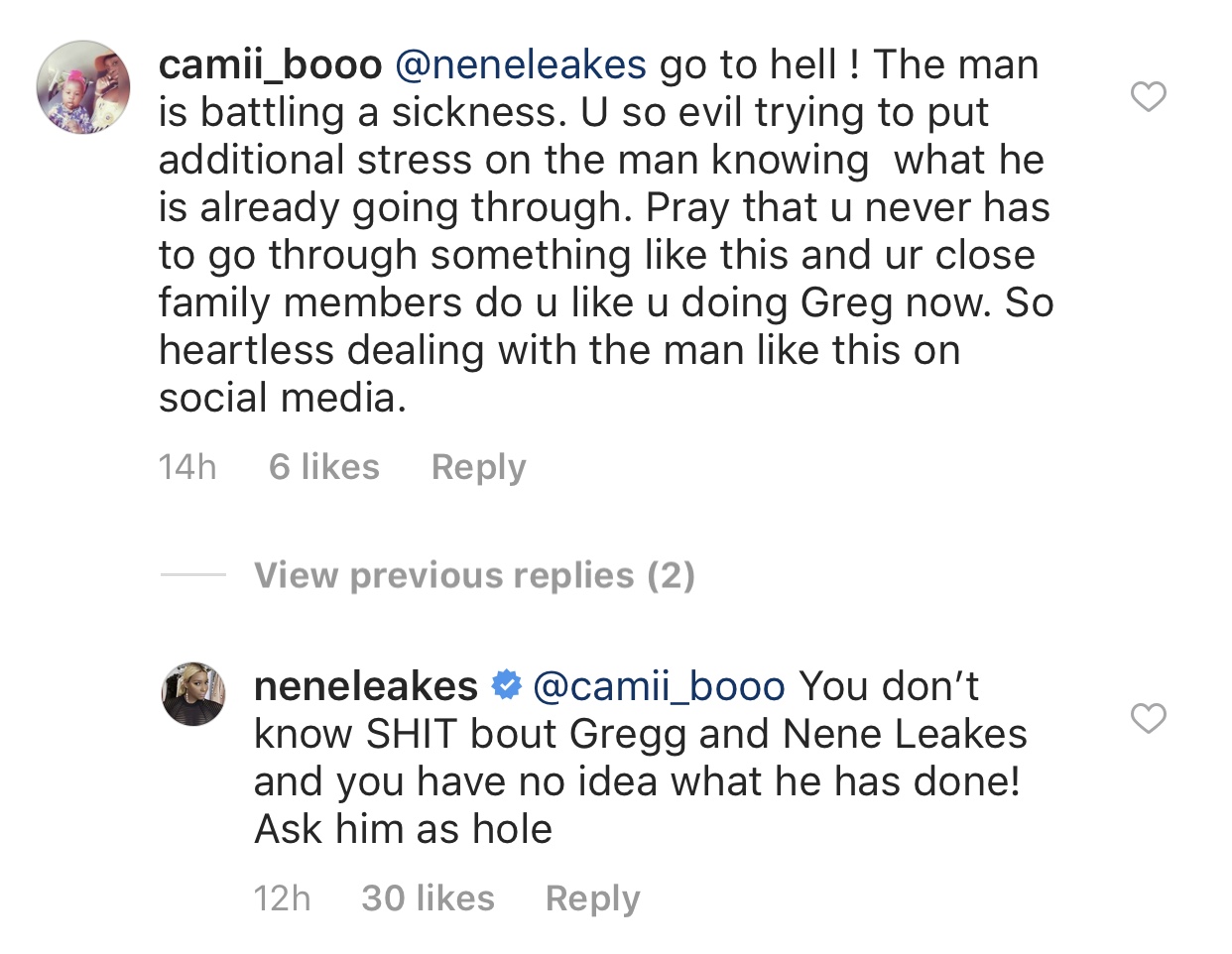 When it’s Nene you know there always has to be a misspelling! lol

Personally, part of me think that since they put their lives and their relationships on reality television anyway, her putting this mess on social media is par for the course.  I feel like since we’re probably going to see them arguing and not getting along on this season of Real Housewives of Atlanta then it’s not a HUGE deal for her to do this on social media.  That’s how I feel from the outside looking in.

But I think if I was in the relationship, like if I was in Gregg’s shoes, I would be embarrassed!!  He’s really battling cancer and was just trying to put something inspirational on Instagram to motivate other people – and here comes Nene messing it up!

Now don’t get me wrong, I do believe what Nene says about Gregg being mean & nasty toward her since he’s been sick.  I believe that he probably is grouchy and rude and all that she says he is.  I just think that there are other ways that Nene can vent, without turning to social media.  Like she can talk to her friends or something.  She can go tell Marlo how Gregg is being a grumpy, old man and I’m sure Marlo would understand completely!

I just hope that Gregg and Nene’s marriage makes it through his battle with cancer.  Nene seemed a little “too interested” when Shamari Devoe talked about being in an open relationship on last week’s episode.  Y’all remember she was asking Shamari to tell her how to do it!  So I hope she’s not thinking about doing something like that or even leaving Gregg.

One thought on “Nene Leakes BLASTS Her Sick Husband Gregg To RHOA Fans! ‘You should ask him what HE has done!’”