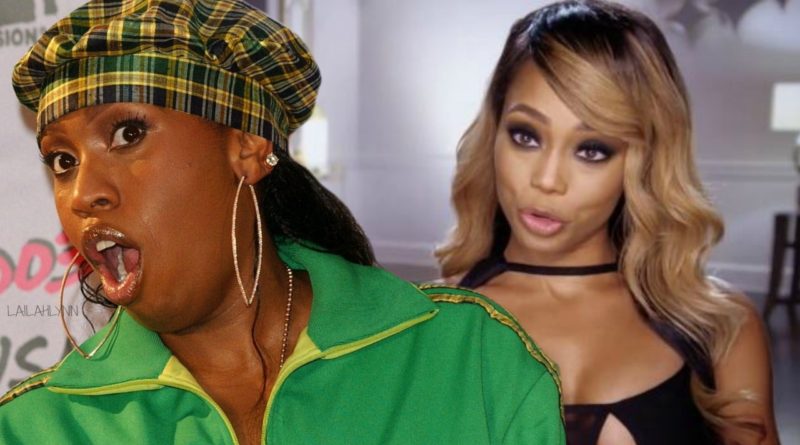 On last night’s episode of the Real Housewives of Atlanta called “Pass The Peach Throw The Shade”, new housewife, Shamari DeVoe, revealed that she and her husband Ronnie Devoe had an open relationship at one point and that she slept with TWO women while married to her husband, R & B superstar, Ronnie Devoe.

During the episode Shamari complained about Ronnie’s womanizing ways to his mother and described to the other housewives  how she became bi-curious during a bad patch in their marriage.

She said ‘I slept with two different women during that time, he probably slept with about 10’.

One of those women was Missy “Misdemeanor” Elliot. According to one of Missy’s friends, Shamari and Missy were a couple about a decade ago.

Missy and Shamari’s relationship was before her marriage to husband Ronnie, the insider claims. And it didn’t last long either. “Missy had a lot of girlfriends back then,” her friend told MTO News.

Now this is not the first time that Missy Elliott’s name has been dragged into a Real Housewives of Atlanta storyline.  Just last season Shamea accused Eva of having dated Missy Elliott and asked her how her fiance felt about it.

Missy Elliott did work with the group Blaque around 2002 -2003 before Shamari married Ronnie Devoe.  Missy produced a song called Ugly and and song called Freakazoid on Blaque unreleased album, Torch.

Now Shamari is opening up about having dated women during her marriage to Ronnie Devoe.  And the people are saying the reason she divulged this information is so that she could get in front of the story before the blogs and other people on the show found out about her open marriage and started to use it against her.

But, like she said, the whole open marriage thing didn’t work for her and Ronnie.  And now they seem to have gotten past the rocky part of their relationship and their marriage is doing a lot better – which I think means neither one of them is sleeping with other people at the moment!

And Shamari and Ronnie Devoe now consider themselves marriage ambassadors and they try to help other couples stay married too.  Check out what they had to say about their marriage in a recent interview on Sister Circle.

Leave a comment and let me know what YOU think about Shamari Devoe opening up about her and Ronnie’s open relationship on national television.  Do you think she’s doing the most just to have a storyline.  Or do you think she was trying to spill her own tea before the other ladies found out and spilled it for her?