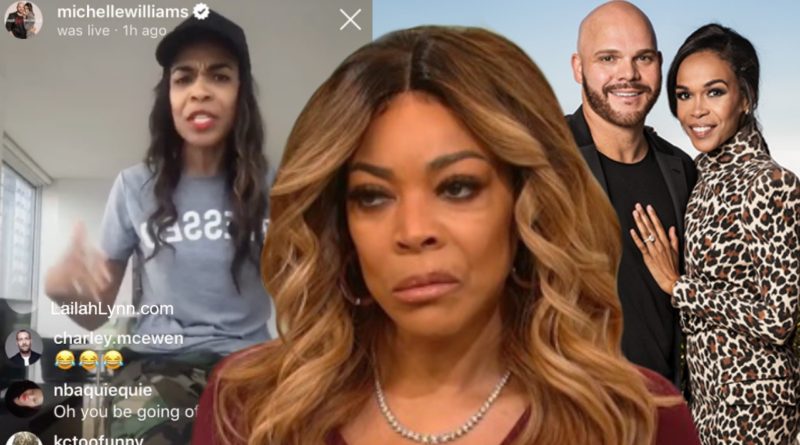 Since the premiere of the OWN television show #chadlovesmichelle, former Destiny’s Child member Michelle Williams and her fiance, Pastor Chad Johnson have been facing a lot of scrutiny on social media.  People specifically don’t like the comment that Chad made to Michelle questioning her mental health when she tried to explain Black culture to him.

Although Chad does have some features that make him look Black to some people.  He is actually not Black at all, and grew up around very FEW Black people.  So for him, some of the issues that Black people have to deal were apparently invisible to him, until now.

And now, he’s being dragged on social media for insinuating that Michelle had a mental health issue when she tried to explain a Black issue to him.  So Michelle got on Instagram live today – against the advice of her publicist and her PR team and tried to defend her man.  And in the process she low-key shaded Wendy Williams, who had some not so nice things to say about Chad and Michelle on her show the other day.

Here’s what Wendy had to say about Chad and Michelle on her show the other day.  She was very shady in true Wendy fashion even though she said she hadn’t even seen the show! Watch this clip and then leave a comment and let me know what you think about Wendy shading Michelle and Chad without even watching the show!

I think it’s funny that whether Michelle meant to or not, she low key shaded Wendy back just by mentioning the fact that her man is faithful.  Especially since Wendy’s husband has a whole nother relationship openly.

Here is what Michelle had to say to all her and Chad’s haters when she went live on Instagram.  Make sure you listen to the whole thing because she does address what other people say about her and Chad too.  And she said she doesn’t want her words chopped and spliced when people like me upload her video.  So make sure you listen to what she says in its entirety so you can get the context of her comments.