Shocking new allegations are being made about Quad Webb-Lunceford by the website allaboutthetea.com.  A link to their full story is in the description box.  They EXCLUSIVELY report that Quad “has a cheating scandal of her own.”

But before we get into the details, I want to remind you that these are unverified allegations with no actual proof or evidence.  I’m sharing these allegations with you here, since I also shared the allegations that Quad’s husband was unfaithful to her.

“AllabouttheTEA.com has learned that Quad cheated on husband, Dr. Gregory Lunceford — with the brother-in-law of the show’s creator and executive producer, Mariah Huq.

A source allegedly told AATT “Quad slept with Mariah’s sister’s husband while they were best friends. Quad hates Mariah, because Mariah has her number. Mariah has inside knowledge of the affair, and that makes Quad uncomfortable. She knows that she betrayed not only her husband, but her best friend.”

“When Mariah’s sister, Lekeeda “Lake” Kelley, discovered Quad was sleeping with her husband, she pulled up at Quad’s residence and proceeded to whoop her ass. The attached police report documented the altercation. Ultimately, the affair led to the demise of Lake’s marriage.”

Here is a copy of the police report which was filed in Smyra, GA.  The name of the police officer officer who took the report’s name has been blacked out at the top of the page, however it is visible at the bottom.  So I did a little digging and I did find a police officer by this name that did work at the Smyrna GA police department at the time of this incident, so this police report may be authentic.  Or if it is a fake police report, someone went through great lengths to make it look authentic by using the name of an actual police officer that worked in Smyrna GA at the time of the incident.

In any case, the police report says: 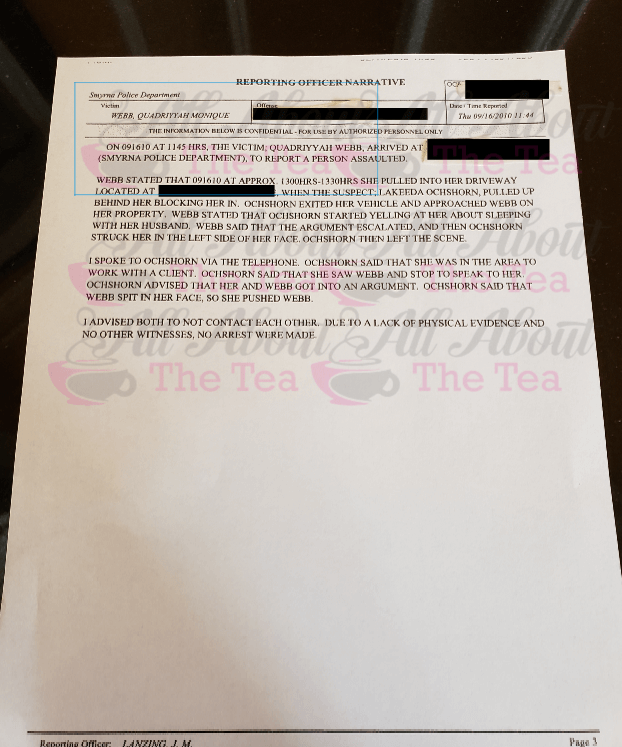 You can read the rest of the story and get more details by clicking the link to AATT in the description box.

But let me give you my opinion: even if this police report is authentic, it doesn’t prove that Quad actually slept with Lake’s husband.  It only proves that Lake ACCUSED Quad of sleeping with her husband.  There’s a big difference between real receipts that would actually prove that Quad slept with Lake’s husband, and receipts that just show what Quad was accused of doing.  And in my opinion, this alleged police report only proves that Quad was ACCUSED of sleeping with Lake’s husband – which could be true or untrue.  Anybody can accuse anybody of anything at any time – that doesn’t make the accusations true!

And I just find it odd, that as much as Mariah and Lake run their mouths about Married to Medicine behind the scenes when Mariah does her after shows, that she has not mentioned this information.  You would think that if Mariah’s ex-best friend (Quad) slept with her sister’s husband, that Mariah would have exposed it by now.  But she never has.  And this website says that they contacted Mariah, and Mariah specifically asked them NOT to put out the story.  So the fact that Mariah did not want the story to come out makes me think that there’s something about the story that is either not right or that is missing.

But leave a comment and let me know what you think!

One thought on “An “Insider” Accuses Quad Webb-Lunceford Of Creeping With Mariah Huq’s Brother In Law! But Where Are The Receipts?”