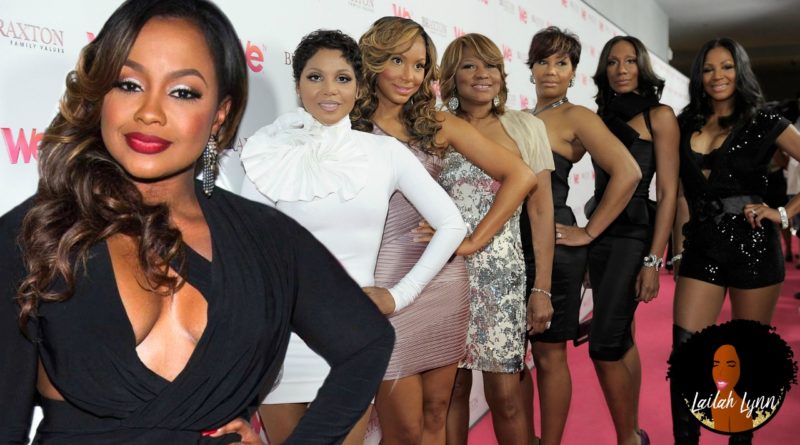 More information about Traci Braxton, Braxton Family Values, and even Phaedra Parks role in all this is spilling as we speak!

As I previously reported, the Braxton Sisters – Toni, Tamar, Towanda & Trina – are on a hiatus from WeTV production until WeTV gets their money right.  However, Traci Braxton is NOT on strike with her sisters.  She has been filming and promoting Braxton Family Values without them.

As a matter of fact, she is on a promo tour as we speak, stopping by different news outlets and promoting Braxton Family Values.  And she has been joined by none other than Ms Southern Belle herself, Phaedra Parks!

Phaedra Parks will actually be joining Traci Braxton on Season 6B of Braxton Family Values!  While Traci’s sisters are out on strike, WeTV has brought in Phaedra Parks (along with a few other reality starts) to film with Traci.

Traci Braxton and Phaedra Parks might not sound like they belong on the same show together.  But when you keep in mind that they are actually working on a talk show together that is rumored to have been picked up by WeTV, then it all starts to make sense.

Remember a few weeks ago when people were reporting that Phaedra Parks had gotten her peach back.  That’s actually because she was on Instagram Live drinking a Peach bellini while she reviewed Bridezillas on WeTV.

Phaedra randomly doing live reviews of Bridezilla’s might seem strange.  But it’s really not when you consider that her new talk show is with WeTV.  The same network that produces Bridezillas.

So Phaedra is basically doing whatever WeTV needs her to do to promote all of their shows.  She’s reviewing Bridezilla’s on Instagram.  And she’s now appearing on Braxton Family Values with Traci.  Phaedra & Traci went on Fox 5 NY today and talked about how they linked up:

Hopefully, soon we’ll see Phaedra, Traci, Natalie Nunn & Luenell on WeTV with their show! But before then, Phaedra and Traci Braxton will be linking up on season 6B of Braxton Family Values.

Leave a comment and let me know what you think of Phaedra joining Braxton Family Values.  Will you be watching???