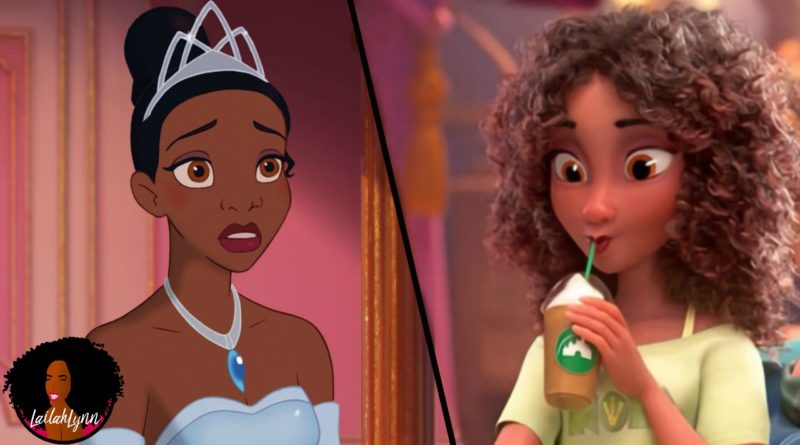 The trailer for the upcoming Disney move Wreck It Ralph 2 – Ralph Breaks The Internet just premiered and it features a reunion of every Disney princess you can think of – including a new  version of Princess Tiana!

Princess Tiana debuted in 2009 and was the first African-American Disney princess ever! Her dark skin and wide nose were not typical features seen on Disney princesses.  But those same features are what resonated with young, Black girls.

But now her dark chocolate skin has been lightened to a caramel hue.  And her nose appears much thinner than before.  And although she’s been given natural hair, the color has been changed from black to light brown.

Before we get too far into this I just want to say that the outrage that people are expressing at the questionable makeover of Princess Tiana is not necessarily about her being light skin with a thin nose and brown hair.  People of color come in all shades with different features and hair colors.

But when a character is presented first one way – with dark skin and a wide nose – and then given a makeover to have lighter skin and and a thinner nose – it makes it seem as if Disney is saying the  new version (with light skin and a thin nose) is the better version. And that’s just not right!

Black Twitter has been calling Disney out for the apparent white washing of Tiana.  This person tweeted:

In today’s edition of “you tried it,” Disney decided to reinforce colorism by lightening Princess Tiana’s skin in #RalphBreaksTheInternet. Tiana was a dark skin Black woman in Princess and the Frog, now she has light skin and Eurocentric features. What happened to her wide nose? pic.twitter.com/YnX9eFPLm9

And this person pointed out that just 2 months ago Princess Tiana was still dark skinned.  She tweeted:

why does princess tiana look so different from the wreck it ralph trailer we got 2 months ago to today’s new still……….let me know pic.twitter.com/h63b4DXE03

And this person tweeted:

Y’all don’t understand how important Princess Tiana is to Black girls. We finally had a Disney princess that looked like us, and now, she doesn’t. They gave her Eurocentric features and turned her into a racially ambiguous woman. It’s a no from me, dawg.

And another person wondered if the original Tiana was ‘too hard’ to digitize.

I’m extremely confused as to who this is… was Princess Tiana’s skin tone and dark hair too hard to digitalize? pic.twitter.com/M2f30gjiBR

What do you think of Princess Tiana’s makeover? Does she look significantly different to you? Do you think it’s just the different animation style that makes her look different?