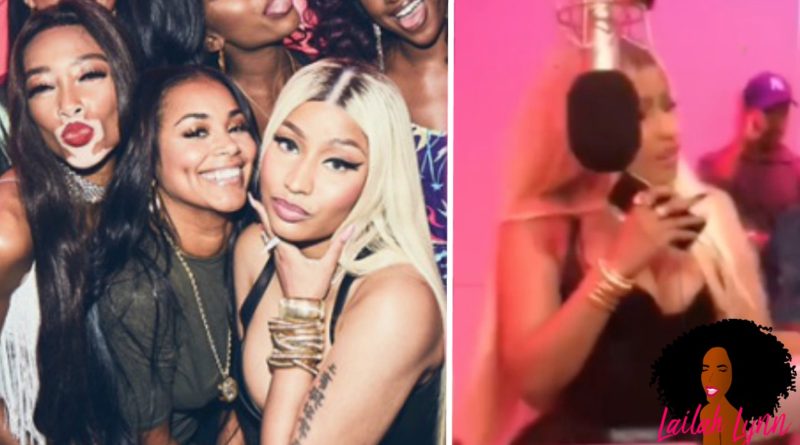 In case you missed it, Nicki Minaj had her album release party last night on Beats One radio where she is now hosting her own radio show. Her radio show is called Queen Radio and it’s on Apple Music’s Beats 1 station.

During the show Nicki was set to preview her album, which she managed to get a release date for today – August 10 – although it was previously delayed until August 17.

As I mentioned to you guys on Wednesday, Nicki’s mother Carol Maraj is doing a “tell all” interview about her brother’s child rape case, which was initially scheduled for August 8th but has been rescheduled for August 11th.  Hopefully it will actually get cancelled and not take place at all!  But in the meantime, Nicki Minaj has been trying to beat her mom to the punch and release her album before her mom does this tell all interview about her brother’s case.

In any case, Nicki’s Queen album was supposed to drop last night at midnight.  But it was actually delayed until noon EST, and Nicki found out while she was live on the radio at her album release party.

Nicki had a ton of celebrity guests in the building like Kelly Rowland, Lauren London, Kim Kardashian, and she even had beauty influencers like Jackie Aina and Aaliyah Jay.  But the only person I saw that put Nicki Minaj’s meltdown – when she found out her album was being delay from midnight to noon – was Winnie Harlow.

Winnie posted Nicki Minaj going off on her label on her Instagram story.  And even made fun of Nicki’s vocabulary, because apparently her own vocabulary is much more limited.

Jackie Aina and Aaliyah Jay were in the building and I don’t see any posts of them making fun of Nicki Minaj at her own party.

And Kelly Rowland and Lauren London were also there and I don’t see them posting Nicki Minaj’s meltdown either.

Kim Kardashian was also there.  And some of y’all say she is the queen of attention seeking on social media, but I don’t see her posting about Nicki Minaj’s outburst either.

Personally, I think it was immature and unprofessional of Winnie Harlow to share that particular moment of Nicki Minaj going off on her record label on social media, especially since she was an invited GUEST to the party.

Leave a comment and let me know what YOU think!

By the time you’re watching this video Nicki Minaj’s album will have been released – just one day ahead of her mother’s scheduled “tell all” interview.

Will you be buying it? Leave a comment and let me know!