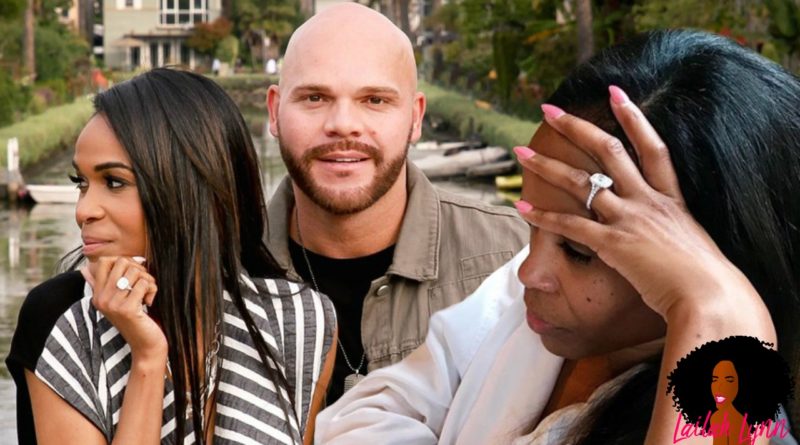 After Michelle Williams announced on her Instagram on July 17th that she had checked herself into a mental health facility for depression, a lot of her fans (and her haters) wanted to know what sparked her depression.  Considering that she’s 1/3 of one of the most successful girl groups on the PLANET, and she’s also recently engaged, I can see why it could be hard for people who don’t suffer from depression to understand why she was depressed.

But I was surprised when I started to see comments blaming her new fiance, Pastor Chad Johnson, for her depression.  It seems a post that her fiance made on Instagram, that was supposed to be positive, is causing people to think the worst – about him!

Michelle’s fiance, Pastor Chad Johnson posted a picture of the two of them on a boat on Instagram with the caption:

I missed the IG birthday shout out to my beautiful and (insert a million more phenomenal adjectives here) fiancé, due to all we have been facing as of late! Today, I’m “In My Feelings” (not over KeKe either! 😂) because doing LIFE with you @michellewilliams has been one of the greatest experiences anyone could ever have, EVER!
This pic was a year ago, when the world found out about “US”… back then, our relationship was flooded with puppy love, a ton of laughter, with fun and new experiences…. but it essentially was untested!!!!
If someone would’ve told me that a year later we would have faced all that we have in such a short period… I wouldn’t have believed them and/or ran like my name was Forrest!

Now this is the part that has people questioning Chad.  The fact that he said he if he had known a year ago all they would have to face in such a short period of time, he would have run like his name was Forrest Gump, is what has people thinking that maybe doesn’t love Michelle as much as he says he does.  Because clearly if you really love someone, then you wouldn’t run away when you see that they are in need.
Anyway, he continues…

Today, as the world has dimly seen, we have been tested beyond what I could’ve imagined, proven beyond what I could have desired, and persevered like ONLY God can carry us through (this pic says it all)! Through it all You have remained with a pliable and moldable heart in the hands of our Maker, and that makes me love you even more!! Happy Birthday (ig late) baby! Here’s to All Of me for All of you! 🥂 I love you! #restart

The #restart also has people wondering if Chad means they are re-starting their relationship as if something was wrong with it in the first place.

See also  Pastor Jamal Bryant Apologizes For Calling Out Kevin Samuels "High Value" Rhetoric
Powered by Inline Related Posts
But Michelle Williams took to her own Instagram to shut down the haters that are blaming her fiance for her depression.  She posted this message on her Insta-story:

You can not and do not know a person simply by what they post on social media.  That being said…stop trying to put “two and two together!” You will fail every time!  You can’t determine the status of people’s lives, relationships, etc by lurking on their profiles.  It may help but it doesn’t tell the whole story! Love you!

Michelle and Chad are rumored to have a reality show in the works so maybe we’ll get to see the whole story when it comes on TV.  A radio DJ from KIIS FM recently reported that he actually ran into Michelle Williams on an elevator at a hotel in Los Angeles while she was filming her reality TV show.
He said she got off the elevator at Level 5, which is the pool level.  And the reality tv show producers told him he would have to sign a waiver to get off there too because Michelle was filming her reality show.

‘She gets off the lift at level five, which is the pool level. [TV producers] said you have to sign a waiver because Michelle is filming her reality show here today.’

So what do y’all think about people blaming Michelle’s fiance Chad for her depression? Do you think his Instagram caption revealed problems in their relationship?  And what do y’all think about her filming a reality TV show so soon after being released from the mental health facility.
Personally, I think doing reality TV might NOT be the best option right now for Michelle since her relationship is so new AND she’s battling depression – which is a huge fight!
Leave a comment and let me know what you think!