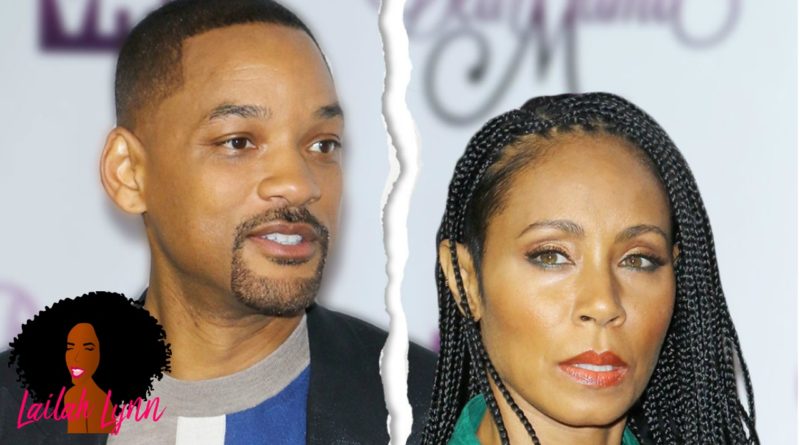 This is an official Rumor Report. If you’re familiar with my channel, then you know that every now and then, I come to you with a report of a rumor so big or so believable – that we just have to sit down and talk about it.  So today I want to talk to you guys about the rumor that Will Smith and Jada Pinkett Smith are no longer LEGALLY married!

I’m not saying they’re not together anymore. I’m just saying the rumor is, that they are not LEGALLY married on paper anymore.  But they’re still together.

Word on the curb is, Will & Jada have legally ended their union and have now moved on to “higher level” in their relationship and have what is called a  Life Partnership.  Now, I know this sounds crazy, but I have heard a few celebrities refer to having “life partners” instead of wives because they feel that the legal marriage – on paper, in black & white, is too limiting for them.

The first person I heard use this term was Prince, when he explained why he divorced Mayte Garcia on The View several years ago.  He explained that being married legally made him feel a sense of  legal ownership toward his wife that interfered with their love for each other, so he had to get rid of that sense of ownership by getting rid of legal marriage.

And I’ve also heard Diddy refer to Cassie as his “life partner”.  So this is something that is somewhat popular in Hollywood, and the Smith’s are very Hollywood.

This is the rumor from MTO, and I am just going to fill in the names as I read it:

[Popular couple] went through marriage counseling and tried to save their marriage and repair the problems [Male Celeb’s] infidelity caused. Post counseling [Male Celeb] did not change his ways and [Wife] is tired and wanted out but didn’t want the public backlash since they are Black marriage royalty.

Pause: In an interview with Rap Radar – that is only available on Tidal – Will Smith did admit that the rumors years ago that there was trouble in his relationship with Jada were actually true.  But he said they worked through them.

They no longer say they are married and use the “life partner” title as a way to distract from the truth that they’re really no longer legally together. They share children so they will be in each others lives forever but [male celebrity] is dating other women and will continue to be seen publicly with women because legally he’s a single man.

Pause: I just want you guys to take a look at the headlines of Will Smith confirming that him and Jada no longer call each other husband & wife.  It does lend credibility to the rumor that they are actually not LEGALLY husband and wife anymore.

The show has really been therapeutic for [wife] and she was really emotional over the segment she did with [An ex] because she now feels the pain that[The ex] felt when [Wife] was hell bent on taking her husband.

Pause: The show they are referring to is Red Table Talks, and the ex is allegedly Will Smith’s first ex-wife Sheree Fletcher.

Karma is a bitch and although[The Ex] kept it classy with [Wife], she laughed her ass off behind closed doors and mentioned how everything that glitters isn’t gold.

[Male celebrity] only married [Wife] because she was pregnant, she was 3 months at the time of their wedding. All the we were so happy in love stuff was all a lie and it’s why [Male celebrity] has continued to carry on affairs throughout their marriage because [Wife] never truly made him happy.

Pause: This is a fact.  Jada was 3 months pregnant with Jaden when she and Will Smith got married.  They got married on December 31, 1997.  And Jaden was born July 8, 1998 – so clearly she was pregnant when she got married.  And that may be why she had that huge bridal bouquet when she walked down the aisle.  If you’ve ever gotten married when you were secretly pregnant, then you know the bigger the bouquet, the better! So that you can hide that baby bump!

In the interview that Will did with Rap Radar he said:

We don’t even say we’re married anymore. We refer to ourselves as life partners, where you get into that space where you realize you are literally with somebody for the rest of your life. There’s no deal breakers. There’s nothing she could do — ever. Nothing that would break our relationship. She has my support till death and it feels so good to get to that space.

Now, if you are really LEGALLY married, why would you stop saying that you are married? It doesn’t make common sense.  It’s very strange and it’s very weird, BUT, you have to remember we are talking about people in Hollywood.  Hollywood is very different from the rest of the world in a way.  And people do very strange things.

So it wouldn’t surprise me if Will & Jada did get rid of their legal marriage to be on some “higher plane” where they are life partners instead of just common husband and wife.

Now, I do want to refer to a recent interview that Jada Pinkett Smith did with Sway In The Morning, where she said she would never divorce Will Smith.  She specifically said:

We are family. That’s never going down. We are family. Take out all that whole marriage, relationship crap, at the end of the day, Will and I are family. I am going to hold him down, doesn’t matter.

All that relationship [stuff] and what people think ideas of a husband, partner and all that, man, whatever. At the end of the day, that is a man that can rely on me for the rest of his life, period.

So it sounds like Jada has no respect for marriage anymore, because she called marriage “crap”.  And that’s why this rumor that they are no longer legally married is gaining traction!
And listen, their daughter Willow, already said that she doesn’t believe in monogamy.  She said that on an episode of Red Table Talks.  And she must be getting her beliefs from somewhere.  And to me, it sound like she could be getting the belief that monogamy and marriage is not sacred, from her own parents who have chosen to be “life partners” instead of husband & wife.
What do you think? Do you think it’s possible that Will & Jada are no longer legally married and are instead “life partners”?  Do you think they’ll ever admit to getting a divorce?
Leave a comment and let me know what you think!