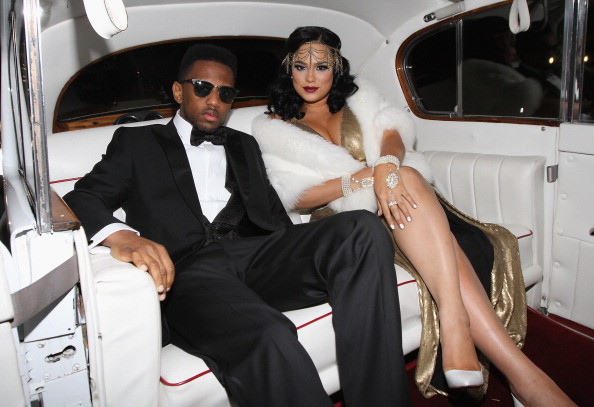 Pop Culture Relationships
May 9, 2018 lailahlynn emily b, fabolous
Share this article to start a conversation!

On March 29 Fabolous was arrested for alleged domestic violence against Emily B.  And video footage surfaced of him threatening Emily’s family when they confronted him about abusing Emily.

The allegations are that Fab allegedly struck Emily a total of seven times, which ultimately caused “severe damage to her two front teeth.”  And her front teeth had to be medically removed.

Because of this, Fabolous is facing charges of one count of aggravated assault in the third degree and one count of making terroristic threats. The assault charge alone is enough for Fab to face three to five years behind bars in state prison along with up to $15K in fines if he were to be convicted.

So with all that happened between them and the charges that Fabolous is facing, some fans were surprised to see the two together at Coachella. In this video you see Fabolous following behind security and you can see the top of Emily’s head walking right behind Fabolous.

Personally, I wasn’t surprised to see them together at Coachella because Emily B seems like one of those women that will just keep going back to an abusive man.

And I wasn’t surprised to see him leaving the heart emojis under one of her pictures on Instagram the other day either.

But what I am surprised about is reports that Emily B and Fabolous may have gotten married!

MTO is reporting that Emily B and Fabolous may have ELOPED.  TeaTenders ( @teatenders_liv)obtained a photo from a barbecue that shows Emily and Fabolous together very recently.  And Emily appears to be wearing a diamond wedding band on her finger.

Fabolous was scheduled to appear in court on April 18 to face the charges against him, but at the last minute his lawyers asked that the date  be rescheduled.  And their request was granted in the form of a three-week postponement.

So it seems in the three weeks between April 18 and today, Emily B may have agreed to marry Fabolous so that she could refuse to testify in the case and hopefully keep him out of jail.

What do you think about the ring on Emily’s finger? Do you think she agreed to marry Fabolous so that she couldn’t be forced to testify? Leave a comment and let me know!