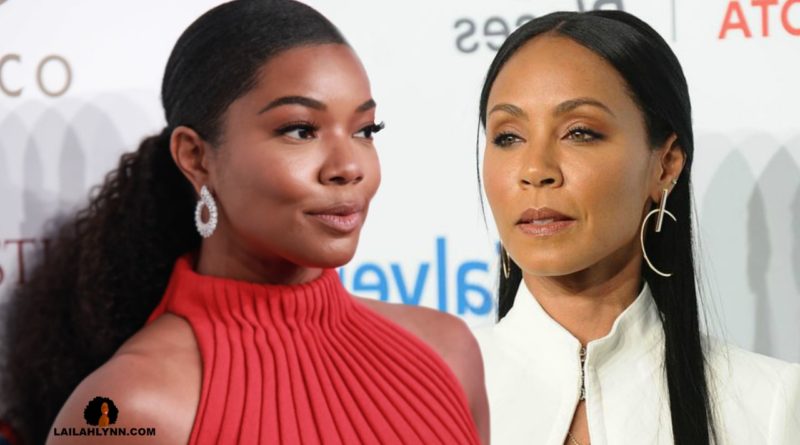 Back in 2013, Actress Gabrielle Union received the Fierce and Fearless Award at the Black Women in Hollywood Luncheon.  In her acceptance speech, Union discussed being a mean girl to her fellow Black actresses and how that experience has shaped her to become a better a woman.

But despite vowing to be a better woman to women in 2013, she still kept up her “silent feud” with fellow actress Jada Pinkett Smith.

Jada Pinkett Smith has been promoting her new Facebook Watch Show, Red Table Talks, in which she sits down with her mother Adrienne and her daughter Willow and discusses life issues.  And in one of the episodes she actually has a sit down with Gabrielle Union as well.

Tanika Ray, from “Extra” sat down with Jada Pinkett Smith in West Hollywood today to talk about the new show.

During the sit down, Jada  told Tanika:

I have a really touching episode with Gabrielle Union. We haven’t been on the best of terms for 17 years, and we have a reconciliation.”

When the producers said we want to do a girlfriends show… her name just kept coming up… it just couldn’t be anything else.

When Tanika asked if the beef was over, Jada said,

Oh, definitely. We don’t even know how it started!”

When Jada says she doesn’t know how the feud started, it makes me wonder if she’s trying not to throw Gabrielle Union under the bus for starting the feud, especially since Gabrielle has admitted to being a “mean girl” in the past.
But, being that Jada specifically said the beef started 17 years ago, we have a clue of how it started.
Bad Boys 2, where Gabrielle Union starred alongside Will Smith, wasn’t released until 2003 – but it was actually filmed and produced a year earlier in 2002 – almost 17 years ago! And it’s around this time that Jada and Gabrielle Union’s silent feud began.
In the movie, Gabrielle Union plays Will Smith’s characters love interest.  And they actually share an on-screen kiss.
So it sounds like Gabrielle Union was in “mean girl mode”, which she admitted in her speech about being a mean girl, and kissed Jada’s husband on camera then completely stopped speaking to Jada!
So from then, 2002, until now – almost 17 years the ladies haven’t spoken to each other, despite working in the same industry!
And now that Bad Boys is getting a TV spinoff starring Gabrielle Union, the ladies have decided to finally end their silent feud and sit down and talk.  Although it’s not clear if Will Smith will be involved with the Bad Boys TV spinoff.
BUT it should be noted that despite Gabrielle and Jada feuding, Will Smith and Gabrielle Union have been on good terms.  Will even attended Gabrielle’s 40th birthday party and performed a freestyle.
So what do you think? Do you think Gabrielle instigated the feud when she was in her mean girl mode back in the day? Do you think Gabrielle kissing Will on camera, then refusing to speak to Jada had anything to do with it? Leave a comment and let me know!