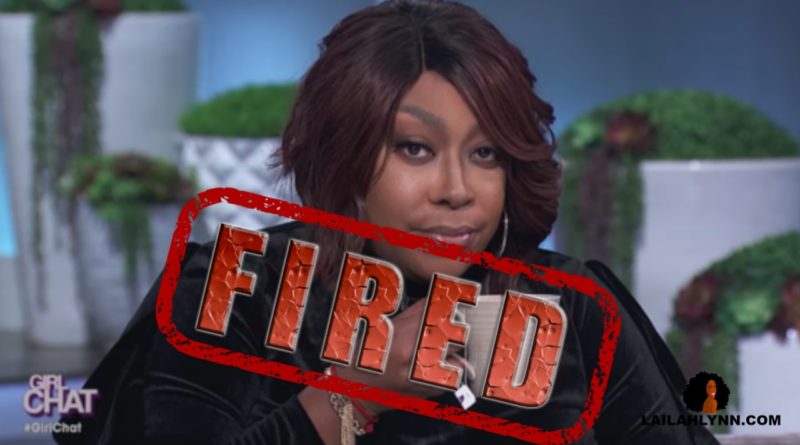 According to Media Takeout, Loni Love is next on the chopping block over at The Real!  Their sources exclusively tell them that the producers of The Real are considering firing Loni Love and replacing her with a White woman.

Now, this sounds like a joke and ordinarily I wouldn’t pay much attention to a story like this. HOWEVER, prior to Tamar being fired from The Real, Media Takeout was one of the only blogs to report the rumors that producers were thinking about firing her.

So being that Media Takeout had the tea on Tamar being fired from The Real before it happened, I think their source over at The Real might just be credible.

They want the panel to be less Black, and they’ve had trouble with Loni in the past. So I think she’s out.

Allegedly, the producers believe that by adding a ‘white’ host to the panel, it could help bring more white viewers to the show.

I don’t know if I believe that the producers of The Real want to add a White co-host, because part of the show’s selling point is that four women of color are able to connect with women of ALL colors, including White women – without actually having a White co-host.

According to MTO, another issue producers have been having with Loni is they feel she comes across as dismissive and disengaged in many of the topics. Behind the scenes, Loni’s been pushing for more political topics and would love for the show to go in a direction similar to The View.

Now, that I can believe because Loni Love does look disengaged on some of the topics and she does act like she doesn’t want to talk about certain things.

But allegedly, producers are upset about that. They actually want to dedicate more topics to celebrity drama since that’s what their viewers respond to best from them.

Just a few hours ago, Loni Love compared The Real to The View on her Instagram.  She said:

Still love The View and all the other shows that empower women.. that is why when we accepted The Emmy I made sure to thank the nominated shows.. Whoopi even sent a basket congratulating The Real… if anyone watched The Real this week you saw us discuss Mute R Kelly, Bill Cosby , and the Kanye interview.. The Real has fourth of the budget that The View has but we continue to highlight women with the hot line bling calls and give exposure to things that effect women of color. They can keep talking to politicians but we talk to the people!!!

So I am getting two things from this caption:

I’m trying to keep tackling hosting. In daytime, women have always traditionally hosted. But in late-night, it’s always been a challenge. I want to tackle a late-night gig. … I helped Chelsea [Handler] with her show… That’s where I’m going next, tackling late-night in the prime-time space.

So Loni Love might get the opportunity to do late night TV sooner than we think, because she just might be getting fired at The Real!

What do you think? Do you think it’s possible that Loni Love might be getting replaced at The Real? Do you think she’ll move on to her own late night talk show? Leave a comment and let me know!