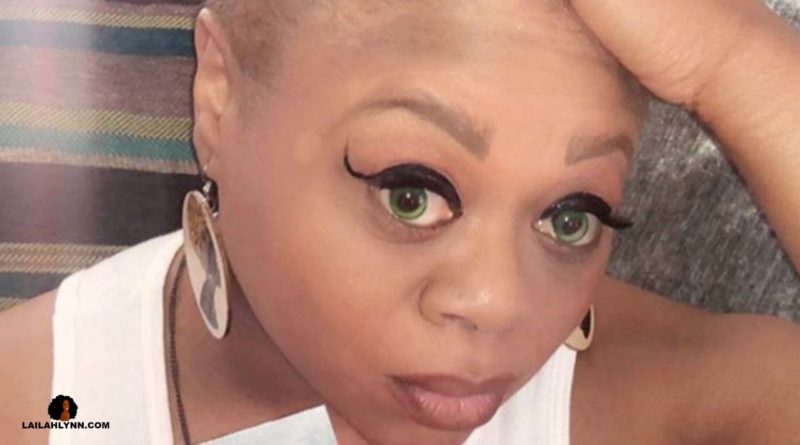 Actress Countess Vaughn recently posted a picture of her doing an ad for one of those diuretic companies on Instagram, and her hair (and eyes) are getting more attention than the actual ad itself.  It looks like Countess Vaughn may have done a “big chop” similar to what Tamar Braxton did when she went bald a few weeks ago.

Countess Vaughn has shared her struggles with wigs in the past, particularly the glue that’s used to apply lace front wigs.  She appeared on an episode of “The Doctors” and shared that wearing lace front wigs actually gave her a scalp infection. She began wearing them in 2004, and didn’t have any problems until five years later, when she began having a bad reaction to the wig glue.

She admitted that she let the infection go by for six months before seeing a dermatologist when her hair started to fall out.  She said every time she took her wig off it was like “taking off a layer of skin.”

At that time, Countess admitted to actually DRAWING her hairline on with an eyeliner pencil. But from the look of her latest picture on Instagram, she’s not drawing on her hairline anymore.  And she doesn’t seem to have hardly any hair at all anymore.

I am more concerned seeing Countess Vaughn wear what look to be lace front wigs after admitting that she had a skin infection because of them.  I cringe every time I see Countess wear a wig ever since she went on The Doctors and shared how much damage the wig glue did to her skin.

So, for me to see her rocking her real hair – whether bald or not – is a good thing.  Especially, rocking it in public!

She once said she was so embarrassed when her hair was falling out due to the scalp infection, that she felt that she had to stay home if she was bald.

“I was embarrassed, you have to be at home, and be bald. I had to go through this to teach my little one that you have to love yourself before anyone else will,” she said.

But now it seems like she is not ashamed to rock a bald head anymore because she’s doing it on social media for the world to see.  I wonder if seeing Tamar rock her bald head inspired her.

I saw a lot of women comment on my videos that they did their own big chop after Tamar did hers, so despite people making jokes about it, some women are being inspired to cut off their damaged hair and rock a bald head.  It takes a lot of confidence to do that, and I applaud it!

Leave a comment and let me know what you think of women choosing to rock bald heads rather than wigs and weaves!

One thought on “Countess Vaughn Debuts Her New Bald Look”